We're Halfway to a Lost Decade

Our current slump began a lot earlier than you think. Which means that we’re half way to a lost decade.

Many people date the financial crisis as beginning when Lehman collapsed in September 2008.  But the economy was already in recession. The NBER reckons the recession began in December 2007. But look closely, and you’ll see that it may have begun a year earlier.

That’s the case I made in my latest my latest Marketplace commentary, which you can listen to here. The point is more easily made with a simple graph: 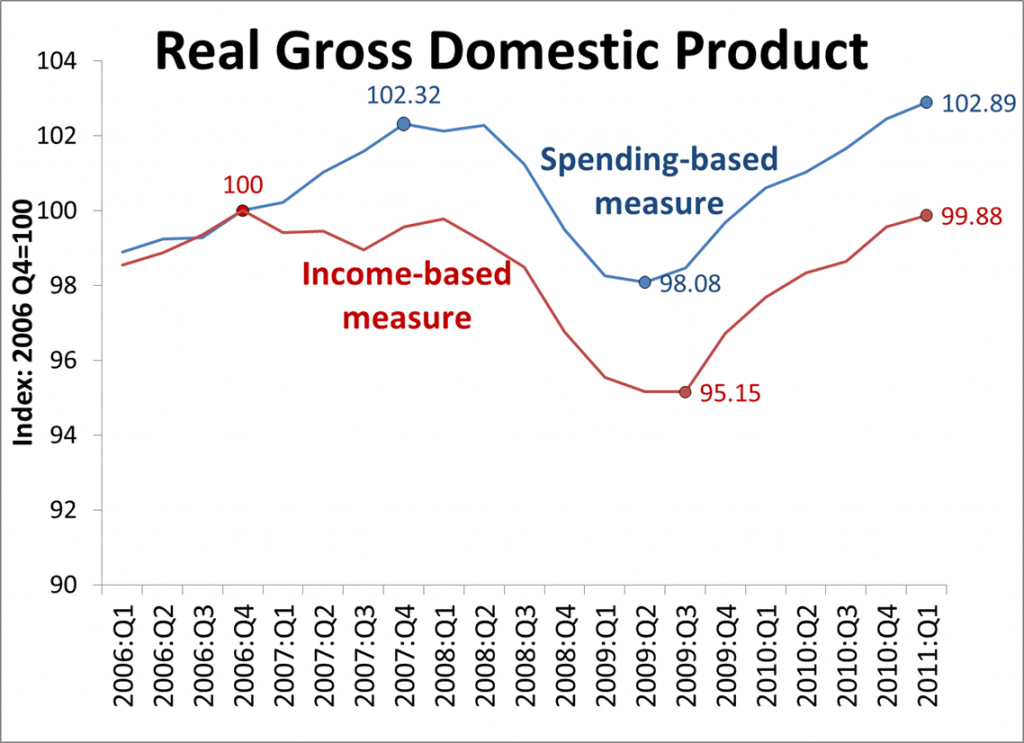 The blue line is the usual measure of GDP, which is obtained by adding up total spending. When you read the newspapers, this is the number they report. But the Fed’s Jeremy Nailewaik has convincingly shown that red line—which is the sum of all income—is the more reliable measure.  In theory the two lines should be identical—one person’s spending is another’s income—but in practice, the measurements differ. I’ve also plotted the peak, trough, and latest reading of each measure.

Focus on the red line, and you’ll see that the recession began in the final quarter of 2006, not the end of 2007. The red line also fell by more, and over a longer period. And today, GDP remains below its levels nearly five years ago. The economy had already run out of steam halfway through Bush’s second term. That’s why I say we are halfway to a lost decade.

Even this isn’t a fair comparison, as the population has continued to grow. So let’s transform these into per capita numbers: 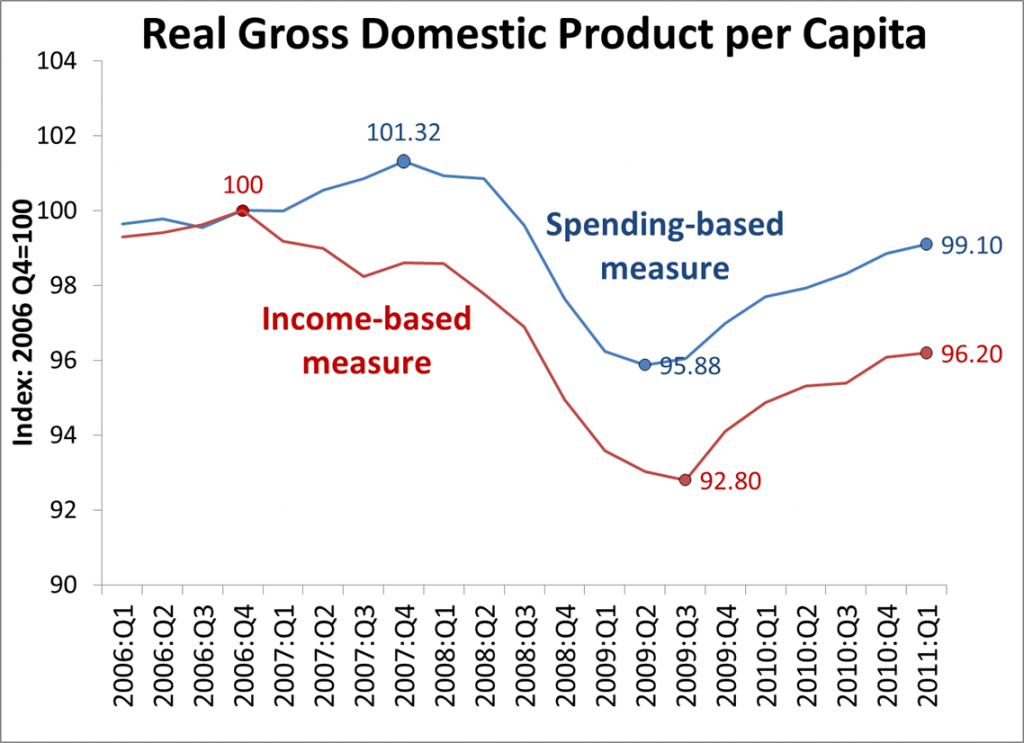 4.      It’s going to take a long while to return to where we were back in 2006. Most forecasters are expecting GDP to grow by around 3 percent, implying per-capita growth closer to two percent. At those rates, average incomes in 2013 will (finally!) be back around the levels of 2006.

Finally, it’s worth emphasizing another key statistical finding from Nalewaik’s research: Over the next few years the Bureau of Economic Analysis will continue to revise their estimates of what has happened, and if history is any guide, their revised estimates of the blue line will look a lot more like the red line.

Last quarter 2006 is about right based on the bellwether heavy duty tractor- trailer truck industry production going downhill per the 2007 increase in emissions costs. The heavy truck industry is just now recovering. This industry is a bellwether due to the need (-or lack of -) to transport goods and commodities.

I would like to see this data continued into the past more to see what historical norms are like.

It could be that when the two values were indexed (Q4 2006) could be a time where the income-based to spending-based ratio just happened to be really high. The main changes are between Q4 2006 and Q4 2007. It could be that this ratio was just regressing back to the mean.

How does the current chart of GDI compare to that of the late 1920's?

Please help the ignorant: does the gap between the spending curve and income curve get spent "overseas"? Where did that money "go"?

Also, where did the money in the gap between spending & income come from?

This certainly conflicts with the usual picture of the years prior to 2008, when people were supposed to have been financing excess spending with home equity loans and consumer debt.

There is no money in that gap. It's not a gap between any two real things. It's just a difference in how one single thing is measured.

But our measurements of total spending, and of total income, are subject to errors. The question is, for this particular time period, which of the ways of measuring GDP is closer to reality.

I do take issue with: "Many people date the financial crisis as beginning when Lehman collapsed in September 2008."

Maybe many ignorant people...There was certainly a lot of hand wringing and worry in early/mid 2007.

And people were talking about the coming reckoning on marketplace and in the economist as early as 2003, or 2004. I know I wasn't the only one who heard all those stories about home prices becoming decoupled from incomes. Maybe the war was too distracting for people to remember clearly?

I'd think that the gap is largely about CREDIT. The spending-based measure peaked when the declining economy (and home price peak) became very visible even to the most naive consumers, and then collapsed when credit went away entirely in 2008. No more home-ATM means no more spending.

Plot a rise in fuel prices and you will also see why the economy finally collapsed.

That is when the Democrats took control of Congress.

And they immediately destroyed the economy in their first act of congress, as they were being inaugurated?

No, I'm thinking that employers saw what was coming and took immediate steps to defend themselves. Cut costs, rein in spending, etc.

Elections do have consequences, you know, and Congress does not seem to grasp that the things they do have real world effects, not merely theoretical.

A big part of Washington's problem is an over-abundance of theoreticians.

You don't think maybe it was all the spending under Bush. You're aware he doubled the national debt. That's quite a feat, but Reagan tripled it.

Now the republicans are screaming about debt and blaming democrats. Don't misunderstand, there's plenty of blame for democrats too.

But I can't believe that you look at the situation we are in, huge deficits, reduced local business ownership, outsourced jobs, etc and then reduce it to "democrats did it".

I can't believe that you aren't thinking more about it. It's like a religion. Something happens, and then you instantly mold it to your pre-existing belief system.

I think you should collect data before making conclusions.

I am just a part time blogger, but I have a time stamped dated post calling the recession before anyone "real" did:

On some measures, like employment and median incomes, we're halfway through a lost score. Private employment growth during the Bush years was non-existent and many families made it through by refinancing their homes to take our equity.

I am very impressed with this post, even if I am reading it retrospectively and directed from Paul Krugman. I've read your most famous book and seen the movie.

I would like to interject that the only thing I've ever disagreed with you about is gambling legalization. But perhaps you would accept that it fails your "Would I like my daughter to be doing this test?" because gambling can be an addiction that is as disabling and life destroying as opiate drugs. I know this because my son started online gambling in college and it has had a very negative effect on his life and the lives of the people that love him.

I agree with some others--it is disingenuous to show a graph and try to divine something from it without understanding the causative factors.

This is just reading goat entrails.

I'm left with the big question" What happened? Was this the date that giving to the rich ran out of Clinton's savings? Or what?

I should point out that a decade is only lost in comparison to other countries on the world stage. The 2008 crisis has been wide ranging that the United States has a lot of company in the economic slow lane. China is just about the only exception due to their beggar thy neighbor policies.

Either way I believe that we are reaching the limits of GDP as a metric to accurately describe an economy. Technological advances are continually reducing the need for workers while at the same time population growth in many countries has entered or will enter decline. The growth centric GDP model is ultimately unsustainable as the world become more and more resource constrained. You can't just keep adding people forever and fortunately it doesn't seem that developed countries have taken the opposite approach. Anyway I believe we are approaching the day where people on average will have much less in terms of income, but be much more content in terms of their life situation. They won't be "settling", but instead the cost of what can being contentment will be very very low allowing for much lower incomes.

I find it very interesting that you say in 2013 income levels will finally return to their peak of 2006. Many budget cuts over the past few years have been fierce and it seems that all institutions have a hard time scaling back their spending after they've had the budget previously allotted to them. For example, I remember in 2010 at University of Arizona, they called budget cuts that reduced them to 2007 levels of funding totally draconian and unworkable and protests were organized on the steps of the state capitol ("you're stealing our education! We cant reed good becuz of u!" etc). Eventually they just raised tuition to bridge the gap because they were unable to scale their spending to what a was a few years ago.

But in your analysis, households would be grateful to have income 2006 levels and spending power at 2007 levels.