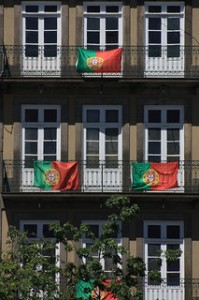 The BBC reports that Portugal will be cutting 4 of its 14 public holidays as an “austerity measure”:

Two religious festivals and two other public holidays will be suspended for five years from 2013.

The decision over which Catholic festivals to cut was negotiated with the Vatican.

It is hoped the suspension of the public holidays will improve competitiveness and boost economic activity.

The four days affected are All Saints Day on 1 November; Corpus Christi, which falls 60 days after Easter; 5 October, which commemorates the formation of the Portuguese Republic in 1910; and 1 December, which marks Portuguese independence from Spanish rule in 1640.

A recent report on British public holidays (they have nine) finds that the holidays cost the British economy more than £18 billion ($29 billion) — about £2.3 billion ($3.7 billion) on average. The researchers noted that while shops and restaurants benefit, all other sectors lose out, resulting in a net loss. It makes you wonder about Austria, the country with the most holidays in the world. This excellent graphic from The Economist indicates that Greece is second on the list.

We Brits get an EXTRA holiday this year for the Queen's Jubilee (also had one last year for the Royal Wedding)... God Save the Queen!

Wow, that chart would almost convince me that required vacation days has little relationship to GDP growth (although maybe more vacation is related to greater per person GDP, if you take out the US and Canada). But we all know that the current crisis in Greece, Spain, Portugal, Italy, and Ireland is a result of a Calvinist moral failure, so clearly "more vacation = more recession" no matter what the numbers actually say.

this just in- sleep costs Spain @ 20 billion euros!- so much for sleep and productivity studies...

Notice that for the US there is no mandatory minimum number of vacation days.
They just pick a "typical" number.
This results in an inappropriate comparison for the U.S.

Would have been fine to compare public holidays.

I for one think NYC should stop celebrating Ko?ciuszko Day.

The chart is misleading for India for sure. The typical workweek in India is 6 days and not 5 days. A chart with average number of work days per year would have been more appropriate.

Well seeing how a year usually has north of 250 workdays, I don't think adding an extra four will not increase productivity by any significant amount. Likely, the hit to public morale will turn this into a net negative instead.

It's a shame that competition issues such as holidays and regulation have taken a back seat to general health and welfare cuts in the Euro crisis. Germany should be getting countries to cut these kinds of luxury items instead of the services that end up getting voters out throwing rocks on the streets. This is low hanging fruit and its baffling why it has not been the first to go.

Do the English still celebrate St. Crispin's Day, since Shakespeare says that forces under Henry V kicked the holy crap out of the French at Agincourt in 1415?

The linked chart and article suffers from many approximations - i really don't think it's a good basis for any sort of conclusion. Especially not of the type "asians work harder" and "latins are lazy".

Here are a few that I've noted:
- Portugal, while cited in the blurb, does not appear on the chart.
- The French number reflects the number of mandatory vacation days (in french, "congés payés", or paid holidays) anyone with a full time employment contract gets. 25 days corresponds to 5 weeks. It does NOT reflect the - additional - number of "public / religious" holidays, which are the subject of the freakonomics article. (a quick count gives 5 extra non-religious holidays, 5 extra religious holidays) If these fall on a week-end, tough luck ... you don't get them back - but you get them in the public AS well as the private sector.
- Again, for France, the numbers of "extra holidays" if you work in the public sector is highly variable. And even in the private sector, entire branches get one or two weeks extra (banks are a well known example)
- As somebody above noted, work weeks vary by country (and by sector) from 4 to 6,5 days.

The chart itself is bad, but that's to be expected of The Economist - it's twisted to correspond to their editorial stance.
What rile's me is the Freakonomics endorsement. There is a true debate on wether cutting holidays is economically sensible policy - this post is clearly not it.

I am very surprised that the Vatican allowed these cuts. How can the government have control over religious holidays. Could there have been money involved in the negotiation?