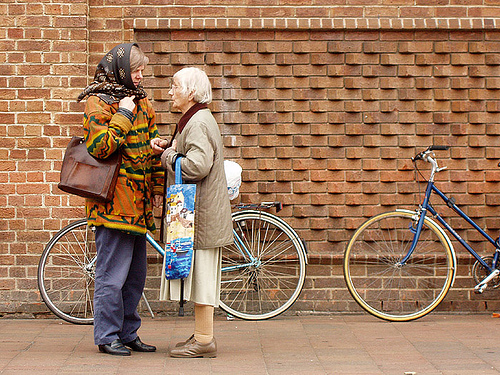 Last week’s podcast, “Everybody Gossips (and That’s a Good Thing),” was all about the functions of gossip — good and bad. A new study (abstract; PDF) by Matthew Feinberg, Robb Willer, and Michael Schultz looks at how gossip influences group cooperation. The researchers played a game with 216 participants, with groups investing in public goods. Participants were allowed to gossip in between rounds and exclude a participant from future rounds, if they chose. They found, as Nicholas DiFonzo said on our podcast, that gossip is great for policing and reforming selfish free riders. From The Telegraph:

“And groups do even better if they can gossip and ostracize untrustworthy members.”

…Doctor Robb Willer, co-author and associate professor of sociology at Stanford, said: “By removing defectors, more co-operative individuals can more freely invest in the public good without fear of exploitation.”

When people deemed selfish suffer social exclusion they often learn from the experience and reform their behaviour by co-operating more in future group settings, the team found.

It seems that power to act on the information (ostracize, ally with more co-operative people) is critical. It would be interesting to see whether there is a benefit or negative effect when those who gossip are powerless to change with whom they must work.

Perhaps the way you do this is by measuring gossip by employees about their boss. You can socially ostracize your co-worker (Betty and Daisy gossip about and shun Mary) but you can't do that to your boss.

you know how it goes- "time is money." No time to waste with this outfit.

"Groups that allow their members to gossip sustain co-operation and deter selfishness."

That's OK if that's what a group is trying to propagate -- cooperation and selflessness. Those are not universally sought attributes in capitalist workplaces, however. Betty and Daisy may gossip about and shun Mary for her perceived selfishness because Mary seems more intent on winning the promotion that all three of them covet, and more willing to work long hours and make sacrifices to get it. Here, the gossip would only be sapping team time and energy.

So gossip may be good at shunning your neighbor who doesn't use the curbside recycle bin; but its applications are not universally positive.

Perhaps you need a dictionary? The sort of information exchange studied here doesn't at all fit the definition of gossip as I, and a few Googled dictionaries, understand it. E.g. "casual or unconstrained conversation or reports about other people, typically involving details that are not confirmed as being true.", or "Rumor or talk of a personal, sensational, or intimate nature."

I'd say this concept implies a set of questions related to the well-known economic prosperity of big cities as compared to smaller cities and towns. After all, as James notes, one characteristic of gossip or gossip-like discussion is that it is very unconstrained, "typically involving details that are not confirmed as being true".

That is, the sort of chitchat under discussion often entails oppressive and wholly arbitrary constraints on a wide range of behavior besides freeloading. Frequently it comes down to xenophobically and coercively imposing quasi-tribal behavioral markers pulled at random out of thin air. Truth, due process, and even elementary fairness may well be disregarded utterly.

The set of questions:

Apparently, vastly improved and rapid communication (via the Intertubes) has pretty much failed to level the economic playing field between big cities and smaller places, contrary to what many of the technology pioneers might naïvely have expected.

Are gossipy oppression and nastiness in smaller places adding to network effects in helping to drive out economically productive "creative" types - who might well display "wrong" behaviors with respect to sports, choice of beer, or whatever the faddish tribal markers of the hour might be - and move them on the relative anonymity and greater latitude available in bigger cities? Does that help keep the playing field as tilted as ever? Free lunches are rare; does the (partial) suppression of a bit of freeloading carry a cost? Amidst the prosperity of at least the developed world, is it worth that cost? If so, when? (Maybe Matthew Kahn of UCLA could weigh in?)

Great, we now have a study that serves as an excuse to mercilessly hunt down introverts and eradicate them from the workplace. That'll definitely help. At least the braggards and showmen in the work place. Of course, introverts have to "reform their behavior", because claiming to be an introvert is really just an excuse to be a selfish free-rider.

Sorry, this is simply nauseating. The word "introvert" does not occur ONCE in the entire study, suggesting that the authors paid little heed to personality profiles. In fact, the word "personality" only occurs in the references. Quite the contrary, the very study setup is already biased towards equating non-social behavior with group-damaging behavior. The fact that Stanford would produce such a biased, ill-controlled pile of propaganda is staggering.

Hey Oliver, you could look at the implications from a different angle. Instead of hugging to the idea that conforming or adjusting to a certain type of behavior is bad, what if the gossip was actually adjusting the poor behavior of others?

But of course, what if the tables turn? What if the majority is displaying poor behavior and the minority aren't?

Patients in the U.S. healthcare system often feel they’re treated with a lack of empathy. Doctors and nurses have tragically high levels of burnout....