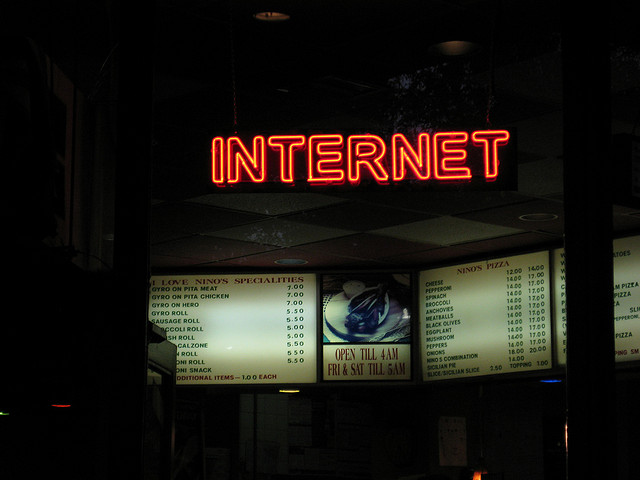 Our latest podcast is called “Who Runs the Internet?” (You can subscribe to the podcast at iTunes, get the RSS feed, or listen via the media player above. You can also read the transcript; it includes credits for the music you’ll hear in the episode.)

It begins with Stephen Dubner and Steve Levitt talking about whether virtual mayhem — from online ranting to videogame violence — may help reduce mayhem in the real world. There is no solid data on this, Levitt says, but he hypothesizes:

This episode then moves on to a bigger question about the Internet itself: who runs it? As Dubner asks: “Who’s in charge of the gazillions of conversations and transactions and character assassinations that happen online every day?”

Internet scholar Clay Shirky, author of Here Comes Everybody: The Power of Organizing Without Organizations

, tells us that 60 percent of adults around the world are now connected to the same communications grid. (South Korea, he says, is the “most wired” country.) And this global connectivity is interesting, he says, because it’s not like there is an international body governing what’s online:

SHIRKY: Well, I mean, famously, the regulatory overhead on the Internet is permissive and minimal. In fact, the thing that freaked everyone out about it in the 90s when it was spreading on the wings of the web was that no one was in charge. … There are famous stories of bosses fretting that because all of their employees were suddenly sending international emails that they were suddenly going to be hit by the bill by the people who ran the Internet.

This week’s episode also serves as a prelude to next week’s, which discusses who’s in charge of — well, the whole world.

Just listened to the podcast. One thing that I notice about the Internet is that a person can have any kind of extreme beliefs - and find others who have the same belief. If others have my belief, then obviously it is not extreme, it's the natural norm. I don't need to look any further.

(Sure there are enemies of my Obviously True belief, but they have their own agendae).

I agree - that's the core of what makes social networking so special. Sabermetrics is a good example - when SABR was first founded, it was comprised of 50 individuals, all dedicated to researching baseball stats. The group today has thousands, united largely because of the internet and its ability to spread information.

This is a new topic?

All it is, is the freemarket expanded to the cyber world. And it's great. It vindicates free market attitudes from Adam Smith to Milton Friedman to Friedrich Hayek.

The author/social linguist/musician Jarron Lanier (http://www.nytimes.com/2013/05/06/books/who-owns-the-future-by-jaron-lanier.html) has an alternative view about the liberating, free market concept that many people associate with the internet. Nothing on the internet is actually free, the data you transmit and receive is subtly paid for by allowing others to have your own viewership "data".

This is only tangentially related to this podcast episode, but since you brought up the distinction between radio and podcasts... Why do you reset in the middle of the podcast, telling the audience the subject, interviewee, etc? Who starts a podcast in the middle?

Dubner's point on ranting sounds like he subscribes to "Sticks and stones may break my bones/But words will never hurt me". Verbal insults are still painful to the target, no matter what little children yell when their feelings get hurt by insults.

Furthermore, expressing an opinion is self-reinforcing. When you tell people, "SuperFreakonomics is the best book published this decade", you don't "get it out of your system" and stop thinking that or behaving like that because you had an outlet. You actually become more committed to this view because you expressed this opinion.

Violent video games (or violent television programs) don't stop murders because people deal with their murderous impulses by seeing things blow up on a screen. This effect largely works because someone who is sitting by himself in front of a screen does not have any live targets to hurt.

I was thinking something similar as I listened to the podcast last night. The "get all your nastiness out online so you don't have to let it out in person" argument assumes, as a dismal scientist would, that an individual possesses a finite amount of "nastiness." This isn't the case at all. The more nastiness one exhibits, the more nastiness one creates in one's self. Behaving in such a manner online, on the phone, or behind the wheel develops a habit and makes an individual more likely to engage similarly in person.

"an individual possesses a finite amount of “nastiness".
True, under certain circumstances, a person's mind can potentially be in "hate mode" indefinitely. Available time and energy to act on this "nastiness" state of mind though, are finite and pretty limited.
As Levitt says: "They’ll stop watching TV, they’ll stop doing homework, and they’ll stop going out and creating mayhem on the street. "
Internet&videogame addiction could sedate the drive to go out and actually hurt someone in flesh.

Not sure I agree with the cathartic effects of playing online video games. Keeping youth off the streets, sure. Replacing real violent behavior with virtual, probably not.

I agree with you. Remember the Japanese workplaces that kept an effigy of the boss in the basement that you were welcome to go and punch if you felt frustrated? I think the sort of energy that derives from frustration, especially adolescent male frustration, is far more physical than simply pressing buttons on a handset. (erm I've never played a videogame in my life so possibly I'm missing something)

Wait, are you really saying that there is no way to check whether what someone says on the internet is true?

I have a way: It's called the INTERNET.

If someone lets words from random people on the internet hurt them then they have other problems to attend to that have little to do with the internet itself.

"Much of what you read on the Internet is not true." Abraham Lincoln.

The topic of ranting brings two interesting issues to mind for me - anonymity and accountability.

I think one reason people tend to rant is simply because they feel they are able to without any real repercussion and because they can ultimately shield themselves from any backlash. This could foster some sort of desire to continue to rant on different topics. Think about the Twitter/LeBron issue after he left Cleveland. People were tweeting unbelievably harsh things at LeBron. Very few of those people would have done so to his face, but it was easy behind a keyboard. Recall that LeBron retweeted a few of those comments, and the accounts behind them were immediately deleted. I'm sure those same people tweeted harsh things at others, too. There was zero accountability for those statements, and no one could know the real author. Once exposed, those individuals changed their behavior. To a lesser extent, the same thing carries over to why people can be such idiot drivers. Feel free to drive selfishly and cut someone off in traffic because your interaction with them is almost immediately ended. No one cuts lines so brazenly at an amusement park or bank.

Ultimately, it seems like the ability to anonymously rant without repercussion on the internet fosters more ranting.

The description of the internet self organization does sound familiar. My wife and I love to watch Ted Talks while eating dinner. Last night we watched "Deborah Gordon: The emergent genius of ant colonies". It seems very relevant to the question of who runs the internet. The better question might be "What mechanics do we employ to all run the internet together?"

As a chemical engineer, this makes me think of feedback/feedforward controls. In chemical plants. A feedforward control requires a very good model of the system in order to effectively control it. It is not optimal for a complex, unknown system like the dawn of the internet. A feedback control is responsive and will always be able to adjust the system albeit after the shock in the system has created an undesirable response.

This video appeared in my feed, and I remembered Steve's opinion about violent gaming
lol
http://www.youtube.com/watch?v=Knab9oQIMOQ

I don't take any comfort in Steve's comment about kids not doing their homework and being less likely to go out to commit violent acts if they spend hours playing video games -- violent or otherwise.
Why did the homework part get ignored? It basically indicted video games for the dumbing down of America.
As for the violence part, couldn't a kid get pumped up on virtual mayhem and then, being desensitized, go out and commit a violent act in a extremely short period of time?
I recently saw a report about an alarming trend of teens performing "knockouts," whereby they pick a random individual and punch them as hard as possible with the goal of making that person lose consciousness. Then they and their friends laugh about it, and in an interview they dismiss it as fun.

I think y'all are way off base with an offhanded comment about nastiness on the internet. Women and minorities take a huge hit. While it may seem easy to brush of harsh language, when your social media is inundated with rape threats, comments about your looks, comments about your personal information it is immensely frightening. The police cannot take action on social media threat.

This is not an occasional thing. Women outspoken in comics, gaming, or social justice often face these threats every time they go online. Even a person just mentioning they are gay or a woman in the wrong "neighborhood" of reddit will really get harassed. That all has a real life cost. Not, to the harasser, but to the harassed.

Why do we need someone to be in charge of everything ? It's a free space where you can fin people to talk to you that have the same beliefs or totally different ones. It's the place where you find people that support you and people that criticize you. It's a technology projection of the world.