Yesterday I noted that there is powerful evidence from the recent Gallup World Poll that rich countries are happier than poor countries. Today, I want to show you how this fact remained hidden in the data for several decades. (And I don’t mean to suggest that we are the first to discover this, but rather that those who noted this were somewhat outside the mainstream.)

In our recent paper, Betsey Stevenson and I went back and re-analyzed all of the early international surveys of happiness, and we now have data from 1946 to 2006.

The figure below shows the results from five early international comparisons of happiness and G.D.P. 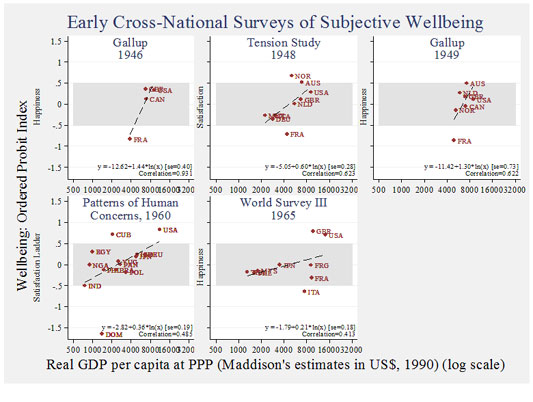 The G.D.P. data on the x-axis are self-explanatory. The happiness data on the y-axis are also easy to understand — although the units we use for analyzing them may be less so.

The difficulty we face is that some surveys ask about well-being on a 0 to 10 scale, some ask if you are “very happy, fairly happy, or not very happy”, and others ask about happiness on a 4, 5, and sometimes even 7-point scale.

These differences make it difficult to make comparisons across surveys. We estimate average happiness scores by country by running an ordered probit regression of happiness on country fixed effects, and this is what you see plotted above.

Yes, there is too much jargon in that sentence, so let me try to give an intuitive explanation:

Essentially, this technique assigns each person a happiness “z-score,” by taking their response, dividing it by the standard deviation, and subtracting the mean. We also need to sort out the extent to which “very happy” differs from “fairly happy” or “not very happy,” and the ordered probit does this by analyzing the proportion of the population giving each response.

If, say, only a tiny fraction of people ever respond that they are “not very happy”, then we could infer that this is a pretty bad state to be in. All told, the coefficients can be interpreted as average levels of happiness, measured in units that correspond to the pooled within-country standard deviation of happiness.

If this seems overly complex, the main point is that we try to make these estimates comparable.

To the eye, this figure seems not to show much of a relationship between income and happiness, and early observers simply noted that most of the data was inside the shaded band. But looking more closely, in three of the five cases we get statistically significant effects, and in no case can we reject the hypothesis that the happiness-G.D.P. gradient is 0.3. This is pretty important, as we shall see below.

Next we show the data from succeeding waves of the World Values Survey, which began in the early 1980’s.

While there is still some doubt about the link between well-being and G.D.P., in the early 1980’s (as more data accumulated) it became increasingly clear that there is a close link between the two. Indeed, by the latest wave of the survey, we see a wellbeing-income gradient of 0.35, and a correlation of 0.7. 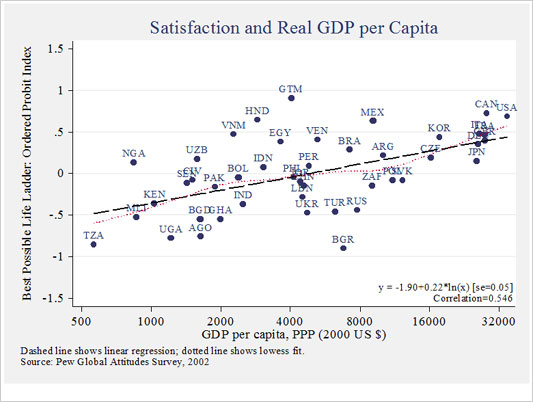 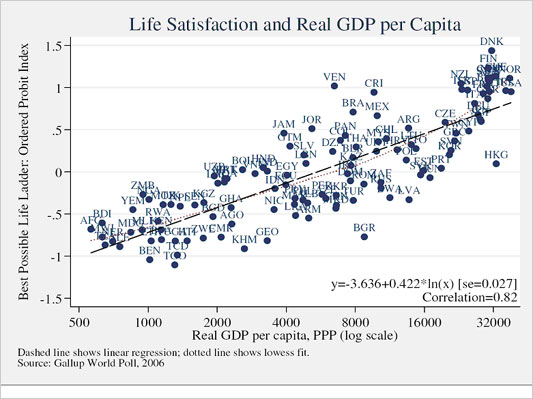 Yes, this is the same graph I showed yesterday, but this time I’ve put the y-axis in comparable units to the other surveys. And the wellbeing-income gradient is about 0.4.

The key point is that across all of these surveys, the estimated wellbeing-income gradient is around 0.2 to 0.4. Moreover, this holds across each of the many datasets that have accumulated over the past sixty years. In the early years, this relationship was not always statistically significant, but this did not mean that there was no such relationship.

Three more observations about what we can learn from this history:

1) The income-well-being relationship has appeared just about as strongly in surveys probing happiness as in surveys asking about life satisfaction. (There are exceptions.)

2) One interpretation of the 2006 Gallup data is that it is still all about relative income comparisons: In today’s global village, folks in Jamaica may be comparing their lot in life to the greater prosperity they observe when watching U.S. television shows. Countering this, it looks, to my eye, as though the income-happiness link appears about as strong in countries that are truly plugged in to the global village, as those that are less engaged.

3) Moreover, the relationship between income and happiness is about as strong today as it was in the very first surveys, which were taken sixty years ago, when the world was less integrated.

This is incredibly fascinating. I am looking forward to the next one tomorrow! Thanks for spending so much time preparing this analysis for the blog and making it so understandable... it's exactly what I come here for.

Is it possible that the gradient you are trying to estimate is not a constant but an increasing function of the cummulative impact of mass marketing past and future with its basic message that the good life depends on increased consumption of goods and services - all of which increases a person's need for more income. If this is the case, then it would be reasonable to expect an increasing gradient as we go forward.

This is good work! This is what I love to see from the Freakonomics team.

What I think would add to this analysis is to determine what differentiates the happiness level at the high end, among those with similar GDP per capita. Why is Denmark happier than Italy or the US? Small size? Homogeneity? Culture? The most common critique of the argument you are making is to highlight these differences and to claim that government programs make the difference. Sorting them out and their significance would really bolster your argument, an argument I believe is squarely on the mark.

As a kid I grew up in a low-income one-parent household and went to high school during the stagflation of the late 1970's. As I grew older and my income increased and I certainly became happier. Today I save a lot of money because of my poor upbringing, and I live modestly compared to my means because I am satisfied with less. Having money in the bank makes me feel secure, which is a big thing with me, and that makes me really happy. All of this correlated with America's increasing GDP. Let's keep it going so I can die with a huge smile on my face.

enough with this diabolical 'facts' stuff!

the rich lottery winner is exactly as happy as the much-poorer disabled person. what about synthetic happiness?

somebody's twisting something, or just doing poor analysis, or fudging results, or comparing apples and oranges.

whether it's harvard dude or freaks or the statistics gods - something is going on, here.

Saying that the gradient is 0.3 is not very informative if we don't know the denominator. Is it a 0.3 change in the happiness z-score for every $1,000 in GDP/capita? That would appear to be a substantially important effect. On the other hand, a 0.3 change for a $10,000 change in GDP/capita would be much less significant.

In addition, I have to comment that the gradient shown in the graphs is very deceptive because the scale of the X-axis is not linear. For example, look at Mexico and the US in the next-to-last graph: they have about the same level of 'satisfaction', which seems OK because they appear very close in the x-scale. However, Mexico's GDP per capita is 4 TIMES lower than that of the US. If the x-axis scale were linear, I am sure all these lines would appear a lot flatter than they currently look, and I am pretty sure that the next-to-last graph would look just like random noise.

Peter's link points us to a talk by Dan Gilbert which causes him to wonder whether people are comparing apples and oranges.

In Gilbert's book, 'Stumbling on happiness', he suggests that if you want to know how you might feel in alternative futures, you are likely to make big mistakes if you try to imagine how you might feel. He suggests that it is better to ask other people who are currenty in similar situations how they feel. So that seems to me to suggest that the best way to find out whether it would be better to be rich or poor is to ask rich and poor people how happy they are or how satisfied they are with their lives. That is exactly what the surveys do.

Some of us might like to imagine that we could adapt to anything, but from what people on low and high incomes tell us in these surveys it seems like a good idea to accept that higher incomes are generally more conducive to happiness. (Alternatively, we could just take Sophie Tucker's word for it. She famously said that she had been both poor and rich and found that rich was better.)

What's this happiness everyone seems to be talking about everywhere? What does everyone exactly mean when they refer to happiness? Is it wealth, possessions, degrees, power, family and friends, looks, you name it. Including health, perhaps?
We may all have these things and being surrounded by millions of people and still be unhappy?
Where has happiness gone then? Do I need them for my happiness after all?

Do we not realise this? Are we, human BEINGS (not human HAVINGs or DOINGs), aware that happiness DOES not lie on the external, visible things and people?

People all over the world (In the West as well as in the East!)talk of happiness as something tangible, something outside of ourselves. Is it really? Or is it something more than what the senses can preceive?

I can only be happy if I DO NOT depend on them, cling on them emotionally. I DO love people and things if and when I am NOT attached to any of them.

So what? Good econometrics for what? It's a good answer for a bad question, maybe after reading this you'll get my gist http://www.amazon.com/Perpetual-Euphoria-Duty-Be-Happy/dp/0691143730

The main issue is plotting happiness versus log of income. If you simply plot it on a linear scale you see that at the poor end of income, happiness increases rapidly with income, but after about $15,ooo per year (country average, 2005 $), it levels off. Yes there is still a positive correlation at the high end, but it takes enormous increases in income to have even a small increase in happiness. Plus about half of the variation in happiness values is not explained by income.

Because large increases in income for rich countries translates to large consumption of resources and generation of pollution, policies ought to downplay growth and emphasize the other factors at play.