N.F.L. training camps are underway, and there has been even a bit more than the typical early-summer disgruntlement — from, among others, Brett Favre, Devin Hester, and Jeremy Shockey.

But the far bigger story, and the far larger dose of disgruntlement, has come from Pittsburgh. The five grown sons of Steelers founder Art Rooney are fighting over their ownership rights. If you are a Steelers fan (as I am), this is potentially really bad news; the Rooneys have been extraordinary stewards of both their team and the N.F.L.

The Steelers never won a Super Bowl when Art Rooney, known as the Chief, was the team’s president. So maybe he wasn’t the best football executive in the world — but, unfortunately, he was a pretty good forecaster. In a new book called Ruanaidh ( “Rooney” in Gaelic), Art Rooney Jr. writes a rollicking family memoir with a million great anecdotes. But the most sobering thing in the book is a letter from Art Rooney Sr., reprinted on the very last page, that urged his five sons to find a way to avoid ownership squabbles: 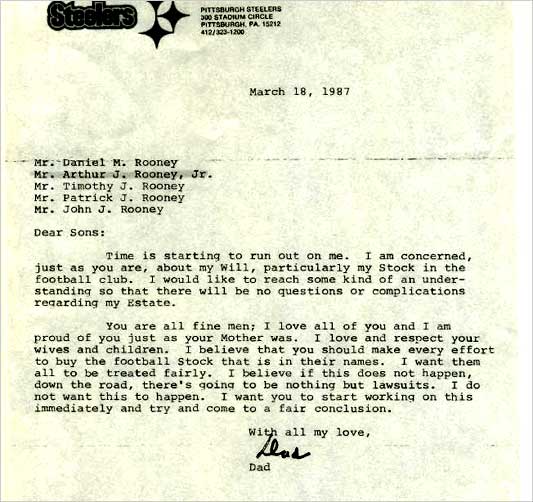 King Leer of football. An excellent movie will be made about this one day.

The issues are indeed estate tax, gambling ownership, and the 30% rule. It is quite complex and has been a family issue since at least 2000. The NFL requires that at least one owner in an ownership group to own 30% of the club. The most recent report I heard had two of the sons who each run one of the two tracks passing their 16% shares in the team to their children. This should take care of the NFL gambling requirement and help with the estate tax rules for those two brothers. There is still the 30% stake NFL rule and then the estate tax issue for the other three brothers. Shame that Dan could not buy one of the other brother's shares and then they put the rest up for public stock sale. NFL will never allow it but I sure would like to own one share of one of the top franchises in all of sports.

Great letter - thanks for uploading it!

Stephen, wow. great story and great letter. Does this story tell us something about the estate tax laws in this country or about the difficulties in dealing with money and silings?

I'm surprised they don't try to sell stock in the team to the public in pittsburgh in a similar way they did to the packers. Anyone who buys them shouldn't dare move them from a business perspective, they have far more value as the steelers in pittsburgh than they ever would no matter where they would be to transferred (even if they keep the name). That being said, i'm sure that doesn't rule out the possibilty 25 years down the road.

Hope that the steelers orginazation falls apart. No way is the Steelers going to the superbowl. All hail to America's team, Dallas Cowboys all the way.

I agree, Pittsburgh would be a great place for a publicly-owned team. The Steeler Nation, all over the country, and epecially here in Pittsburgh, would be so proud to have a piece of the action and would probably love to keep Dan Rooney in as President.

Pete's post, if true, is intriguing- thus the NFL will steal public funds for their stadiums but refuse any public ownership of teams- so much for a free market, unless it's meant literally...

ps- love the Steelers, and a touching letter to read- Steelers-Saints bowl this year- u heard it here first

The Rooney's are a pivotal part of the Steeler's franchise. It will be a sad, sad day when this changes.

Rooney and Steelers were practically my first 2 words! I don't want this tradition to change.

#2 and #8: The NFL currently forbids any other teams from emulating the Packers' community ownership (that team's arrangement is grandfathered in). It would be nice to have - the same thing is talked of occasionally in Buffalo, where the founder and owner is in his late 80's - but convincing the league to allow it is a tough nut to crack.

Might be worth noting that the cause of the squabbling is not bratitude over the direction of the team, but rather the estate tax: four brothers cannot afford the tax on their share (45% of 200m), the fifth brother cannot afford to buy them out (800m). The fighting is over the exact valuation of the shares. Not a Steelers fan, but it will be a sad day when the Rooney's lose them.

From my amateur understanding of the Pittsburgh market I would say that the Rooney's (and Pittsburgh) are lucky that the Steelers have such a widespread fan base because the local economy/population couldn't support an NFL team on its own. They may want to consider this before bickering for too long as eventually a white horse may come into the picture.

Actually, it was my understanding that the cause of the squabbling has more to do with the fact that the Rooney family also has stakes in gambling-related businesses such as dog racing, etc.

The NFL forbids team owners from having such ties; the Rooneys would have to choose either the team or the racetracks. Four brothers chose racetracks, the fifth chose the team. But the fifth brother doesn't have the money to buy out his brothers' ownership stakes in the Steelers at fair market value and has been unable to convince them to cut him a deal.

But as a Steeler fan, I think it would be very sad if the team's control fell into outsider hands. I have no logical reason for believing that ownership of the Steelers must stay in the hands of a Rooney, or that disastrous thing will happen if an outsider comes in, but the Rooneys have been one of the classiest, most ethical and respected team owners in the league. Why mess with a good thing?

Is there no tax adviser/expert out there (among the Steeler fan base, or among the pure football fan base) who can help the brothers design a plan to achieve their great and wonderful father's wishes? What have the brothers been doing for the last 21 years since he asked them to start working on this "immediately". Let's hope Art Rooney's legacy and the team will survive intact.

Re #6: You are correct. The issue is not estate tax (although that would be a problem at some point down the line). The issue is a divergence of interests in light of NFL ownership rules (ownership in a gambling operation).

It would stand to reason that the NFL, who have quietly ignored this breach of rules until recently, would step in and ask for a written contract that specifically forbids any of the Rooney brothers who are active in the ownership of gambling interests to be active in the Steeler organization. I think the NFL's issue is an association between gambling and the league. It is clear in the Steelers situation that until now (and likely to continue in the future) there have been absolutely no links between the Steelers organization and the business of gambling.

Roger Goodell should step forward and facilitate some kind of "chinese-wall" arrangement that would protect Rooney family ownership, and the league's interests. The NFL, much less the Steelers, will be a very different league without Rooney influence.

As a lifelong Steeler fan, I really hope that this story has a happy ending.

Do the steelers ever give away tickets (for say a church picnic )to use as a fund raiser?