Every year, for no good reason, I publicly post my Kentucky Derby predictions. It was all well and good until last year, when I confidently stated that the worst horse was one named Mine That Bird. 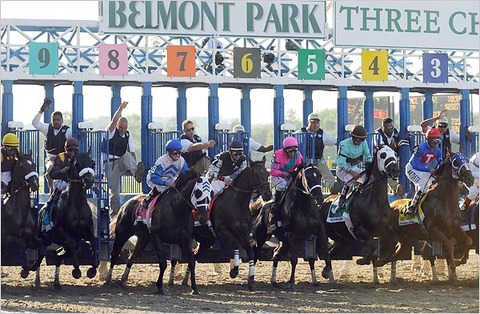 Barton Silverman/The New York Times Mine That Bird (7) at the 2009 Belmont Stakes.

Unfortunately, Mine That Bird went on to win the race, and even finished second in the Preakness for good measure. You might think that, combined with the fact that not one single person has asked who I like in the Kentucky Derby this year, would be enough to keep my predictions to myself.

Well, no such luck. Here they are.

My top pick this year is Discreetly Mine, a long shot who should go off at nearly 30-1. There are four other horses I like slightly less than that first one: Jackson Bend, Mission Impazible, Ice Box, and Awesome Act. All of those should have odds of about 15-1 to 20-1 at race time.

There is only one horse that I think as ill of as I did with Mine That Bird last year: HomeBoyKris. I would guess fair odds on that horse should be at least 300-1.

If HomeBoyKris wins, I am going to find a new hobby. Maybe needlepointing unless blog readers have a better suggestion.

I like your picks Mr. Levitt. My wife always plays long shots on Derby Day and saves the day by covering my loses. Your picks make good freakonomic sense.

Watch Out for the Son of Smarty Jones - Back Talk and

the Son of Afleet Alex & Grandson of Affirmed - Dublin.

these & the remaining for third Leg for the Trifecta and

both Sidney's Candy, Lookin at Lucky, Super Saver in Leg 3

& the Remaining Horses for the Superfecta !!!

If you're looking for a new hobby, card counting is your best bet. You'd guarantee yourself a gambling edge for once. I'd start at the Majestic Star in Gary, Indiana.

BEST RACE EVER CONGRATULATIONS TO THE OWNERS, TRAINER AND JOCKEY WHO HAS PUT THE REST OF THE BIG SHOTS IN THE SHADE GOES TO SHOW A SIMPLE HARD WORKING PERSON THAT DOES HIS HOMEWORK AND PUTS IT TO THE TEST PAYS OFF IN A VERY LARGE WAY. KENTUCKY DERBY THEN THE PREAKNESS BRINGS OUT A SUPER WINNER NOW OFF WE GO FOR OUR FINAL TEST: BELMONT STAKES. LETS SHOW THEM ALL THAT PRAYER IS A POWERFUL TOOL WHEN YOU USR YOUR HEART AND SOUL FOR THE CORRECT ANSWER. MINE HAS ALREADY BEGUN.