Here's One Place Where Drunk Walking Is Discouraged

I have attached a photo you might find interesting regarding the dangers of drinking and walking. It comes as no surprise to a doctor that walking near roads when you are drunk very dangerous — I have certainly seen a large number of such incidents. It is also not a surprise to whoever it is that puts health warnings on local beer in deep rural South Africa. The carton is for Mqumboti, a traditional brew made with maize (it tastes dreadful by the way). The deep rural Transkei may be behind the rest of the world in many ways but they may have become wise to the dangers of drinking and walking before some more developed parts of the world. (The low car ownership, high levels of alcohol abuse, and total lack of any street lighting might have something to do with this.) 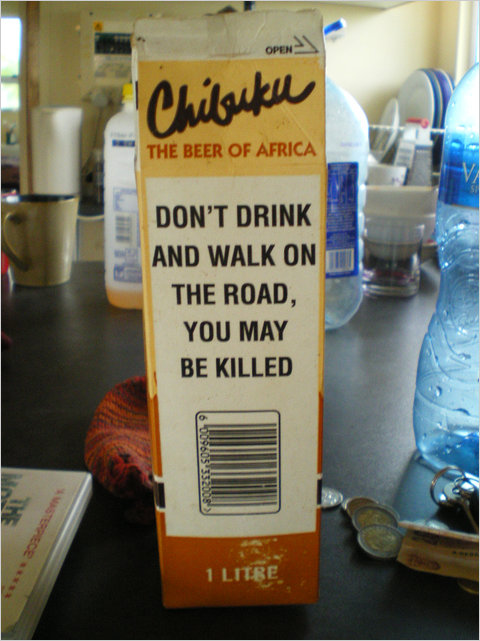 Wishing everyone in the States a happy and safe Independence Day weekend. And remember: friends don’t let friends walk drunk.

Don't walk on the road, you may be killed.

South Africa is right up there with road deaths per year - and pedestrians make up a large numer of the casualties. Anyone who lives in a rural area, and drives, will tell you horror stories of a figure staggering out in front of you while driving late at night, especially weekends.

"The deep rural Transkei may be behind the rest of the world in many ways but they may have become wise to the dangers of drinking and walking before some more developed parts of the world."

The mindset demonstrated in that post is all I need to know to dismiss this guy out of hand.

you also might die drinking beer from a milk carton.

The point is there is no place safe for people to walk that is not a road (shared with cars) - I suspect areas with sidewalks have far lower deaths due to "drunk walking" than areas without - your "drunk walking" analysis completely overlooks this variable - and it is the most likely explanation for why you see a high death rate per mile for drunk walking - it is because large areas of the US have no sidewalks - compare druink walking deaths in urban areas to rural and suburban areas - I know personally two who were killed by drivers because there was no sidewalk - is this too much to ask...

oh I get it - the reason why the authors have not looked into the drunk walking fatality rate in areas with and without sidewalks is because their libertairian ideoogy is inconsistent with an analysis with favors putting sidewalks in suburban areas, such that people can actually walk to a pub or market without driving - plus saying it drunk walking is dangerous is a great soundbite, hey it sells books!

Why can't they sell beer in milk cartons in the US? I want one!

Now people, this is South Africa where we look at life from a practical point of view. Several solutions to this problem are right there in the photo. First you can stay home and use the money to the right of the milk/bear carton to pay for the electricity at the "pay as you go" box on the far wall so you can watch the DVD to the left in the photo. Or if you feel adventurous you can use the car keys to the right in the photo to go run down another walking drunk.

Would be interesting to know how many drunk walkers were actually killed by drunk drivers. The social disapproval of drunk driving that exists in many parts of the world seems to be largely absent in South Africa.

If it's any comfort for the South Africans, the same thing happens in broad daylight in German cities. I don't know why German pedestrians think that cars can't/won't harm them, but they throw themselves in front of traffic with unnerving regularity. And if they actually do get hit, they blame the driver as though a car were a magical carpet that has the ability to avoid every collision that might happen. At least the S. Africans don't feel as much pain when they get hit, as they are already medicated with alcohol :)

I once spent a couple of years in South Africa as a foreign correspondent, and I can tell you that the danger of people wandering out in the street in front of your car there is greater than that of just the drunk walkers (although I can confirm there were plenty of them). A local once explained this phenomenon to me as being due to the fact that so many adults in South Africa do not own a car and do not drive, therefore their sense of how long it takes for a car to traverse a certain distance within a certain time frame is not as finely tuned as that of someone who drives regularly. I don't know if that is true. One morning in Soweto a sober young child ran in front of my moving car--I hit the breaks, and got out of the car not knowing if my reflexes had averted disaster or not. Fortunately, they had, and the child was lying there unharmed. On another occasion, I noted that a driver I knew who had hit a night walker (sobriety unknown) was himself a drunk driver. So the danger may be as much the drunk drivers as the drunk walkers. I also recall (and this was during the age of apartheid) an acquaintance accidentally hitting a (black) walker with his car, then refusing to take her to the hospital, because the apartheid-era hospital of the time (for whites only), would not treat her anyway. I insisted we take her to the hospital, and never thought of that driver the same way again.

It certainly is sad to see what has happened to South Africa. If only apartheid hadn't been so brutal to so many.
Independence has been terrible for a number of African nations especially those that had been ruled by the British.

@George. This is why the end of apartheid means to non whites. We not restricted by law to live in certain areas. We do not have inferior education forced on us. We have created thousands of subisidised homes for the underprivileged and still trying to do more. Considering our racial history there has a lot of tolerance and forgiveness from the black majority. Now as a privileged white in the apartheid era, this is what you lost. An instant loss of superiority based on race. This superiority with the backing of the law meant better jobs, better education, a cheap black labour force, which all meant that whites had an extremely privileged lifestyle. We are aware of crime and corruption presently in our land however this will be overcome with a solid constitution as a foundation

Imagine having drive along and take enough care so that you don't kill errant walkers? God! That would so add, like, minutes to my journey....

A pedestrian struck by a car going 40mph has a greater than 80% chance of dying. At 30mph, that falls to 40%. Lower speed limits, especially when they are enforced by automated speed enforcement cameras, save lives.

It's telling that you think "ending white rule" is a "liberal fantasy."

@12:
What has the end of white rule got to do with drunk walkers? Seems to me you are living in fantasy land yourself.

I think the beer there is non-carbonated & comes in that carton. Sidewalks may help, but people here in Ottawa have been killed crossing the road, or staggering into it. I think the speed of the cars plays a large part. The faster the cars go, the more serious the accident, and the less time the driver has to avoid it.