From our friend Mayur Misra in India comes an interesting photograph: 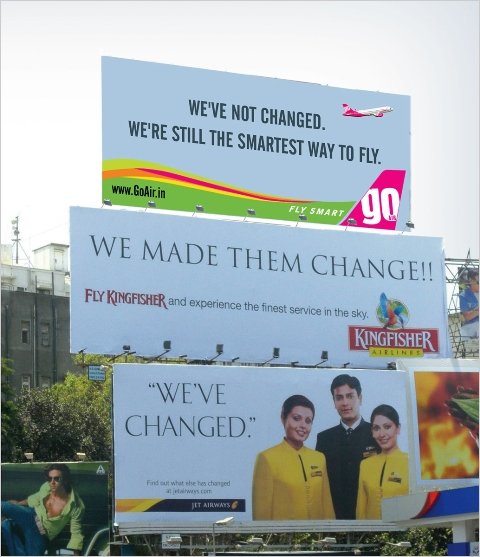 I don’t know if you have seen this one but the ad in the attachment is from 2007 of the ad wars between Jet Airways, Kingfisher Airlines and Go Airways in India. The background of the story is this: Jet Airways had changed the colors of its planes and the uniform and its airplanes then. Kingfisher Airlines is its biggest competitor and put the other ad 1-2 days later above the Jet ad. Now here is the smartest one, Go Air put the ad above both the airlines ads. See the series of ads in that context, it’s very funny.

This is not the first time we’ve seen such call-and-response advertising from India. I am guessing this practice exists in the U.S., especially on the local-advertising front, but it is probably rarer.

In an upcoming podcast, we tell the story of an advertising campaign whose message was blunted when the celebrity who appears in the ads was forced to advertise for a rival company (as he is the member of a professional sports team that made a deal with the rival). Remember Michael Jordan and the famous Nike/Reebok Olympic conflict?

Am I the only one who notices the obvious photoshop job of the top ad?

Not to mention, why are Indian ads written in English?

This reminds me of Obama's sequence of "time for change", "change takes time", and now the reality of "no change this time".

Of course, the problem with this sort of advertising is that the original often comes out looking the best. In this case, I get the feeling that Kingfisher is a little nuts (and maybe holding a grudge) especially with the hideous extra exclamation mark. And I get the feeling that Jet is trying to clean up a bad reputation that they probably earned for a reason. By contrast the Go ad seems relatively professional, if a little sterile.

Ironically Obstructing Billboards are an insult to vistas, a blight of cities and a turnoff to tourists, EVERYWHERE except in Indian Megacities. A bright billboard with smiley faces does a lot to cover up a ghetto, hovel or slum.

Too bad it just papers over the true problems. Maybe they should also use olfactory advertising to cover up the stench.

@Robbie, what language would you have them be in? India has hundreds you can choose from. That's why English (one of the national languages) is often used as a lingua franca.

@Robbie Laney: don't see the necessity for Photoshop here ... just a simple picture of 3 billboards, one on top of the other. As for why ads in India are written in English, what other language would you expect? There are, at least, a dozen unique languages and hundreds of dialects. English just happens to be the common denominator.

Agree with Robbie, actually to me it seems as both ads #1 and #3 were superimposed on the picture, and only #2 was there for real.

These are phony photoshop images.
You can just as easily place a centerfold there.
Move on nothing to see here.

I agree, the top billboard looks extremely fake. Notice the odd pixelation of the GoAir address in the bottom left? That's what text does when you distort the perspective of a flat image in photoshop at too low of a resolution.

It might have been a real billboard down the road, but I would bet it wasn't actually above these two.

This is quite a popular forward e-mail in India, however definetely looks like gone under the knife. :) An abridged version adds the image of (infamous) Indian railways minister.
Back to the topic of counter advertising, Pepsi and Coke follow the cat and mouse game with Indian cricket team. For example: World cup is sponsered by either one of them and other one then sponsers the individual team players and start; leading to continuing cycle of cornering stars in the lean time and leaving them near big tournaments. Just wondering if this increases the pay checks of team players.

English is commonly spoken in India and most upwardly mobile middle class Indians speak English as well as their Western counterparts. Also - a brand looking to cater to the middle class would rather use English than Hindi or other regional languages, as Indian English is the language of the classes, not masses.

As for the ad - mildly clever, about 2 years old and definitely photoshopped!

After a quick glance at the topmost sign I noticed something peculiar; It was floating in the air. A more cleaver photoshoper would have placed the topmost sign slightly lower so that the lack of supports would be hidden behind the middle sign.

When it comes to obtaining costumers from their competition, companies are willing to do just anything. In this case, Kingfisher and Go Air have tried to do it with advertisement. They have used this powerful source to place themselves above their competitors; Kingfisher above Jet Airways and Go Air above the rest. In seeking costumers, companies try doing it by showing that they are the most trustworthy and the best among all other options. They have chosen to use advertising because it's very powerful, especially when it's so catchy as this. The companies doing this are probably pretty sure that the costs of creating the ads will be outweighed by the benefits from it, which they hope will come from new costumers. They realize it's important to win over people by establishing a sense of confidence in them and winning their loyalty, because once they've chosen your company it's not very likely they'll switch to another one. This is because people are most comfortable doing what they have already done and with whichever company they have already done it.

This sequence of ads is very smart. Go Air is trying to say that it has yet maintained its high quality airline. The one I like the most, is KingFisher Airlines. It's the first advertisement I look at. Moreover, it gives an idea of power, since they made Jet Airways change. I would have never guessed that these ads had to do with the fact that Jet Airways changed their color, planes and uniforms. I thought it was an ad referring to quality. I would like to know how the customers responded to this billboard, and what were its results to the airlines.

I think that putting advertisements on top of one another is not too smart. What I mean is, wouldn't it be smarter to let 2 companies post their ads on some place, and then the other company posts their ad on a separate place. That way they can gather attention from that place only to themselves, while the other 2 ads are splitting the attention, depending on where they are posted.

I personally find these ads to be humorous but also believe that they catch the essence of competition. While both ads are showing how much their airplane companies have changed, the last one says ?we?ve not changed?. Thus one can imply that while the first two companies changed for the best the latter believes in consistency and remaining ?great?. Also, it shows how competitive these companies are as they all responded to one another in the same space challenging one another. I believe that this is a positive aspect to India, as it prevents a monopoly to take place and further fuels the economy by encouraging tourism as it facilitates these potential tourists to reaching the nation in a comfortable manner.

Now that we've all agreed that the ad is photoshopped, can we move over to how extremely ignorant #1 Robbie Laney is about the usage of English in India? According to Wikipedia, India is second to the USA in the number of English speakers worldwide (http://bit.ly/aYqcmO). Considering that this census data is around ten years old, I wouldn't be too surprised to see India in first position were a survey to be held this year.
We aren't a land of snake charmers Mr. Laney. Maybe the Drill-Baby-Drill Drill Team can drill that into your head.

This is hilarious, I find it hard to believe that these companies would approach such fierce competition. It probably is not good for their revenue, yes of course it is a laugh for a while, but smart people would not see these companies as truthful nor serious; at least I would not see them like this. If they are so fierce to put up billboards with direct messages to win customers, who says they don't cut up on airplane checks or security issues just to lower the prices and beat their competition. We ought to think to various levels what one small action may mean, economy tends to work in chain reactions even with the slightest details.

I must say i find this hilarious. Ads are used all over the world to advertise a certain product, ads give the people a look at what the product is. The ads rivalry shown above might get the customer frightened instead of attracted. I say they might get frightened because we all see ads as an example of what a product is , so by watching this several ads attacking each other it draws several conclusions on me such as maybe the product that is being advertised is not good or that they are desperate for publicity. Ads are supposed to get the people's attention and by attention i mean by having catchy things in the ad and not this feud between brands. This kind of Ad might have two effect repulsiveness of people or attractiveness i think that this shouldn't be done and that only regular and normal ads should be allowed.