How Much Demand Will There Be for Circumventing New York Times Paywall? 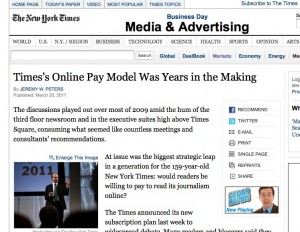 A Forbes.com article by Jeff Bercovici discusses the New York Times‘s plan to shut down a rogue Twitter feed called FreeNYTimes, which is meant to circumvent the Times‘s upcoming metered model (some people call it a paywall). As Bercovici writes:

It’s clever, but it’s not kosher. “We have asked Twitter to disable this feed as it is in violation of our trademark,” says a Times spokeswoman. She adds that the paper has been monitoring and has already blown the whistle on other violations. … I also asked her about NYTClean, a bookmark that defeats the paywall with the aid of four lines of code. The response: “As we have said previously, as with any paid product, we expect that there will be some percentage of people who will find ways around our digital subscriptions. We will continue to monitor the situation but plan no changes to the programming or paywall structure in advance of our global launch on March 28th.”

Well, of course I clicked on the FreeNYTimes feed to see how many people are following it. (Yes, I have a bit of interest in Twitter followship.) And I have to say, I was quite surprised by the number I saw.

Care to take a guess? Go ahead, guess; don’t look at the sentence below.

Okay. As I type these words, at around 6 p.m. EDT on Tuesday, the FreeNYTimes feed has a whopping 152 followers. Am guessing this doesn’t say anything too meaningful about demand for free NYTimes.com content, but still, I’m surprised.

It doesn't say anything meaningful about the demand for free access to the NY Times. Few people want EVERY SINGLE ARTICLE from the Times to clog their Twitter feed via this account. Many, many more will simply search for the account @FreeNYTimes when they find a specific article they'd like to read in its entirety, thus sidestepping the need to follow the account.

Exactly, Jon. I'm not following it already because I didn't know about it, but now that I do, I still won't precisely because I have no desire to see *everything* in my feed.

I added several knuckleheads who openly admitted having 100% WTP on the paywall, hoping that collection will result in not missing much. Its twitter for crying out loud.

It is still free this month, right? Seems like the number of follows wouldn't go up until people actually start running into the article limit.

the bookmarklet will be much more popular among technophiles than the twitter feed will be. no reason to have to search for individual articles you want through it.

besides, why should the times have any right to take down somebody's feed? if you don't like it, change the policy.

I think the Forbes article got it wrong. this is the feed that's been in the news for trying to circumvent the paywall: http://twitter.com/#!/freeNYT

It has quite a few more followers. Not an alarming amount, but certainly not the tiny number you based this post on.

As of now Times is still free with noneed to follow this Twitter site. If still up when paywall begins those numbers will surely change

I am a Canadian and the NYTimes has already put up the paywall in Canada first before rolling it out too the rest of the world on the 28th, we have already found many good ways of getting around the paywall (for the time-being at least), one crafty Canadian has created a 4 line peace of script that you can just put into your IE’s bookmarks bar and when you bump up to the paywall but you just click the bookmark and you can read the entire article. The almost easier way to maneuver around the wall is just to clear your cache, bingo another 20 articles.

So that's three ways I will use their Tweets, without following.

I think the low number of followers says more about the NYTimes' base's general use of twitter than anything else.

I agree 100%. When people are interested in content behind a pay wall, piracy emerges. Although this isn't piracy, it fills the same role. The lack of interest in "pirating" content for free indicates there may be a lack of interest in paying for content.

I don't know how they justify the cost anyway? They eliminate the cost of printing and distributing, plus they'll still have ads. I quit going to the NYT when they put up the registration wall years ago. Paying is ludicrous to me.

You're looking at the wrong one. @freenyt has 3,940 followers with almost a week to go before the paywall goes up.

I must say I congratulate ya'll on now having an ad-free, full RSS feed. I was able to finally remove my "FreakReader" App from the app store. Love the feed, and enjoy reading the full feed in my RSS reader.

I think it's quaint and a bit delusional that NYT thinks this pay-for-news thing will actually work. Virtually no one is going to pay for news. NYT isn't that good; they're all reputation. I give this last ditch attempt to stay solvent about a year. Then again, I may be wrong, I often am.

By simply APPENDING A STRING such as "?smid=tw-nytimes" after the ".html" of an article's URL, you are identified as being 'referred' from a link on Twitter - which is exempt from the paywall.

I'm guessing "smid" = social-media ID; "tw" = Twitter; and "nytimes" is the Twitter handle of the @NYTimes account through which I clicked and which can be replaced with any other Twitter handle or simply any string of text (as the [overly simplistic] paywall does not appear to cross-check Twitter handles in realtime).

Clicking on a link through the Times' Facebook page, the string is "?smid=fb-nytimes" - and appending that in works as well, since links shared on Facebook are similarly exempt.

Playing around with the URLs some more, it looks like the paywall simply tags users with some code that it reads off of the URL through which a user clicks to get to an article.

For example, clicking into the article "Campaign to Fight Air Pollution in Hong Kong Gets Visual" from the Business section page of the Global Edition, my browser bears the following URL: "http://www.nytimes.com/2011/03/22/business/global/22pollute.html?ref=global&gwh=A830D7C72B256BE83356D7A410E9B1CD"

The string "ref=global" tells the system I was referred to the article from the Business section page of the NYT Global Edition. The string "gwh=A830D7C72B256BE83356D7A410E9B1CD" identifies me as some user located in Canada who has breached the 20-article limit for the month and pops up the paywall.

It's an appallingly low-tech system and I can only hope the actual paywall isn't this easy to get around when it is implemented globally later this month - lest the business failure of this flawed system be fallaciously construed as proof of the unworkability of a subscription model for online media.

Just read the NYT website in Firefox with NoScript and... look Ma, no paywall.

I think this is a great example of the type of article you would not be allowed to post if you were still at NYT. Glad you moved!

I'm more interested in whether this says anything meaningful about the NYT paywall. Specifically the pricing structure. Is the NYT encouraging the workarounds with their exceptions to paying for access?