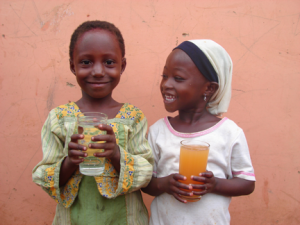 What if a simple ‘nudge’ could massively increase the use of safe water in poor countries?

Today is World Water Day, a day to raise awareness for something we take for granted in America: clean water. Normally I yawn at Hallmark-meets-poverty-program type publicity stunts. Reminds me of many a microcredit “awareness” campaign that paraded superstar microentrepreneurs on a stage, ignoring the need for rigorous evidence to find out if microcredit actually works.

You may be wondering about the above photo. The glass on the left is a nice glass of water. The glass on the right is not a glass of Tang, as I first thought when I saw this photo. Here is the story behind the photo, as Chelsea Dubois writes on the Innovations for Poverty Action (IPA) blog:

About a year ago, a prominent organization contacted Alex [an IPA field researcher] requesting a photo of rural Ghanaians with their drinking water. In response to their request, Alex sent them the above. The organization loved it and decided they wanted to use it on their website to promote various clean water initiatives—but only under one condition: that the photo would need to be edited so that the water appeared to be less polluted. Their rationale was that the water in the girl’s glass to the right was too astonishing, and that visitors to their website would not believe that the murky substance pictured was actually drinking water. But in fact, it is. The photo posted has not been staged or edited. This, believe it or not, is the type of water the residents of villages in Northern Ghana fetch from standing surface water pools every day.  The point here is that most of us don’t really appreciate the scope of the unclean water problem.

But for water, we have some rigorous evidence on what might help. It won’t solve all water problems, everywhere. But the approach should sound familiar to readers of Freakonomics, as it is a classic example of a nudge a la Richard Thaler and Cass Sunstein.

Diarrheal diseases claim two million lives each year worldwide—a loss that is especially tragic because it is so needless. There is a cheap, highly effective ways to treat and prevent diarrhea, but it is woefully underused. Chlorine—dilute chlorine solution for drinking water, to be precise. Just a few drops of chlorine will reliably eradicate diarrheal bacteria from ten to twenty liters of water, even in a dirty container. It’s powerful stuff.

Population Services International has been selling chlorine in Kenya under the WaterGuard brand since 2003 at heavily subsidized rates, but still only 5 percent of people are using it.

Innovations for Poverty Action, in research led by economists Michael Kremer, Edward Miguel, Sendhil Mullainathan, Clair Null, and Alix Zwane, set out to understand how to get people to use more chlorine—from simply giving it away, to community education programs, to cajoling individuals.

The researchers also had ideas from behavioral economics—ideas that had to do with social learning, attention, and trust.

They tested the effectiveness of one-on-one and village-wide encouragement of chlorine use by NGO workers, the importance of social networks in getting people to adopt chlorine, and the impact of paying local promoters to pitch the product within villages. The authors found some interesting things about the first two interventions — village-wide marketing worked slightly better than one-to-one, and community leaders’ chlorine usage appeared to influence other people’s decisions somewhat — but they only led to small and short-term increases in overall usage. Having a local promoter drawn from the village itself, on the other hand, drove up usage both immediately and persistently.

In some sense, the most powerful local promotion device is the example of others in the community. Maybe the way to drive usage, the researchers thought, is to make chlorine use public and visible. So they also designed and tested a chlorine dispenser: a stand with a (free) bottle of WaterGuard locked inside and a special spigot that delivers exactly enough chlorine to disinfect a standard twenty-liter jerry can of water. Instead of adding chlorine at home, as one would with retail WaterGuard, the dispensers were located right at water sources. You add the chlorine when you fetch the water, and it does its work as you walk home with your jerry can balanced on your head. This setup also has the benefit of a natural nudging mechanism: adding the chlorine only needs to be done once, when you get the water. “Bundling” steps together is one key idea in Nudge, to make the onerous-to-remember tasks the ones that get done without having to think much about them at all.

Dispensers were the best approach of all (see the chart below, from their paper). They were at least as effective in driving usage as providing free WaterGuard directly to households, and they didn’t require costly door-to-door distribution. Better yet, the dispensers appeared to engender real, lasting changes in behavior. People in dispenser communities appeared to be disinfecting more, and more consistently, as time went on. In communities where free WaterGuard was provided to households, chlorine usage peaked just weeks after distribution and slid down thereafter; in dispenser communities, usage continued to increase for months after installation, and remained high even a year and a half later.

Thanks to this research, chlorine dispensers are one of the highlighted “ideas” in the Proven Impact Initiative at Innovations for Poverty Action. We’re happy to promote this on World Water Day. Now this clearly is not a solution to all water problems. The orange water in the photo above, for instance, could really use a filter, too. But let’s remember that the clear water on the left isn’t necessarily safe either, as it may need some chlorine. 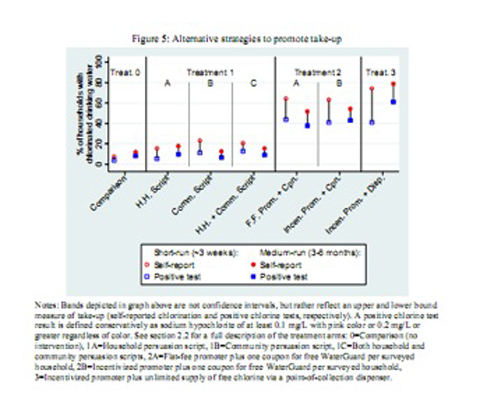 I just thought that was Tang.

Just add chlorine to Tang mix and people will always enjoy clean water. Afterall, who can resist the sweet, sweet taste of Tang?

In case anyone's interested, here's a much more legible image capture of the chart from the paper (at 20% smaller filesize no less):

(The better clarity/smaller size is the benefit of using a PNG instead of a JPG.)

Thanks Matt! I was about to hunt for that. Also interesting to know about the PNG...

Glad it helped Chris. For clarity I should say that the likely only difference was in choosing what format (PNG vs. JPEG) to *save* the image as. To get the image I uploaded was open the PDF paper, change the zoom so the graph was about the same size as the blog post's version, do a screen shot (Alt+PrtSc in Windows to screenshot only the window I was in), open MSPaint, paste the image, crop it, and then "Save as..." Had I saved as a JPEG it probably would have had similar blurry-levels - JPEG is much better for things like photographs, whereas for text/graphs with few colors PNG is usually more efficient, plus it's lossless - it will reproduce exactly what was displayed. (If you saved a photograph as a PNG it would probably be much much larger than a JPEG.)

Also for what it's worth the image included in the article is *slightly* different than the one in the paper that I captured (different Figure number, slightly different caption text, different legend, etc.). I suspect the article image came from an earlier version of the paper.

The real difference between the free samples and the distributor is that the distributor has an unlimited supply of free chlorine (confirmed in the small text of the graph). Of course more people are going to use it when it continues to be free! A fair comparison for the distributor would be constant free supplies of chlorine at the household level.

What keeps you from bringing an empty bottle to the water hole and walking away with a bottle full of the entire supply of WaterGuard?

Adding chlorine to water that measures over 15 NTU (that's a turbidity measurement) creates carcinogenic byproducts. And although it is expected that we would rather die of cancer at the age of 50 than watch our children die of diarrhea at age 6, we can't pat ourselves on the back for this simple solution.