The Business of Bounty Hunting 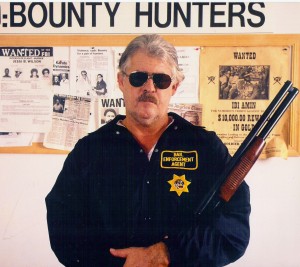 This man has the strongest incentive to catch a fugitive on the lam. (Photo: Courtesy of Bob Burton)

Contrary to popular belief, bounty hunters aren’t necessarily vigilante justice seekers who sport tattoos and long hair. Thinking about “Dog the Bounty Hunter”? This is what Bob Burton, who has been tracking down bail jumpers since the 1980s, has to say about the reality show:

BURTON: It’s grossly exaggerated. First of all, no one in the industry acts, or rather looks like that. We’re dealing with cops, judges, district attorneys. We can’t look the way he looks. Forget the long hair, you stand out, and it’s pure television nonsense the way he looks.

Unlike what one might see on TV and the movies, bounty hunting hardly ever involves airborne high-speed chases or a hilarious reconciliation with an ex-spouse. These men and women approach their work like pros. And there are stats to prove it. Bounty hunters catch about 97 percent of all fugitives they pursue, making them significantly more successful than police. But this doesn’t mean police are shirking their duties.

Alex Tabarrok, an economist at George Mason University and the Independent Institute, says the difference in performance lies in the incentives that drive each professional. Bounty hunters get a pay day only when they nab a fugitive, while police are salaried workers, and are oftentimes juggling several duties at once, making it hard to focus on a single fugitive

Tabarrok adds that there are psychological incentives that influence would-be bail jumpers too: their mothers. On Marketplace, Stephen Dubner talks with Kai Ryssdal about economics of bounty hunting.

Here’s where to find Marketplace on the radio where you live.

Bounty hunters catch about 97 percent of all fugitives they pursue, making them significantly more successful than police. But this doesn’t mean police are shirking their duties.

But does it mean that they are bad at them?

96 percent of all statistics are made up. Where do these figures come from? I know Bob Burton personally. The good is that he is a wonderful story teller, provided that you don't think too hard about what he is telling you. The bad is, that he is a known liar. For decades he claimed to be a Veteran of the Vietnam War (a decorated veteran no less, wounded with a purple heart). He has also claimed to be a former member of the USMC Special Forces (Force Reconnaissance) and a CIA operative. For a while he handed out a completely fake newspaper Clipping about a heroic shootout between himself and some cartel types while getting a bail skip across the bridge from Mexico to Texas.

In today's world (with engineered reality television) this type of narcissistic behavior (if he were forty years younger) would make him a star. His best skill is self promotion.

He has duped and ripped off students and "friends" for years. One of his victims, not only did he steal his background (that is where he started the first force rumor) but he later took him for 25K in a confidence scheme.

This man deserves absolutely no accolades. He is a loud mouthed fraud.

Dissatisfied by critics of the Special Editions and Prequel Trilogy, George Lucas (pictured) stands ready to apply his recent law enforcement training. Insider sources cannot confirm if he will be working in full Boba Fett uniform.

Your's feed is not updating, the last episode on itunes is "Growing up Buffet"
Thanks.

I wonder how Bounty Hunters operate in anti-gun cities like NYC and Washington, D.C. where the mire possession of an unlicensed firearm will get you life in prison, well almost life? Where any attempt to get a license will get your car towed and your chauffeur will have his drivers license revoked for pandering and J-walking.