What's the Best Way to Measure Poverty: Income or Consumption? 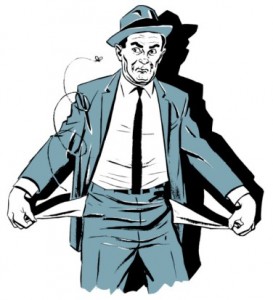 But income is just one way to measure poverty, and a particularly tricky (and narrow) way at that – so says Notre Dame economist and National Poverty Center research affiliate, James Sullivan, who believes that to measure poverty strictly by income fails to accurately reflect people’s true economic circumstances. Income alone ignores the effects of things like the Earned Income Tax Credit, Medicaid, food stamps, and housing subsidies. From a Notre Dame press release on Sullivan’s recent poverty research:

“Income received from food stamps, for example, grew by more than $14 billion in 2009. By excluding these benefits in measuring poverty, the Census figures fail to recognize that the food stamps program lifts many people out of actual poverty,” Sullivan says. “If these programs are cut back in the future, actual poverty will rise even more.”

Using income-based numbers only also overlooks the struggles of many Americans who are tightening their belts – those who are worried about losing their jobs or facing foreclosure, or those who devote a large chunk of their paychecks to paying off medical bills. The standard of living for these people is lower than their income would suggest.

In a recent paper, Sullivan and co-author Bruce D. Meyer of the University of Chicago, argue that consumption offers a more robust measurement of poverty than income. Their key point is that poverty, when measured correctly, has declined over time, which is contrary to official measurements. Here’s the full version of their paper. From the abstract:

This paper examines changes in the extent of material deprivation in the United States from the early 1960s to 2009. We investigate how both income and consumption based poverty have changed over time and explore how these trends differ across family types. Estimates of changes in poverty over the past five decades are very sensitive to how resources are measured. A poverty measure that incorporates taxes falls noticeably more than a pre-tax income measure. Sharp differences are also evident between the patterns for income and consumption based poverty. Income poverty falls more sharply than consumption poverty during the 1960s. The reverse is true for the 2000s, although in 2009 consumption poverty rises more than income poverty… Income based poverty gaps have been rising over the last two decades while consumption based gaps have fallen. We show that how poverty is measured affects the composition of the poor, and that the consumption poor appear to be worse off than the income poor. 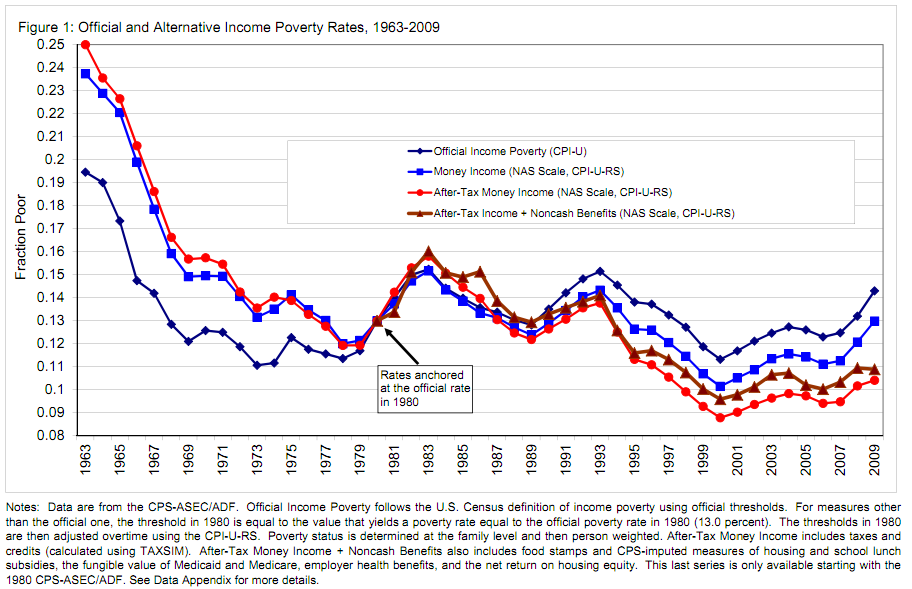 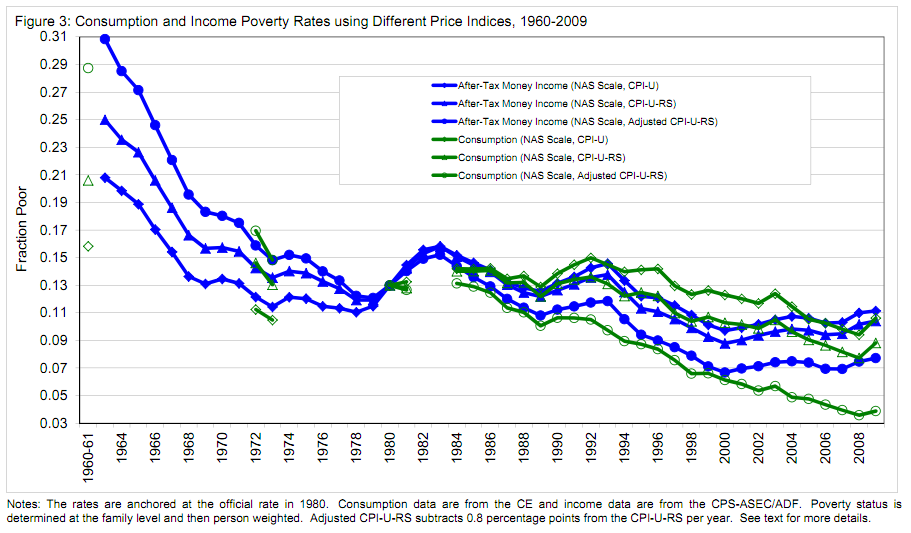 Let's make it real simple: anyone who earns or benefits less than their elected representatives is impoverished.

This makes a lot of sense to me. I have friends who just recently began food stamps and other assistance (and are expecting another child *rollseyes*), they seem to feel better off though their "incomes" have been declining.

But if the government measured poverty to include poverty-fighting measures such as food stamps, it would create a paradox whereby anyone getting food stamps would be ineligible for food stamps.

We don't have third world style poverty, with the famine and disease that it entails, and I like it like that.

There seem to be two important issues - inequality in access to capital and income generating opportunities (still a problem in the US) and significant suffering caused by lack of financial resources (mostly resolved in the US).

I totally agree with this study. As a retail and real estate anaylsis I see this everyday. More and more families are bunched up together and pooling their monies to survive. I see them buying more spam then hamburger. There are a lot of very angry people out there. All this is causing more social stress and discord and I am concerned things are going to get a lot worst.

I believe you misunderstand. The author is arguing the opposite of what you've written. Having an outside agency(such as the government) give you some of the things (such as prepaid cards to buy food) that you used to have to purchase allows you to buy other stuff, increasing consumption.

You need both sets of data in order to get the full picture. And, frankly, to use ONLY consumption would seem very strange to most Americans, because we view poverty-treatment measures like food stamps as something that SHOULD be temporary fixes until people get back on their feet again. Again, to use a medical example, we feel that such measures are treatments for an ACUTE illness, not life-long palliative care for a CHRONIC, incurable one. So to measure only consumption would be like saying that diabetes is not really that big of a health problem, because lots of people are on lifelong insulin regimens. Treating a disease does not make it not exist in the first place.

But doesn't this, almost by definition, mean that there's a problem happening? If a family consumes more than it earns, it isn't acting "less poor," it is acting "more in debt." Perhaps a better method of measuring poverty than either income or consumption is in investment/savings.

I believe you misunderstand the argument. The author is stating that income poorer families are eligible to receive more services (such as foodstamps, free/discount medical care) allowing them to purchase more stuff, while consumption poor families are likely making too much to qualify for these services, making them have to pay out of pocket for essentials (food/medical care), causing them to have to less ability to buy stuff.

Clearly current measures of poverty that just look at cash income are flawed . For instance the majority of those considered to be living in poverty have luxuary items in their homes that even the rich would have envied a generation ago.

Is a family living in poverty if the have in their home:

Surveys have shown these items to be in most homes of families classified as living in poverty.

It's a strange survey.

First because it suggests that current poverty should be measured against a historical standard of living that's 100 years old. That's a helluva vision for the country.

Second, because some durable goods probably cost society less if everyone has them - refrigerators for instance help avoid disease. I'd like for people to be employed, and a phone number seems to help people find work and employers find them.

Third, having something says little about where it legal came from originally. Want to get rid of a television, printer, monitor, etc...? Put it on the curb. If an impoverished family takes it, are they lifted out of poverty? If they rent an apartment and it has a refrigerator is that a luxury?

Finally, if their confident intervals are something to go by, I'm not sure I'd be too confident in their findings.

The only things that might seem too luxurious are subscription items. Having a smartphone is easy, having a plan is expensive. Cable plans especially seem wasteful, at least a phone can be used to find a job.

As for cable plans...

"In 2010 the proportion of America’s population that pays for television dropped for the first time, with the losses apparently concentrated among the poorest customers."
http://www.economist.com/node/21526314

The cable plans are dropping because of things like Hulu and Netflix.

None of these measures make any sense because they treat poverty as a relative phenomenon, generally measured as 60% of the median income. But one can imagine some super affluent society where the median income is $1M/year. In such a society, somebody making $600K/year would fall under the "poverty" line. But the word "poverty" doesn't carry any weight in such a place. Truer would be to say that such a society has conquered poverty.

I think "poverty" has to be an absolute measurement, as in, somebody is in poverty if they're not getting the basic requisites of life, ie, food/water/sheltar. I can't see how that's a significant problem in the US, or any developed country for that matter.

I think it was Phil Gramm who said that America is the only place in the world where the poor people are fat.

We don't have very many poor people here. We have plenty of less-affluent, though. I think culture probably plays a role in that. I think many people reach their comfort level with things like Section 8 housing, food stamps and so on.

If consumption is going up but the rate of wealth / savings for the median person is going down, what does that mean?

I wouldn't be surprised if a large reason that consumption poverty is shrinking while income poverty is increasing is because of a growing portion of the population becoming retired. After retirement, income generally drops considerably, but consumption does not. A similar situation likely happens as people spend more time in school before entering the work force.