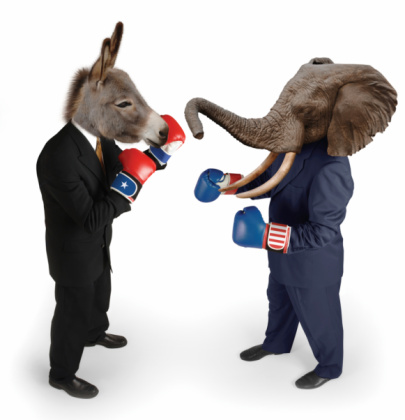 For an upcoming Freakonomics Radio episode, we’ve been doing some research on media bias. We came across this paper by Northwestern researchers, part of a growing body of work that uses computational analysis to turn political speech into data. Simply by examining speech patterns, the researchers were able to predict the political affiliation of U.S. Senators with 94% accuracy.

They broke down the nouns, adjectives, verbs, and adverbs most common to each party. For instance: liberals use the adjective “gay” while conservatives favor “homosexual.” Adverbs preferred by liberals include “disproportionately,” “ecologically” and “indiscriminately”; conservatives favor “morally,” “objectively” and “constitutionally.” Overall, the authors observe that:

Here’s a sample of some more keywords/phrases with high variance between the parties:

This reminds me of the work done by George Lakoff. Some fascinating stuff.

Wow, it's like they each have some sort of message they are trying to stay on. I am shocked...SHOCKED!!

Interesting. I'd like to see such a study applied to a political system with more than two major parties also. I've always thought 'conservative' and 'liberal' are strange and artificial categories for complex sets of views. How would greens, libertarians, Christian social democrats, anti-immigration nationalists and so on look?

This may just be my bias, but does anyone else notice how Conservative/Republicans words seem to have a high associatiion with religion, or issues that are heavily debated in the religious limelight? It seems to me (being quite left winged) that they are still caught up a bit in the past, taking theology into more account in their general platforms than science.

For a lot of people, religion is not part of the past. It is very much part of the present for much of the population.

Anyone remember that game Taboo? Where you had a list of words you weren’t allowed to use or you lost the round? Political debates and speeches would be much more interesting if they made lists like these for each candidate and if they used any of the words then a buzzer would cut them off.

"Simply by examining speech patterns, the researchers were able to predict the political affiliation of U.S. Senators with 94% accuracy."

You can tell what people think just by listening to what they say? Incredible!

No wonder i cannot remember ever using these words. With over-use, the impact becomes obsolete.

Simply by examining speech patterns, the researchers were able to predict the political affiliation of U.S. Senators with 94% accuracy. I guess no one every heard of confounding variables. They never heard of Red states and Blue states. News department in radio and TV stations have standards that match the language that Democrats use because the biggest media markets are blue states. Red staters running for congress sometime go out of their way to use the language of the Red states. I remember how embarrassing it was when people assumed that everyone with a Southern accent hated blacks and now the same idea has come to the fore again.

Democrats gain when they talk about certain issues regardless of the issue or the out come. Obama killing Osama helped the Republicans because defense is a Republican issue. If a Republican talked about education the Democrats gain.

They talk about what helps them not about where they stand.