Nazis, Sunken Ships, and a 67 Year-Old Game of Telephone

Nazis, Sunken Ships, And a 60 Year-Old Game of Telephone
By Jeff Mosenkis

While the quantitative method might not work for hunting, it apparently does for finding sunken warships. NPR’s Alix Spiegel reported this remarkable story about two Australian cognitive psychologists who used a statistical distribution to find two sunken World War II ships, 67 years after they were lost. 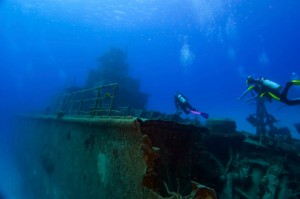 On the evening of November 19, 1941, the HMAS Sydney was off the coast of Western Australia when it exchanged fire with the German HSK Kormoran, and sunk with all 645 crewmen aboard. It was a national tragedy, particularly because nobody knew exactly what happened to the ship and why it sunk. The German crew scuttled their damaged ship, and 317 surviving German sailors were picked up in lifeboats at sea or on shore and interrogated. Seventy offered a last location of the ships (including the captain) but the locations varied by as much as 100 miles, so most assumed they were lying, and none of the expeditions over the years were able to find the sunken ships.

But recently, psychologists John Dunn and Kim Kirsner took another look (paper here) and mapped out a statistical distribution of the locations given. They discovered that it conformed to a hyperbolic, or “lazy J-curve” distribution often found in natural phenomena. The distribution of species within an ecosystem takes this shape, so do genome sequences, and crucially, information reconstructed from memory.

Memory, both inside us and when shared between people, works a lot like that old “telephone” game. Every time a story is retold (even one person retelling the same story) the content shifts a little bit.  When Dunn and Kirsner mapped out all the pieces of information, they found that it mirrored classic studies of story retelling. Knowing this, they statistically modeled the pattern and error, factored in other information (like location of drifting debris) and proposed a search area. A new expedition found the Sydney about 3 miles from the location that Dunn & Kirsner had estimated.

So the statistical method might not work on deer, but who knows, maybe the History Channel will start airing “Quantitative Treasure Hunters” soon.

Where's Surowiecki when you need him?

I heard the story on NPR and I thought to myself, "This is FAR more likely to be a lucky guess than any sort of clever deduction. Psychology has little enough science in it that they are grasping at straws."

This is pretty weak sciencey stuff in my book....

It's psychology, yes. But this is a pretty impressive use of statistics, so we can forgive them for that.
I had heard the joke before, but it was about econometricians.

If you look at the little infograph in the story, the spot where the psychologists "predicted" it would be, 26S 111E, has about 90% of the mentions by the Germans. A 3rd grader could have done just as well.

How about... remove all guesses of that specific area, and what do the rest average out to?

Actually, it is "Behind Recalling Sociology, Rethinking Social science." New Title. So not buried, but right on the surface for someone curious enough to work it out in a way that the responsibility for finishing off the work of Social Science (as encompassing all of the sciences) Goldstein, The Essentials of Sociology 1995) will be that of my colleagues- as it should be.

It is true that there are three individuals who made it possible for me to claim Social Science as `inevitable' thanks to their rediscovery i.e., remembering my discovery of the concept of the derivative. The first taught me the real meaning of the word patience- so thank you for the "time." And the other taught me the real `economic' importance of expediency.

Actually, this is pretty impressive. Before they waded into the reports, nobody knew where these ships were. What they showed is a formal process for doing what presumably reporters (and policemen, detectives, etc) do when they try and dig for information about an event.

Everyone sees an event differently. Reconstructing what happened is usually based on the reliability of a given source. With this process, no reliable source is needed. Apparently for some cases all you need to do is determine and distill the common data points from the descriptions of the event in question.

Will this work for all cases? No.

Was it a lucky guess? Well, the people who originally interviewed all these survivors were highly motivated to find the wreck, and were unable to even find a place to start given the noise in the original interviews. The ocean is a big place. Many times the goal isn't to find the item in question, it's to exclude the 99.9999% of the other locations from the search area.