The Controversial Legacy of Slum Clearance 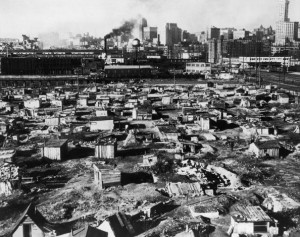 A new study by Vanderbilt economist William J. Collins and Ph.D. candidate Katharine L. Shester looks at the long-term economic impact of the ambitious (and highly controversial) Housing Act of 1949, which used federal subsidies and the powers of eminent domain to “revitalize” American cities, i.e., to clear out the slums. By the time the program ended in 1974, 2,100 distinct urban renewal projects had been completed using grants that totaled about $53 billion (in 2009 dollars).

In one of the rare papers to collect and analyze data related to the program, Collins and Shester come up with a positive picture of its effects – at least in some ways. The authors are clear that the ugliness involved with pushing people out of low-income housing was the reason the program was shut down, and that their results do not “imply that the dislocation costs for displaced residents and businesses were unimportant.” From the abstract:

We use an instrumental variable strategy to estimate the program’s effects on city-level measures of median income, property values, employment and poverty rates, and population. The estimates are generally positive and economically significant, and they are not driven by differential changes in cities’ demographic composition. The results are consistent with a model of spatial equilibrium in which local productivity is enhanced.

Cities that did the most slum-clearing or “urban renewal” had a higher increase in property values, income and population compared to non-participating cities. The results also show that these cities maintained roughly the same demographics, and did not push low-income residents out of cities, but rather redistributed the population.

The results suggest a far less dismal legacy for the U.S. urban renewal program than is commonly portrayed. It appears that cities that were allowed to engage more actively in urban renewal posted better outcomes in 1980 than they otherwise would have in terms of property value, income, and population growth. Moreover, these results were not achieved by merely pushing residents with low human capital levels out of the city.

Though that’s surely cold comfort to those low-income residents turned out of their apartments, and the neighborhoods destroyed for civic centers and right-of-way.

Here are some highlights from the data:

Ted.com has some interesting presentations on this. It turns out that moving to the big-city slum from a small village or farm is a step up in the world for most people. True, it looks like Hell from an airplane, but the slum is a garden of delights and opportunities for most people. Historically slums have grown from cardboard and tarpoline shacks to wood and metal sheeting to brick, tile and concrete structures.

Usually it takes a few fires and some plagues, but hey! that's progress....

If the point is to increase property values, then it works very well. But if the point is to help poor folks have better housing, I think it's a failure. By displacing these people and replacing their run-down neighborhoods with upscale coffee shoppes and nice apartments/condos, you have increased property values...but the poor folks aren't living any better, because they don't live there anymore.

On a smaller scale, think of a run-down trailer with a trash-strewn yard located right beside a really nice brick home. The owner of the brick home figures out a way to get rid of the poorer family (say by closing the school that their kids attend). When that family then moves on, a nicer home can be built where the trailer once stood. So property values increase.

Of course, that poor family is still in terrible circumstances, but at least it's NOT IN MY NEIGHBORHOOD.

If "fixing" the slums means moving everyone out (besides a few token Negroes to show that you care) in order to bring in new people, then this works very well.

But if fixing the slums means bringing in new business, bettering the housing, doing a better job with crime, etc., then it's a shameful failure for the most part.

In my mind, it's not much less than a land-grab by the rich. "Hey, there's some land that we can get on the cheap if we can just get all the commissioners on board. We'll bring in college-educated, upwardly mobile young people by putting in a Starbucks and some art galleries and some nice Georgetowns."

Leveling slums doesn't mean getting rid of a shack next to a middle-class family so that "my" neighborhood is cleaned up. It actually means the opposite: pushing the slum-dwellers out of their poor-people-only neighborhoods and right next door to the middle-class family, where the poor person will benefit from the lower crime rates, better schools, lower pollution, and better job opportunities present in that middle-class neighborhood.

I do recognize and acknowledge, my friend, that you have a legitimate take on matters. But I hope that in return you will recognize that a terrible cost is borne by those who are moved. Many lose track of friends, extended families, their network, and, perhaps most of all, cultural identity and traditions.

This is not to claim that there is some sort of nobility in leaving people in squalor. It may be the case that there is no good answer between moving them out and leaving them where they are. But the truth is that slums did not become slums overnight. There was systemic neglect going on somewhere, I think.

At the same time, again, I acknowledge that putting people in new and better circumstances might help (though a recent study--I think on this site--showed that the boys did not do any better by being moved--go figure).

I have work in housing policy and economic development, and this paper comports with my understanding of the past. In my metro there are a lot of people who shed tears for the neighborhoods lost. But if you really dive into the data it is pretty clear we did too little urban renewal (not that I was around then).

Unfortunately eliminating poverty and helping poor people are not the same thing. You could drastically reduce poverty with mass sterilization/forced birth control, but no one thinks that is really a good solution.

The problem with urban renewal wasn't the whole getting rid of slums
part, it was what went in their place. Between 1950 and 1980 the
United Stated was drawn into the fantastic Le Corbusier city of the
future where everyone would live in tall apartment buildings in large
tree covered superblocks without any dirt of trash. The residents
would drive to work or to leisure via private autos on one of the many
un-congested superhighways that replaced the crowded old surface
streets. Unfortunately the reality was a landscape that isolated city
residents, allowed crime to take hold, gutted commercial districts and the jobs that they provided.

Can we learn a simple lesson from one of the fastest growing metropolitan bonanzas? Edge City? Is there less return on urban renewal than on new construction at the perimeter? Will slum slowly melt away as people move out? Evolution superior to intervention? Think about it. Then get back to us!

Edward Glaeser Explains Why Some Cities Thrive While Others Fade Away (People I (Mostly) Admire Ep. 44)

An expert on urban economics and co-author of the new book Survival of the City, Ed says cities have faced far worse than Covid. Steve talks with the Harvard...

Bapu Jena talks with a barber and a pharmacist whose study brought healthcare to Black men in Los Angeles who were getting haircuts. They discuss its impact...