Cause of Death: Drinking More Acceptable Than Smoking in UK 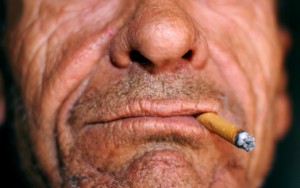 A new study in the Journal of Clinical Pathology from Ian Proctor, Vijay Sharma, Mohammad KoshZaban and Alison Winstanley, reveals doctor biases towards smoking and smokers. The researchers looked at 2,128 death certificates, and 236 postmortems issued at a large London teaching hospital between 2003 and 2009. They found that while alcohol was listed as a major contributor to 57.4 percent of death certificates, smoking was only listed as a cause of death in .5 percent of cases, and usually a secondary cause at that. Considering that 279 of those deaths included either lung cancer or chronic obstructive pulmonary disease — that’s a bit strange.

This study serves as a bellwether of the western world’s campaign to stop smoking. Cigarette packages in the UK carry punitive phrases such as “smokers die younger,” and “smoking can cause a slow and painful death.” More recently, every cigarette pack has been required to carry a graphic image as well: pictures of black lung, throat cancer, and even a corpse. Scarier messages and pictures are coming to the U.S. too. There’s no doubt that our attitudes towards smoking have changed immensely; so drastically, in fact, that the authors conclude that doctors would rather lie and spare a family the eternal shame of having a loved-one remembered as a smoking bandit:

There are many reasons why smoking is not cited on death certificates. One frequently cited reason is the reluctance of doctors to stigmatize the deceased. Interestingly, such reluctance did not extend to citing alcohol as a COD. By not recording smoking on death certificates doctors are failing to gather important epidemiological and pathological data.

And why isn’t alcohol villainous enough to warrant a cover-up?  Perhaps the English have very different attitudes towards liquor than Americans — with a looser, more time-honored pub tradition to fall back on.  A few pints a day, it seems, is less egregious than a few cigarettes.

Further evidence of Britain’s disdain for smoking, but fondness for alcohol, comes from a letter published in September by the British Medical Journal, written by Dr. Paul Jepson. In it, Jepson suggests that, as part of a “fundamental re-think” on smoking, the most effective cessation measure would be to publish a list of the names of the more than 250 people killed by smoking-related disease each day in Britain. He writes: “Any other drug causing a fraction of the morbidity and mortality of tobacco would have been outlawed long ago – okay lets forget about alcohol for a minute.”

The reason for the lack of death certificate mentions for smoking is less a reflection of doctors shielding relatives from shame and more a reflection of the near-impossibility of attributing individual deaths to smoking. Whereas 99% of liver cirrhosis is caused by alcoholism, cancers and heart disease are multi-factoral. There is a very good chance that a smokers's lung cancer was caused by smoking but enough nonsmokers contract lung cancer to add an element of doubt. For heart disease, there are so many risk factors that no heart attack can be confidently attributed to smoking alone.

This is why personal injury lawsuits against tobacco companies nearly always fail. Probabilities based on aggregate data are not enough to prove causation in individual cases.

Interesting post but where do you get the notion that the "English have a very different attitude towards liquor than Americans"? I would think you'd find the same type of data here. Americans love to drink, and there is no significant stigma attached to drinking in the states. And just like England, there is a HUGE stigma attached to cigarette smoking. Again, interesting study but your interpretation vis-a-vis England vs. America seems incorrect, at least in my eyes.

I find this very suprising, for a long time it's been the other way in the UK with smoking being listed as a cause of death even if there is only a minor link.

For instance when my dad died in 1999 it was due to a stroke, the stoke happened when he was in hospital reccieving chemotherapy (sp) for lung and liver cancer, due to the chemo he had to stop taking his perscription drugs for heart, blood and arthritus issues.

As he smoked for a couple of years 40 years ago this was listed as a smoking related death.

A official in the hospital said that this was to boost the smoking realted death statistics so the government had due cause to raise duty on tobacco and have a anti-smoking agenda.

I believe this is the cause. Our government wants an anti-drinking case and is pressing for more damning statistics on the dangers of alcohol.

Doctors in the UK are more likely to suffer liver problems than the rest of the population because they know how much the anti-drinking message is being overstated and thus don't have the same disincentive to drink alcohol that those who believe it get.

I think smoking is more stigmatized than drinking because cigarettes were never deemed safe or beneficial if used in moderation where alcohol can claim that.

You must not be old enough to remember cigarette ads promising that tobacco soothed sore throats and prevented the common cold.

Cigars are much healthier than cigarettes. They have none of the added chemicals, they just consist of leaves. Probably they are even healthy.
Nobody will be able to stop me from enjoying a cigar: http://andreasmoser.wordpress.com/2011/10/29/smoking-cigars/