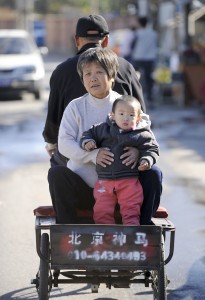 Well..... #1 to say that "the policy" has led to severe gender imbalances is not accurate. Having a restriction on the number of children couples are allowed to have doesn't, by itself, cause a gender imbalance. What causes the gender imbalance, presumably, is parents choosing to have selective abortions, which is, by the way, against the law in China.

In addition to that, there is nothing to say that even without the "One" Child policy, (which actually allows many people to have more than one child), that this type of gender selective abortion wouldn't still be taking place, indeed it is known to take place in other countries that have no restrictions on childbearing. The gender imbalance is similar actually in India, its not quite as high, but its close.

Furthermore, there have been no studies to confirm that 100% of the gender imbalance is due to selective abortion, who knows what kind of biological and environmental factors may be at play? Given that these types of imbalances are present in other dense populations, we can't at all rule out the possibility that there are other factors at play here, and if the likelihood of having a girl goes down in response to high population density (studies have shown a link to environmental stress and the rate of having boys) then the ratio could be similar to even more skewed without the policy.

#2 Focusing only on demographic issues fails to acknowledge the positive benefits of the One Child Policy, and the ways in which it has benefited the country. It's not as if they are implementing this for fun, it's because they are in a dire situation. Yes, there certainly are cons to the policy, but there are also pros, and the question isn't whether there any cons or not, its whether the pros outweigh the cons.

Several papers have concluded that the One Child Policy has done more than any policy or technological development in the world to reduce environmental harm. In other words, the estimate of the resources that would have been used by the number of people estimated not to have been born in China due to the policy, trumps the positive environmental impact of all other policies and technologies.

Furthermore, the "demographic disaster" listed in the linked article on Forbes projects that 24% of the population will be seniors by 2050, while the Census Bureau projects that by 2050 20.7% of the American population will be 65 or over, so the difference between the two countries is only about 3%. I fail to see how a set of policies that yields a 3% difference in the portion of the elderly population constitutes a "demographic disaster".

This article and the Forbes article come off as other more than biased special pleading and a distortion of the facts.

As far as supporting an "elderly" population, there's nothing magic about age 65. I certainly don't expect that when I reach that age, my brain and body will suddenly atrophy, so that I'll be unable to do any sort of productive work. Nor do I think I'm unique, or even unusual: there are plenty of "elderly" people out there doing productive work, and there would be many more if social conditioning and mandatory retirement hadn't brainwashed so many into believing that retirement is a desirable goal.

Sorry, China's one child was the direct result of Chairman Mao's "Hero Mothers" effort. Women who had four or more children got laudits and perks. In 30 years China's population rose from
five hundred forty thousnd to nine hundred thousand.
Mao died.
The new regime had to do something fast.
more at https://robertmagill.wordpress.com/wp-admin/post.php?post=1481&action=edit