One Step Closer to a Cashless Future 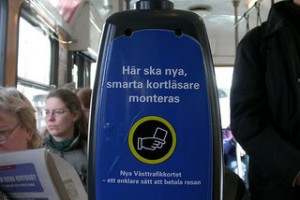 If you’re wondering what our cash-free future may look like — what will it do, e.g., to panhandling? — consider a trip to Sweden. The Associated Press reports on that country’s progress towards phasing out hard currency:

“In most Swedish cities, public buses don’t accept cash; tickets are prepaid or purchased with a cell phone text message. A small but growing number of businesses only take cards, and some bank offices — which make money on electronic transactions — have stopped handling cash altogether.”

Advocates of the shift claim that the transition has decreased crime, bank robberies, and graft. “If people use more cards, they are less involved in shadow economy activities,” says Friedrich Schneider, an economics professor at Johannes Kepler University in Austria. Opponents cite concerns over credit card transaction fees, privacy, and cybercrimes.

Worth looking at London Transport where an 'Oyster Card' prepaid ticket/pass is the only way to pay.

Actually, no. Every tube station I've seen in London has at least one ticket machine where you can pay cash. Oyster cards are much cheaper and convenient, but you've still got the option of cash.

This seems neither new nor a sign of a cashless future. The transit system where I lived in Switzerland was doing this a decade ago, but you could refill the transit card (with cash or credit) at kiosks in most of the larger stations. It's less for some arbitrary cashlessness than to eliminate the necessity for automated change-making machines on every bus or train.

We'll get to see how this plays out: "Do Payment Mechanisms Change the Way Consumers Perceive Products?"
http://www.jcr-admin.org/files/pressPDFs/111411131134_chatterjee--article.pdf

NYC busses also limit cash payments to exact change (no bills) only.
Such systems are bad anyway. Not everyone has access to a credit card or a bank account. They already pay for such limitations. Do we really want to further limit the options for such folks?

We have launched a very appropriate solution called Y-PayCash, a mobile wallet to bring in cashless culture in India. A lot can be done in Mobile :)

There will always be the need to use cash for "certain commodities",that We´d like that do not appear in our bank statements..............im not referring only to illegal drugs,but legal drugs prescrptied by our phisycian for treatment of illnesses that We do not want ur friends and relatives to know of,,pregnancy tests that a teengirl or a single woman buys in case of doubt,..hemorroid oinments,..mouth refreshers,.chocolates and candies if We did promise to reduce weight,.etc etc,..,and of course alcohol,.cigarrettes,..porn magazines..some toys..

A cashless society, seems to be a coming eventuality, for all nations in the future; but to reserve banks they pose a problem.

As I was unable to find anything describing this problem on the web, I’ve simply called it the No Reserve Needed Problem.This problem concerns the ability to conduct monetary policy in a cashless society, when at least one bank within an economy, will have spare money to lend.

Imagine a hypothetical 2 bank economy, where cashless account to account transactions are all that exist. As the two banks wish to lend as much as possible, wishing not to be limited by liquid reserves, they form an agreement whereby if one has liquidity issues, the other will lend it money, at a rate slightly higher than the base rate. If Bank 1 runs into a liquidity problem, it knows that Bank 2 must have funds, for when loans are made, the money lent can only be spent into its own accounts or Bank 2’s accounts. As bank 2 is obliged by standing agreement, it lends to bank 1 ending the liquidity problem. This agreement allows both banks to function without the need for a fractional reserve.

The base rate exists due to the balancing of the money supply and demand for credit. When money is limited, the base rate alters itself to ensure that demand matches supply. When money is unlimited, there is always more money to lend and hence demand for that money, does not need to be reduced by a base rate. Money is unlimited in the cashless hypothetical economy above as one of the two banks will always have money to lend.

This is a problem for a reserve bank, as it uses a base rate to maintain an even keel economy.

The simplest solution is to place restrictions on interbank lending, that force banks to maintain reserves; but doing so is a restriction upon the financial efficiency of the economy.

An interesting solution I call Duration Manipulation Monetary Policy consists of the reserve bank controlling, the minimum monthly repayment of loans, within a no base rate economy; this effectively changes the duration of loans, by forcing them to be paid off sooner or later, based on how much is to be paid per month. Changing the monthly repayment rate, changes the capacity for individuals to repay debt. An entity wishing to get a loan for a sum of money, may not be able to meet these repayment terms and will be deterred from borrowing. This effect is amplified by a risk premium placed on loans; the larger the repayment, the greater the chance of default and hence a higher the risk premium.

This system potentially outperforms current monetary policy in its effectiveness, due its ability to be applied differently depending on the individual. The flexibility to stimulate growth within one region, Industry or social class and not another, gives a reserve bank the capacity to target growth disparities within an economy.

Such a system also gives a reserve bank, much more leverage over economic stability, potentially removing the need for fiscal stimulus, when current monetary policy would become ineffective. Consider the stimulating effect on an economy, that would occur when the loan period is extended to twice its size. The principle fraction would halve and due to the ease at which individuals could pay back loans, the risk premium would significantly decreased in relation to the principle. When you compare this level of stimulating power, to current monetary policy, where dropping interest rates from low to ultra low, don’t significantly alter repayments enough to stimulate an economy when it is affected by an economic crisis.

A cashless economy isn’t needed, for such a system to be possible. Reserve banks can treat their ability to print money, as an unlimited supply; which they then lend to banks with a risk premium attached. This would eliminate the base rate within the economy, allowing the reserve the then use Duration Manipulation Monetary Policy effectively.

This system is also used where I live: Curitiba, Paraná - Brasil.

Who needs cash when Banks and other vendors can find ways to insert hidden fees into every transaction. How dare consumers get away with such convenience.

You should check out Hong Kong's Octopus card, even superior to Sweden's and London's cards.
After its introduction mainly for public transport, the card is now widely accepted in supermarkets, 7-11's, chain restaurants, McDonald's and the like, food courts, bakeries cabs recently have started accepting them.

Now they also do Student, Adult and eldery versions, as well as auto-top up versions too.