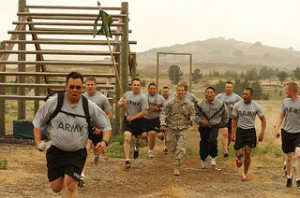 Foreign Policy examines America’s role as a training ground for those who would plot coups around the world.  For example, Yahya Jammeh, current president of the Gambia, reportedly attended a military police training course in the U.S. prior to his 1994 bloodless coup:

Jammeh promised that his would be a “coup with a difference” and that he would stand down “as soon as we have set things right.” Eighteen years later, he is still in power.

In addition to brutal crackdowns on the opposition and the press, Jammeh has become known for his eccentricities, including promoting a banana-and-herb cure for AIDS and rounding up those suspected of sorcery. After he was re-elected in 2011 to a fourth term in a widely criticized election, His Excellency the President Sheik Professor Alhaji Doctor Yahya Jammeh, as he calls himself, told his critics they could “go to hell” and vowed to rule for a billion years.

A lot of dictators went to Oxford or Cambridge too. Maybe Levitt could investigate a link between intelligence, seeking the best training, and political success? Shocking stuff.

Better to have them trained in the United States than in Russia or China or Iran. If dictators are inevitable than I'd want them to be on our side and under our influence.

Yeah, that's what American politicians said about the Taleban and Saddam Hussein as welll...

Saddam wasn't trained in the US or by Americans. The Taleban came in to existence as a political and military force (rather than just a collection of Islamic students and teachers) after American involvement in Afghanistan ended.

so much for the bad faith rhetorical 'why do they hate us'?- they being Gambia, Mali, et al

It would be interesting to know if anyone has ever studied the relative economic and social well-being of the general public under dictators vis-a-vis the (presumably) democratic regimes which they replaced, or which replaced them.

Of course we can always come up with anecdotal horror stories, or success stories, but how does it work out on average? We might also reflect on the fact that the approval rating of our democratically-elected Congress is, I believe, somewhere in the low teens.

I cannot believe anyone commenting here has not mentioned the notorious School of the Americas at Ft Benning.

Seriously? I thought Freakonomics readers and writers were better informed than this. Disappointing.

This a classic example of spurious causality. A few million foreign students come to study in the US each year. If a few of them go on to become dictators, that hardly makes the US any sort of breeding ground. Far more become doctors, engineers, entrepreneurs, artists, scientists, etc. A few also become democratic and able heads of state.

What does it take to be promoted to the rank of dictator?
Our South African president was recently accused of being one by former ANC Youth League President, Julias Malema.