Canada Kills Its Penny; Can We Please Be Next? 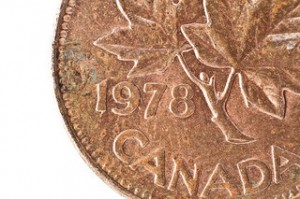 If you’ve been reading this blog for a while, you may know that I am devoutly anti-penny. This includes a rant on 60 Minutes in which I argue that the penny should be killed off, as inflation has rendered it worse than worthless.

The U.S. government remains unpersuaded, but our good neighbors to the north are about to take the leap (following the lead, it should be said, of several other countries).

Here are details from Canada’s Budget 2012 and here’s a CBC report:

In part because of rising prices for the metals it’s made of, it actually costs 1.6 cents to produce every penny. The government estimates it loses $11 million a year producing and distributing the penny, and that doesn’t include the costs and frustrations for businesses and consumers that use them in transactions.

A 2005 study by the Bank of Canada concluded that doing away with the penny wouldn’t lead to any inflation. And Ottawa says similar systems implemented in Norway, Australia, New Zealand and elsewhere didn’t lead to systemic price increases.

It looks like in Neatherland they abolished the 01 cents coins... I spent holidays there recently and I´ve been told so...

Here in Brazil we don't have pennies since, I don't know since when. My little cousins, a 5 and a 3yo, don't know what a penny is. By the other hand, we do have a problem with change since ever, but I think it is a problem in the educational system. Hardly a cashier won't ask you: Do you have 10 cents to help in the change?

Good thing that I found a Canadian penny on my purse yesterday from my trip to Canada. I will keep it forever now.

Brazil and countries like it don't have pennies due to recent bouts with hyperinflation. That the United States can afford to keep its penny is a mark of economic strength. Canadians are finally admitting that their monopoly money isn't as valuable as their neighbor to the south and that's what's about time.

And while you're at it, add color to your paper currency so that it is easier to distinguish a one dollar bill from a twenty. And eliminate your one dollar bill and use coins.

First I thought we did and second we believe in literacy.

I remember when they got rid of 1 and 2 cent coins in Australia. Overall, it made things easier, but there were teething problems...

So some people started working out the cheapest way to buy their weekly shop, often conducting 10's of transactions (where previously it would have been 1). The supermarkets banned that practice and that caused an uproar.

Of course, no one cares now but there was certainly an adjustment period at the start.

Overseas military bases have been pennyless for decades, with no ill effects. Kill the penny!

Although there is no 1 or 2 cent coins in Australia anymore, there is still pricing to support it. I'm a proponent of eliminating these useless things; but there is always an interesting question about taxation I have.

Technically, there is 1 or 2 cents tax free... Across a large enough number of transactions - say McDonalds, this would end up in the hundreds of thousands each year right? Does this money just get 'written' off the books, does it end up in someones bank account, or somehow taken out of the balance sheet - as it's technically unearned, and not even declarable income...

Anyone know how this works exactly?

Can we please include the dollar bill too when the housecleaning is started? It seems that other countries manage to get along with coins for the fiddling small denominations -- Canada and the UK come immediately to mind -- and they've already proven that taking that step does not cause the disintegration of society. And it saves money making money in the long run.

Yeah, its great to have small purchases be less salient so that people can fritter away more of their stagnant incomes on impulse buys. Maintaining the sting of parting with paper currency is a key factor to keep small value item prices sticky and increasing savings.

A penny saved is a penny spurned.

I do not agree with the idea of killing the penny. In that sense, I agree with Ben Franklin that a penny saved is a penny earned. Imagine what would happen if.... I recall numerous occasions of having been mischarged and told that it was an accident. What do they add up to, I do not know. What I do know is that like the number one, the penny allows me to be precise in all my calculations and that precision enables me to save big and profit big too- stock wise and in all transactions. My dad used to tell this story told to him of a broom kept at the cash register and charged to the ignorant customer until one realizes the error. Imagine what the loss of the penny would do to profits. I am certain that those who cannot count would be the losers long-term. Just imagine what the loss of the number one (as in one degree, one second, 1 inc,
1 gram, one event (occasion) , one individual, one bit of understanding.....) would do to science. It would not be real science as we know it.

All rights reserved. Robyn Ann Goldstein, No two words of this text may be used without the publishers permission.

If it ain't broke, don't fix it. Don't we have enough real problems that we could be spending our time & energy on?

This sort of crap is what gives technocrats a bad name. When eggheads try to abolish the penny or change the country over to Metric time in the name of "progress" it turns off the general population to not only those trivial reforms, but important ones like vaccination and better education.

Please Happy Canadian, no coloring our bills and no dollar coins. It actual is quite easy to distinguish the bills and when I travel to Europe I hate lugging around the heavy coins, although I thoroughly enjoy most other aspects of Europe (and Canada for that matter). Even so I think it will all be moot very soon as 'hard' money will disappear or be used so infrequently as to be a non-issue.

In Norway we're killing our "50 øre"-coin (=9 cents) 1st of May, leaving the "1 kr"-coin (=18 cents) as our smallest coin. I don't think anyone here will miss the 50-øre coin, and I don't see why the Americans will feel any different. Maybe US should think bigger and remove both the penny, nickel and the dime?

I will even take this a bit further. Without the number 1, there would be no way to establish without a doubt the concept of "faster than the speed of light" or "empty space."