How Is Keith Olbermann Like a Teenage Brazilian Soccer Stud? 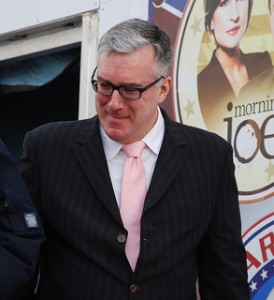 There may be several appropriate answers to the question posed in the headline, but after reading Howard Kurtz‘s account of Olbermann’s split with Current TV in the Daily Beast, only one came to mind.

If you believe Olbermann’s camp — yes, that’s an “if” worth thinking about — the conflict came down to a simple issue: while Current was willing to pay its new anchorman $50 million, it wasn’t willing to spend the money to bring his show up to a professional standard:

[Olbermann’s show] Countdown had been “a daily logistical nightmare dating back to the very first rehearsals,” [Olbermann’s manager Michael] Price wrote back. The response showed “how completely out of touch you and Current management are with the realities of producing a first-rate show.” Viewers were even complaining that they couldn’t record the show because of incorrect settings being provided for DVR machines. The whole atmosphere “more closely resembles cable access than that of a cable news show,” and the problems were “causing low ratings … The show’s production values have actually gotten worse, not better.”

This reminded me of a section of the book Soccernomics

by Simon Kuper and Stefan Szymanski which discusses how op-tier European soccer clubs routinely pay millions of dollars in transfer fees to acquire the hottest young players from, say, Brazil, but then are unwilling to spend further money to properly acculturate these players to a new setting.

The counterexample to this practice is the French club Lyon. As Kuper and Szymanski write:

After Lyon signs the serious boys, it makes sure they settle. [Didier] Drogba notes enviously, “At Lyon, a translator takes care of the Brazilians, helps them to find a house, get their bearings, tries to reduce as much as possible the negative effects of moving. … Even at a place of the caliber of Chelsea, that didn’t exist.”

Lyon’s “translator” who works full-time for the club, sorts out the players’ homesickness, bank accounts, nouvelle cuisine, and whatever else.

Remember, people: everything you buy has a sticker price and then, separately, a cost of operation. To ignore the latter may be wasting the former.

It's just like getting a boat, horse, private plane, private railcar, supercar or girlfriend.

Pretty surprising to hear that football clubs don't do this for everyone, especially since it's a standard service offered to multinational companies by numerous suppliers. At least in London, most relocation agencies can do this for corporate executives, spouses and children who are moved here from abroad. If you do it for a £300,000/year banker why wouldn't you do it for a £3 million/year footballer?

Of course, complaining about lack of standards is a good way for Olberman and his people to deflect any criticism of the actually being his fault too.

This somewhat reminds me of CEO and Head Coach pay. The top guy makes 10-15 times what his number 2 guy makes, even though the number 2 is doing just as much work and is likely just as responsible for the success.

So companies and colleges are willing to pay up to get the talent, but penny pinch on everything else.....then wonder why they're not successful.

Over at Oklahoma State, it is widely reported that football head coach Mike Gundy takes less in salary to be able to pay up and get the best coordinators. Given the recent success of that program, and the number of coordinators that have gotten head coaching jobs, it looks like this is a underutilized strategy.

I would say that the difference is that, in Olbermann's case, there is always something new for him to have a problem with.

I'll put it this way; if the soccer player is having trouble adjusting but was a model citizen in his old place, I would be likely to believe him. If that player was always leaving in a huff, with bridges burned, I would doubt that player's version of events.

The only variable that doesn't change in all of Olbermann's problems is himself.

I can't help but wonder why Olbermann (or anyone else in a similar position) would not have all the production under his control, and sell the network a finished package that's up to his standards.

The soccernomics analogy seems a bit off to me though. Spending on the players (hmesickness, cusiness, translators etc) is like spending on Obermann himself. And Obermann is/was taking a hefty salary anyways. If the soccer club does not invest in the support structures like the coach, equipment, stadium, PR etc, then that can hurt the players because it can hurt the teams billing and performance even when, personally, the players are making a lot of money for themselves

The big difference is that Didier Drogba (not a Brazilian, BTW) *stayed* at Chelsea and became one of its superstars.

Some deal with stuff, some don't...

Other than having hyper-inflated opinions of themselves, you mean?