Adventures in Ideas: Crowd Control — an Interview With Shaun Abrahamson 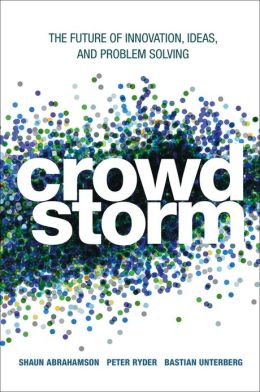 I recently read an engaging book on the use of crowds and crowd-based intelligence for generating innovation. Shaun Abrahamson is one of the authors of Crowdstorm: The Future of Innovation, Ideas, and Problem Solving

I have to admit that I am not a big believer in leveraging crowds for change—I think there is a fetish of the role that masses play in idea formation. I do believe that intelligence is distributed, but I’m an old-fashioned proponent of formal organizations.

But after reading Shaun’s book, I changed some of my stubborn views. The book is a systematic (and critical) appraisal of the role that crowds can play in diverse organizational and personal settings. I think Freakonomics readers might benefit from hearing Shaun’s insights.

Q. Aristotle said that every new idea builds on something earlier by hiding/transforming it. What’s old and what’s “new” in crowdstorming?

We looked across a range of idea seeking activities from searching for early stage startups to finding new logo designs. We found simple patterns where organizations announce needs and other people and organizations respond. Like a job posting, but often with high stakes including prize money but also media coverage, peer recognition and follow on awards.

But we also found new processes. They go far beyond simple announce and respond patterns. They include multiple steps to find ideas but also steps to evaluate and refine them. These more complex process are showing up everywhere from successful Superbowl ad production to startup funding. They shift the focus away from soliciting ideas to gathering feedback that moves far beyond traditional market research or expert panels.

So the main newness is patterns, but I think we’ve also identified some of the elements that are making these patterns work.

Q. You’ve written a book about the power of crowds to develop new ideas, initiate new kinds of thinking, and so on. What motivated you to write this? Meaning, what was a common failure, problem, etc. that businesses were having that sparked your curiosity?

A. I think the problem is a set of assumptions about how they are to organize core value creating activities. I think many organizations conceived before the internet are based on a particular understanding of transaction costs that lead to certain types of organizational structures. In mid 2000’s as I read about Web 2.0 concepts I the ideas were becoming tangible in business plan pitches I was seeing. Entrepreneurs were asking questions about who needed to be an employee and who could be a freelancer? And as time went on, the questions seem to move from whole jobs to specific tasks? Can I have groups of people help me make decisions about which design to use?

So I think the problem was that organizations seemed to assume that the default solution was always to try to create new fulltime positions to solve problems. And I was seeing that as transaction costs shifted, there were some jobs that encompassed tasks that might be better done by multiple people, often people with expertise and perspective not available inside the organization.

Then about two years ago I found frequently found myself in the same situation. I would be talking about a great outcome, where an organization like P&G, GE, DARPA or LEGO was working with an online crowd to design a new product or business. At the end of the workshop or talk, at least one person would ask me –  “Where can I read more about how these projects work?”. And I would rattle of a bunch of research papers and reports. Then I realized I needed a framework to hold various pieces together – I had things like programming collective intelligence alongside incentives research and brief design. It was all a bit of a mess and I don’t think I was helping people to understand more deeply.

So the idea for the book was simple – organize the list of pointers to different research and examples with the end goal of having people step into their own crowdstorm process to solve their particular problem.

Q. From the standpoint of someone making creative content, what are the drawbacks of your argument? Do content producers suffer– do they lose credit, are they poorly remunerated, is it tough for them to put a contribution on their resume and build a career? In other words, I wonder if there are ordinary human capital consequences.

A. Think for a moment the credit roll at the end of a movie. You can see at a very detailed level, each of the people who contributed to the film, from the director to the extras. Where else you see this?

But it is becoming easier to create the credit roll for many more activities. In part because it is easier to measure and reward smaller contributions. Who was behind the consumer product you just bought? Or how about the designer of the graphics on the skateboard helmet? Traditional organizations still don’t name all the contributors to their offerings. In part, I think it is because they have not been forced to measure contributions in a very detailed way. So its easier to reward “leaders”.

But working with large groups of online contributors is different. If I want people to help me, even with simple feedback tasks, I need a way to measure and reward much smaller contributions. I need a way to recognize the person who spends contributes perhaps one hour in a process that takes thousands of hours.

In the process, participants increasingly have a way to get listed in the credits for many different types of contributions, even very small ones. LEGO puts outside designers on their packaging, as does Quirky and Pepsi celebrated the team who created their successful Super Bowl ad. Giffgaff celebrated people who come up new ideas to improve their mobile service offering and GE recognizes its new partners, discovered via its Ecomagination Challenges.

But I think this is just the start. As we can measure more contributions, we’ll start to understand the value of contributions and from this we’ll be able to create new types of reputation systems. And I think as this happens, we’ll see more opportunities for the most talented, we’ll see more recognition for some roles that were difficult to measure and properly reward.

Q. I agree that going outside your organization can help you gain new insights. But doesn’t this compromise the ability to build you and strengthen your own organization– your manpower, their relationships to one another, their ability to weather future storms, etc.

A. I think the idea of the organization shifts. Beyond the full-time employees, and shareholders, you have a new group of stakeholders. I like to use Google and Apple to explain this. Both have mobile operating systems built on open source software components. They need the open source community to succeed, so they feed and support these communities in very tangible ways. The same is true of their developer ecosystems. Look at the resources they commit to supporting app developers for example – from
tools to training materials. Most organizations would be hard pressed to provide the types of resources to their full-time employees.

In some ways, I think this is not too different from outsourcing. It forces organizations to focus on what they need to be great at. And what they can get from outside. I think many will find that they need to be great at things like overseeing production or managing distribution partnerships or marketing or financing. But I think there is one important difference to outsourcing. Wanted to come up with great ideas is not the same as being able to come up with great ideas. So I think more organizations are going to find that they can reduce risk but looking outside for some portion of their ideas. You might call it innovation insurance. In the process, they create opportunities for outsiders, while taking care of their employees and shareholders.

Q. What is the data that tells you that this kind of creativity works? How do you measure success (even relative to other forms of innovation)?

A. In a word, outcomes. If your Super Bowl ad is ranked in the top 10 ads, by multiple metrics, many years in a row, your ad has succeeded. If your product is selling successfully and winning design awards, your design has succeeded. And if you find new partners that result in value-creating partnerships, you have succeeded in your business development efforts. In each of these cases, we found examples resulting from crowdstorming. All of these outcomes come from Pepsi, Quirky (a consumer electronics startup) and GE Ecomagination. And they have used crowdstorming to compete successfully against more traditional business processes.

Some firms are getting very specific. For example, when Victorinox designed a new line of Swiss Army knives, they benchmarked sales. At a minimum, they found that a creative process that worked with a crowd, resulted in 20% increase in sales. So they fixed as many variables as they could and changed how they sourced ideas, but also how they selected ideas. So now they believe this process works for them and they will use it in their design process.

Amazon is approaching this in a similar way. The Amazon Studios team is bringing new TV series to life. Of the 5 new pilots they will introduce this year, 4 are from a traditional development process, which would be recognizable to most TV production teams. However, 1 of the pilots has used a crowdstorm process for development. So now they can compare them and try to establish the value of sourcing ideas and feedback more broadly.

A lot of game companies, both electronic and traditional, make use of crowdsourcing both through forum-style interaction and through extensive playtesting feedback. Electronic ones frequently have automated data-gathering systems for some subsets of this; for example, they can automatically see if their playerbase has collectively found a dominant strategy and adjust in-game values accordingly.

Also, many Kickstarter projects promise backer input in the design phase as part of their rewards. That should provide some fertile data to future crowdsourcing research.

Even before the crowdfunding campaigns begin, some of the successful projects have built communities of supporters who are taking on a variety of roles from helping to shape the offering to getting the word out. I'm certainly interested in understanding more about how this happens.

Also, as you point out, backers participate in a number of ways once the crowdfunding campaigns are complete - would be interesting to know more about how they are adding value. Suspect that there is a great deal of "hidden" value as people help to shape products and also communications.

Currently an interesting example of this with Soma water filter. Even before their product launch, their backers are actively weighing in on their decisions about partnerships and communications. Its revealing some new challenges for small teams who suddenly have many more stakeholders.