One Thought About the Two Deaths in Asiana Airlines Flight 214 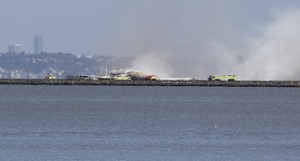 The crash of Asiana Airlines flight 214 in San Francisco on Saturday killed two people. Given the circumstances, it could have been much, much worse.

The last fatal flight of a major U.S. airline was on Nov. 12, 2001, when 265 people were killed in the crash of American Airlines Flight 587 shortly after takeoff from John F. Kennedy Airport in New York.

Number of people killed in U.S. traffic accidents since the last fatal commercial crash in the U.S.: approximately 143,200.*

Number of people killed in U.S. traffic accidents since the last fatal major U.S. airline crash in the U.S.: approximately 442,600.**

* Click here for NHTSA’s year-by-year fatality count; this estimate includes 10 months of 2009 traffic fatalities, a preliminary 2012 figure from NHTSA, and for 2013 a partial (six-month)  tally based on slightly less than half of the 2012 fatalities.

** Includes all traffic fatalities from Jan. 1, 2002 onward, calculated per * note above.

Going back to my journalism days, the seven pillars of newsworthiness are proximity, novelty, prominence, timeliness, rarity, impact, and human interest.

The rarity and human interest in the plane crash trumps everything else. The twitter traffic as the crash was unfolding proves that's what people wanted to discuss.

If a car crash kills two in your hometown, it will make the news because of proximity. But it is not rare, so it won't make the national news. Unless, of course, a victim is a celebrity in which case the prominence of the individual would make it a national story.

This is why so many people are afraid to fly. "News" outlets only feature these kind of stories making it seem like it happens all the time. Can you imagine if the New York Times had a front page article with the headline - "28,000 commercial airplanes, carrying 2,800,000 people took off and landed safely today".

I really don't think fear of flying has much to do with the risk of crashing, either actual or perceived. Rather, it's a combination of things like fear of heights, loss of control, claustrophobia, etc.

I've always had a distaste for commercial flight (and since the advent of the TSA, it would take something close to a life-or-death emergency to get me on a commercial flight), but I've been happily flying small planes and sailplanes for thirty years or so.

The numbers themselves tell us nothing without knowing how many miles are flown vs. how many driven, or a least how much time is spent in a car vs. an airplane.

That said, the number of people killed in traffic accidents is astounding.

Yes. It's noteworthy because 1.) it almost never happens and 2). it generally involves a large number of casualties. The crash of an airliner easily meets both of your definitions of "news".

That said, not to nitpick, but I'd change your first definition to "extremely anomalous"; extremely applies to both of your examples. Lot's of anomalous things happen that are nonetheless not all that noteworthy. Steve Wozniak on "Dancing With the Stars", for example.

I think I remember Gladwell's Blink covering the topic of South Korean plane crashes quite well. Basically, South Korean planes crash at a much higher rate than American planes bc the cultural power gap btw the pilot and co-pilot is so great that co-pilots can't raise objections.

I believe it was Outliers, but yes, and Gladwell also added that there were three factors that lead to the overwhelming majority of crashes: tired pilot, bad weather, poor communication. Weather looked good to me. Looks like it was just a terrible blunder by the pilot.

Actually, in that particular situation bad weather probably would have helped, because they'd be flying an instrument approach. Instead they were (according to reports) flying a VFR approach over water. It is very difficult to judge speed & altitude visually over water, as there are no visual cues.

An airplane crash is news. It seems you are suggesting the crash report should not have been the lead story. I don't think that the reporting of news can ever be based on the probability/statistics system you seem to favor. Your reasoning is odd and is confusing to me. Is an airplane crash not noteworthy?

Perhaps what is "noteworthy" in this story is the fact that "only" two passengers died in this crash, which as you say "could have been much much worse."

I have long thought that comparing death rates to the number traffic fatality numbers would really open people's eyes. We really do worry about the wrong things much of the time.

To me, the most interesting part of this post is the link the the NHTSA figures. It shows a remarkable drop in fatalities over the past few years (both total and in relation to the number of miles driven). I did a quick search to see if there were articles explaining this, and I found a lot a speculation - economic downturn, cell phone laws, medical marijuana laws (!) - but nothing really convincing. This seems like a perfect topic for future Freakonomics investigation.

When you compare it to the horrible runaway oil railcar accident in Quebec where there are at least 15 dead and 30 missing in the same time period, it highlights what irrational creatures we are. Same thing for the tornadoes which tragically killed the three meteorologists that got more play than the numerous lives lost in the fertilizer explosion.The seven pillars pull it all together for me. Thanks.

Not to skew everyone's formulas, but it was confirmed today that one of the two young teens killed at SFO was run over by a firetruck. Derp.