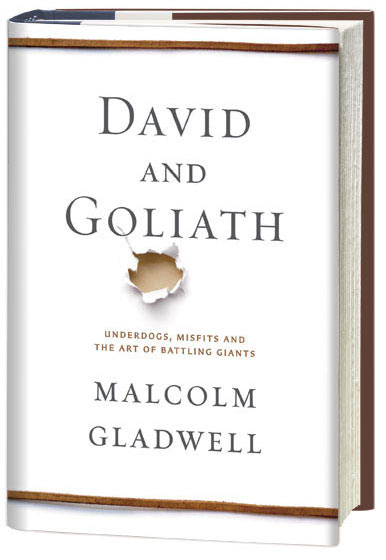 – came out this week.   Like every other book by Gladwell, it is already a best-seller. And having read – and very much enjoyed — the book, I can see why. Gladwell once again presents a variety of interesting stories, this time centered on the question of whether underdogs are as disadvantaged as we believe (the opening story on David and Goliath – which makes this observation – is worth the price of admission).   My sense – from the few reviews I have seen – is that critics have primarily focused on whether the argument they think Gladwell is making is valid.  I am going to argue that this approach misses the fact that the stories Gladwell tells are simply well worth reading (i.e., these stories are interesting and make you think).

The range of stories Gladwell presents is quite impressive. From the opening biblical story to a discussion of the number of students in a school classroom, the impact of dyslexia, the curing of leukemia, the battle for Civil Rights, French revolutionaries during World War II, etc… One has to wonder: where does Gladwell find these stories?

The simple answer can be found in the end notes (which I encourage people to read).  Gladwell primarily employs stories previously told in academic journals and academic books.  For example, nearly a dozen different academic sources are employed to tell the story of David and Goliath.

Of course, someone could just go read the original academic sources.  But I suspect there is a problem with that approach.

To illustrate, let me repeat something that Alfred Marshall, the father of microeconomics, wrote in a 1906 letter to A.L. Bowley.[1] Marshall’s letter serves as a famous comment on the role that abstract math plays in academic research:

Step One: Use mathematics as a shorthand language, rather than as an engine of inquiry.

Step Two: Keep to them until you have done.

Step Four: Then illustrate by examples that are important in real life.

The point Marshall is making in this letter is simple: academic research should be connected to “real life.” But unfortunately, I don’t think Marshall’s advice is often followed. Abstract reasoning in academia – reasoning that is only accessible to other academics (and often, not many of those) – is prized. Actually connecting what is being said to real life is not considered very important.  As a consequence, much of what is said by academics is not read by many people (the inside joke is that the average number of readers of an academic article is essentially one).

So the stories that academics tell just remain in journals that few people ever see.  Consequently, it seems there is a clear market opportunity for people who have some ability to write.  Specifically, Gladwell’s success telling these stories suggests other writers could follow his lead.  Yes, it is possible that the writing skills of Gladwell are quite rare (he is quite good). But the ability to take the first step (i.e. read the stories) should not be that rare.

Of course, there are a few steps after the visit to your local university library.  Gladwell clearly interviews the researchers. He also makes a clear effort to “illustrate what they are saying with examples that are important in real life.”  And finally, he makes an effort to show how a collection of different stories really have a clear connection.   So what Gladwell does goes beyond just being a “good writer.”

I believe there are more than 600 academic journals just in economics.  That is a huge number of potential stories just in the economics field.  All one has to do is start reading!

Here is another take on the David and Goliath story. Were the Philistines really so dumb?

This is my favourite commentary on David/Goliath stories:

" My sense – from the few reviews I have seen – is that critics have primarily focused on whether the argument they think Gladwell is making is valid. I am going to argue that this approach misses the fact that the stories Gladwell tells are simply well worth reading (i.e., these stories are interesting and make you think). "

Seems like the approach the whole Freakonomics empire is based on!

"My sense – from the few reviews I have seen – is that critics have primarily focused on whether the argument they think Gladwell is making is valid. I am going to argue that this approach misses the fact that the stories Gladwell tells are simply well worth reading (i.e., these stories are interesting and make you think). "

You're essentially saying that making stuff up is interesting. The claim that successful entrepreneurs are more dyslectic than others is in my view only interesting if it's true. How could it be interesting if it is false - and Gladwell doesn't appear to have any evidence for this claim.

I have always enjoyed MG's work. He almost invented a genre--narrative theory--to make important ideas accessible. But he's too slick these days--and in this book, he's sloppy. His reporting seems slapdash and he mixes apples and oranges and fails to define his terms. What a pity. If only he would listen to a tough, no-bull editor. Take a look at this rejection letter. (http://bit.ly/1cXaoP1)

Woah, woah. Wait a second. I came into this review having just read some reviews of the type you mentioned, ones which discuss the validity of his argument. I felt like these arguments were slightly missing the point, having read his other books. So imagine my relief when I run into this review, which opens up by saying the same thing.

The problem is, the rest of your review is discussing how these stories came from academic journals, and how he is making the conclusions from academia accessible. Academic knowledge is valuable because it rigorously verifies the claims that it makes, making sure that they are objectively true when other variables are accounted for. If you're starting off by admitting that his claims are not objectively true, then you're saying that this book is great because it makes bad science accessible. How does that make sense?

I wish you had stuck with the idea from the first paragraph - that his stories are valuable because they make you think, whether or not the anecdotes he uses extends to the larger population. His stories are worth reading regardless of whether or not the conclusions he draws from them are true, because it is valuable to see things which do not occur on a daily basis, and it is valuable to share experiences which are not common in the general population. These stories take place in the same reality that everything else does, which means that they have the potential to reveal things that we would otherwise miss. That point is much stronger than the direction that your review took - because your review is self-contradictory.

1) What is the conclusion in Gladwell's reading of the David & Goliah Story?

2) What were his arguments?

3) What are the implications of his interpretation?

Daniel Kahneman on Why Our Judgment is Flawed — and What to Do About It (People I (Mostly) Admire Ep. 27)

Backers of a $15 federal wage say it’s a no-brainer if you want to fight poverty. Critics say it’s a blunt instrument that leads to job loss. Even...