Economists Needed in the Music Business! 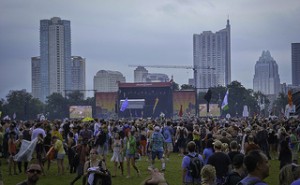 For the first time, Austin City Limits, one of the two biggest music festivals in town, is running on two weekends instead of just one.  Unfortunately, the price for a pass for the second weekend on Craigslist is now down to half the festival sponsor’s original asking price.  Why?

1. The asking price for the second weekend was the same as for the first—not smart when you’re doubling the number of offerings; and the headliners are identical on the two weekends. The amount supplied is double in quantity, but no different in quality or even in variety; double supply, no change in demand.

2. Demand is almost certainly lower on the second weekend, since that is the weekend of the UT-Oklahoma game in Dallas.

It was probably a bad business decision to price the second weekend the same as the first.

I'm not sure you can argue it was a bad business decision considering both weekends were sold out. The customers who paid full price for the 2nd weekend made a mistake and lost money.

Looks like they mimicked Coachella, who priced both weekends the same. I'd guess that all "2nd weekend" of festivals end up lower on the secondary market because it has less of a surprise element goes away (such as band setlists being available).

For 1 weekend festivals (and probably most events), I've noticed the prices peaking about two weeks prior to the fest (planning ahead, higher demand, fear-of-missing-out) and then dropping to near-face value less than a week before the event (too much supply, people's plans changed)

Are you assuming no externality of angering the first weekend buyers by making them feel like suckers for paying more for the same product? I wouldn't be pleased...

Feedback is that The Cure were better on the second weekend (quality) and they alone were worth the price of admission.

But that is isolated and I cannot argue with your premise. At least too much. Consensus was that this was the weakest headlining group in a while. If stronger bands had been headlining, sold out and packed both weekends. In the end $200 to see 20-30 bands is a sweet deal.

Hi! Trivial point: I'm not sure when you wrote this, but the Texas-Oklahoma game was Oct. 12.

I agree it seems strange to double the supply if demand is limited. If the first performance was expected to sell out completely leaving unmet demand, then it might make sense. However, the incremental cost of adding a second weekend is nowhere near the cost of the first weekend; their cost basis would not be doubled. So they may be able to make money even if attendance is low for the second weekend. And with Craigslist and other market-driven ticket "outlets," maybe they figured the market would set its own price without them having to erode the brand by slashing the face-value price of the second weekend.

Saving grace for pass original pass holders, the 2nd weekend got rain out and 33% of the ticket price was refunded.

I wouldn't rely on Craigslist for guidance on 'optimal business decisions'. Coachella, among other festivals that have recently turned to the back-to-back weekend scheme sell out both weekends almost instantly (not to mention at nearly double the rate of ACL), which fuels the mindless scalping scenario on Craigslist. This seems to be simply a matter of ACL's generating less hype relative to other well known festivals.

Anyone who thinks they know the music business should check back in after a nights sleep.

Well....I wonder if the same phenomena applies to single bands that play at a venue for a stretch. Like, I used to see the Grateful Dead a lot. If they were playing Radio City for eight nights as they did in October 1980, what would be the factors? I think everyone would want to se the first show, because you sort of have the "brag" rap where ev eryone has to hear your descruiptions while they say "oh, well, I'm going to night five, man".

Now weekends of course would carry a premium, and the ending night would be special.

My guess for Austin, since we are talking about secondary market, is that a lot of people may have bought tix for both weekends and then decided they had their fill for the second weekend. Maybe something was disappointing, parking was a hassle, whatever. Nobody is crapping out on the first wekend because they had their fill, right? Then you're maybe trying to dump the next week, but there is less of a market because people have plans when you only give them a week notice.