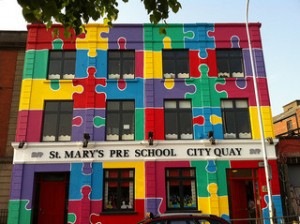 Earlier this year, President Obama announced a plan to provide public pre-K education to low- and middle-income children, a proposal that has provoked debate about the actual demonstrated benefits of early education.  As Freakonomics guest contributors John List and Uri Gneezy wrote here a few months ago, there’s a frustrating lack of information on how effective these kinds of programs are — although List and Gneezy are trying to rectify that gap with their Chicago Heights research project.

A new working paper (abstract; PDF) by Elizabeth U. Cascio and Diane Whitmore Schanzenbach attempts to shed some light on the question by analyzing the effects of universal public preschool programs in Georgia and Oklahoma, two states that have already implemented such programs.  Their findings are interesting: the programs seem to improve some outcomes for lower-income kids, but also result in higher-income families shifting kids from private to public preschool.  Here’s the abstract:

President Obama’s “Preschool for All” initiative calls for dramatic increases in the number of 4 year olds enrolled in public preschool programs and in the quality of these programs nationwide. The proposed program shares many characteristics with the universal preschools that have been offered in Georgia and Oklahoma since the 1990s. This study draws together data from multiple sources to estimate the impacts of these “model” state programs on preschool enrollment and a broad set of family and child outcomes. We find that the state programs have increased the preschool enrollment rates of children from lower- and higher-income families alike. For lower-income families, our findings also suggest that the programs have increased the amount of time mothers and children spend together on activities such as reading, the chances that mothers work, and children’s test performance as late as eighth grade. For higher-income families, however, we find that the programs have shifted children from private to public preschools, resulting in less of an impact on overall enrollment but a reduction in childcare expenses, and have had no positive effect on children’s later test scores.

And, anyway, the fact is that the higher income people are footing most of the bill via taxes, so I see no problem with them making use of their tax dollars (and I'm a leftist).

I think not only is universally available public pre-school a good idea, I think it should begin at age 1. I think that public pre-school should be voluntary from age 1 through 5, but provided for free for those who want to use it.

This would be a huge benefit not only to kids, but working parents, especially the working poor.

How much does it matter if test scores are increased in 8th grade if they aren't increased later in life? You get a head start for 8 years, but then fall in line with everyone else? If you don't get further in the end, who cares?

why not it worked for Castro and Mao. and those who fall through the cracks can always get help in the re-education camps later, huh, rationalrevolution?

Wow talk about a slippery slope. We go from efforts to have a more educated, self reliant and less poverty stricken population straight to communist Cuba. Guess having a heart can lead you to some pretty steep drop offs.

Then please show me the correlation between preschool gov't spending per capita , gainful employment later in life and wealth. Because I am missing it.
Two parent families, and a good role model (lacking in those "poor" neighborhoods you aim to help), and personal responsibility instead of reliance on gov't programs. I would like my tax money to go to those who help themselves.

The problem with having the gov't step in to solve every problem and fill every gap is that the productive class can not afford to pay for those who just expect everything given to them. The takers outnumber the givers.

We have never historically spent more than current on this and similar programs and the net effect of this level of entitlements is not "a more productive class" , rather fewer opportunities and more underemployment and a smaller workforce as a percentage of the population. But if you hear "education" and are conditioned to feel "good" and a majority of the population shares your view than we are all doomed to be Detroit.

Although ideally universal preschool would increase test scores and future achievement for everyone I think the economic impacts it seems to have on the parents of the children shouldn't be understated. And if the only "benefit" for higher income families is that they are able to divert money from child care costs to some other use that isn't so bad, either.

Here in Ontario, Canada there are two years of full day kindergarten funded by the government so children begin school the year they turn four. I know for friends of ours the savings from paying for full day care have played a roll in their family and career plans.

That's not the only benefit though! Lower-income children do get a jump-start that will, on average, last them until eighth grade. From there, if they happen to run into an opportunity they'll be able to seize it because they won't be behind. That is very important because even without empathy as a factor, poverty is huge burden on a countries socioeconomic system.

A leader and a public that do not have the maturity to simply say that we can not afford something. We are running at a deficit, with over $1 million in unfunded liabilities PER HOUSEHOLD, 150k in debt per household. But sure, let's borrow more money to pay for more schooling.

My favorite freakonomics guys, you have disappointed me with this post. Have you not looked at all the research on Head Start?

I went to EMU in Ypsilanti when Head State was just a young program. The longitudinal studies show that kids put in head start (a preschool program funded with my taxes dollars) lose their educational advantage by about 3rd grade, but wait, there is more. . .

Children that have gone to Head Start (the only preschool that has over 40 years of data tracked against children that did NOT go to Head Start) found these children are more likely to:
*Graduate from high school 77% vs 60% from a Florida study
*Have more stable work records with males at age 40 from the program employed 70% vs 56%
*Arrested 5+times at 40 years old 36% vs 55% who didn't attend head start
*Months served in prison 9% vs 21%

This is all from the Perry Project Research Report - http://www.highscope.org/file/Research/PerryProject/specialsummary_rev2011_02_2.pdf

On page 4 of this study is a cost analysis about the actual public impact. The short answer is "In constant 2000 dollars discounted at 3%, the economic return to the society of the Perry Preschool program was $244,812 per participant on an investment of $15,166 per participant." I won't go on as I can't write as entertainingly as the Freak Guys, but I'm so tired of hearing anybody slam early childhood education because it doesn't make SMARTER children. Who really cares if these children aren't smarter? Isn't it awesome that a program like this creates MORE productive, civil and self sustaining people?

That is a really cool study. I would like to see it replicated again to see if those figures hold. One study does not price anything definitively.

I do believe there have been several with consistent results - I just don't have the time right now to list them all . . . but. . .my day job is a reference librarian, so I'll get a bibliography together!

The research I have seen shows that effects of Head Start and other high quality early education programs have long term results into adulthood for life skills and prevention of social problems. The academic advantage wanes at about 3rd grade...but I have always wondered why the preschool programs get a bad wrap for this. Would it not be the K-12 system that has failed to sustain these gains? Seriously, does anyone have an explanation for why preschool programs take the heat for test scores leveling out at 3rd grade?

The information given in this blog is very interesting and useful also. Thanks for sharing with us.