Another Kidney-Donation Story to Make You Smile

A few years ago, we made a podcast episode with Al Roth, the Stanford economist whose work on market design and matchmaking won him a Nobel Prize. His most eye-catching work involves a system to increase the supply of kidney donors (and, more important, kidney recipients).

We followed up that episode with another one, the following year, that told the story of a man named Ned Brooks who was so inspired by Roth’s work that he decided to become a kidney donor himself — a “non-directed” donor, meaning his kidney could go to anyone in need (as opposed to a directed donation to a relative or friend) and could therefore trigger a much larger chain of kidney donation.

More than a few times, we’ve heard from others who have been similarly inspired by Roth (and, now, by Brooks too). Here’s the latest, which we wanted to share with you. It began with an e-mail sent on Feb. 18 by a man named Steve Tucker:

I wanted you to know that I am doing it. I am donating a kidney as a good Samaritan non-directed donor. It is happening tomorrow, Feb. 19th, at Virginia Mason Hospital, in Seattle. And I am doing it largely because of you.

I had been considering donating a kidney for years. It is one of those things that you consider doing and usually never get around to actually doing. But just considering doing it made me feel like a better person, and for a long time, that was good enough. After hearing your podcast, I decided it was time, and I started making inquiries.

That was almost two years ago. It took me that long to get all my ducks in a row and get my year set up so that I could do this. Today, I found out that my donation triggered another one too, and a lady from Barrow, Alaska, is going to get a kidney from an acquaintance of my recipient. That made me very happy.

Anyhow, I don’t think I would have ever made the call if I hadn’t learned about the National Kidney Registry from your podcast. Thanks for getting me off the stick.

I am an engineer on tugboats that sail out of Seattle, and much of my job consists of pretty mindless work, by myself, in an engine room. You keep me company down there on long watches up and down the coast.

Tomorrow is the big day. Wish me luck, and thanks again. 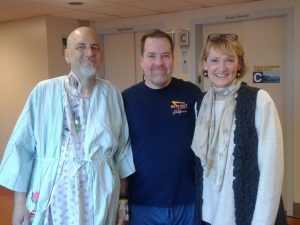 The fellow on the left is Douglas Crist, from Bainbridge Island, Washington. He will be keeping my left kidney warm for me, hopefully for about 30 years.

The nice lady on the right is Wendy Johnson. She tried to donate to Doug, but was not a match. By signing up for a paired-kidney exchange, she got Doug paired up with me. I was a non-directed, altruistic donor. Wendy’s kidney will be going to a lady from Barrow, Alaska, on Tuesday of next week.

That’s me in the middle, by the way. The operation happened at Virginia Mason Hospital in Seattle. We were all able to meet two days after the surgery.

Doug and I are both doing great. The doctors called my kidney “The Beast,” because it had three arteries and two ureters. (Tri-Power with Dual Exhaust, one of the surgeons said.) It took them 6- 1/2 hours to get it out of me and get everything spliced up to where it could be hooked up to Doug. They said it was a “real pisser!”

This all happened because of your show, episode 209. Thank you for that. You do good work.

Our role in all this is of course minimal. All thanks goes to people like Steve Tucker, Ned Brooks, Al Roth, and everyone else who steps up to save the lives of strangers. That said, it is incredibly gratifying to play a tiny role in connecting good people with good information and if that is the only function this entire Freakonomics enterprise ever accomplishes, it will to me have been well worth it.