(FILES) This picture taken on September 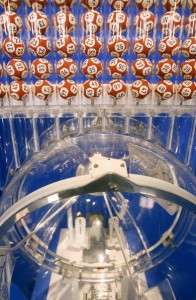 (FILES) This picture taken on September 21, 2007 shows balls used for the EuroMillions lottery at the headquarters of Francaise des Jeux (French Games) in Boulogne Billancourt, outside Paris. The French record for Euro Millions was broken on September 18, 2009 by a participant in Paris, with a 75 888 514 euros (111 609 239.49 US dollars) win announced on the French television channel TF1. AFP PHOTO JOEL SAGET (Photo credit should read JOEL SAGET/AFP/Getty Images)