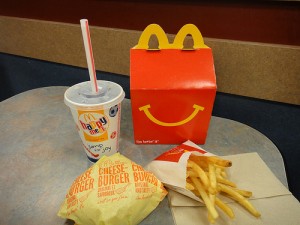 Our latest Marketplace podcast is called “A Burger A Day.” (You can download/subscribe at iTunes, get the RSS feed, or listen via the media player above. You can also read the transcript).

A while back, we posted an e-mail on this blog from a reader named Ralph Thomas:

It has been my gut-level (sorry, pun) feeling for a while now that the McDonald’s McDouble, at 390 Calories, 23g (half a daily serving) of protein, 7% of daily fiber, 20% of daily calcium and iron, etc., is the cheapest, most nutritious, and bountiful food that has ever existed in human history.

This is the kind of statement that most people cannot help but argue with, in one direction or the other (but yeah, mostly in one direction). Is the McDouble really the modern miracle that Thomas suggests, or a food abomination, a perfect symbol of the over-engineered, overabundant food cycle we’re trapped in?

To poke into this question, we set up a debate between Tom Philpott and Blake Hurst, and report their positions back to Kai Ryssdal at Marketplace.

Philpott, a longtime columnist on food and agriculture at Grist, now writes for Mother Jones and runs Maverick Farms, a smart-farming education center in the mountains of western North Carolina. He is in favor of organic farming and against pesticides, synthetic nitrogen fertilizer; he has argued that the meat industry abuses workers and that McDonald’s underpays employees.

Hurst, president of the Missouri Farm Bureau, runs Hurst Greenery. He’s a third-generation farmer, a former hog farmer who now grows 4,500 acres of no-till row crops including corn and soybeans; he also grows a lot of flowers. Among his written defenses of modern farming are “Don’t Presume to Know a Pig’s Mind” (in the N.Y. Times) and “The Omnivore’s Delusion: Against the Agri-intellectuals” (in The American). (And here is Tom Philpott criticizing Hurst’s “Omnivore’s Delusion” essay.)

In the U.S., 85 percent of households are “food secure”; The Economist ranks the U.S. No. 1 in the world on this dimension.

This is totally, utterly wrong.

Everyone knows that the McDonald's double cheeseburger is an even better nutritional deal than the McDouble.

Also I believe the market is hampered a lot:
- by too large suppliers - such as McD (market theory states: no mono/oligopolies, but many suppliesr)
- by govt intervention (direct or indirect subsidies, esp to large suppliers)
- and by the existence of large negative externalities not included in the product price (human health, animal health, environmental degradation, pollution).

Among big receivers of subsidies are the meat (fodder) industry and also even producers of candy (due to sugar subsidies, I'm not kidding unfortunately). At least, this goes for Europe where I live. Amongst others, we subsidise instead of discourage obesity, pollution etc.

Okay, there's some discouragement. The EU, in 2008, spent about 18 million euro for discouragement of smoking. Good work? Meanwhile, that year tobacco farmers received 320 million for cultivating tobacco, from the same EU. Now we're not talking about smoking, but for food comparable mechanisms go. On the one hand, we should less meat, this is even heard from govts. But the EU promoted chicken meat as something fantastic for a couple of years - partially paid for by EU subsidies, etc.

Smaller farmers don't seem to stand a chance and upsizing of companies is the general thing that happens in my country, while in most (my guess) corners of science we hear the opposite: diversify, diminish scale, thereby also reducing risks.

Somewhat comparable: 'dirty energy' receives about 7 times as many (direct and indirect) subsidies as renewables, on average, world-wide. This is just a sickening incentive, a recipe for downfall. Or, if you're a positive person, perhaps you may say it'll lead us to realise even faster that renewables are the way to go. Big food producers use dirty energy a lot e.g. for cultivating the land, transport and fertilisers. There you have a relationship.

Oh, and external costs are not so big? Depends... See e.g.
http://en.wikipedia.org/wiki/Stern_Review
But also, Stern et al. came to a 'true fuel price' that should be about 5* as high as it is in the USA, due to market failure. That's not a small difference with the actual price. That's a fantastic incentive to do better and more healthy.

The freakonomists S&S would do a good job by explaining why a healthy, organic, locally produced product is often so much more expensive than the equivalent imported from another side of the world, made perhaps by near-slavery, using depleting and polluting methods. Meanhile due to market failure, both the organic and 'conventional' consumer will pay (eg by taxes) for compensation of the failing market (subsidies, externalities). That just sounds illogical. Some days ago I saw the reason for obesity was: a burger costs a dollar, a salad costs 4. How is that even possible? Cattle eats plants. People can choose between cattle ('indirect plants') or plants. It seems easy, meat is more complex, takes much more time, it must be quite more expensive. Explain such things, dear freakonomists.

My spouse said yesterday, accidentally: "I go to the McD especially because it's so easy and fast even though I know the food is unhealthy. If there were an organic drive-thru in the vicinity, I would go there any time and leave McD." Any investor in for a new idea?

Your last point; "organic" is a pure marketing term (for food that's grown less efficiently), and says nothing about how healthy the food is. And it has been proven to be no more nutritious than conventionally grown food. You can get unhealthy organic food, and healthy conventional food.

"...pure marketing term.." ? You must have no idea how clueless that sounds. Your last sentence is right on, though the rest rubbish.

I question the definition of "nutritious". Is it just the measurable protein, carbs and fat we are talking about? I contend that food this processed is no longer nutritious by any measure, but I would like to hear from any expert in this field.

I would like see side by side comparison someone who only ate McD's cheeseburgers for a year and someone who ate the lentils and rice for a year.

Full disclosure: I am probably biased as a cancer physician and as someone who would never put any of McDonald's disgusting, trash, pseudo-food into my mouth.

It would be interesting to examine what the costs are of preventable diseases and conditions are for those whose habit is bigger than a burger a day. I've heard nutritionists use a term that shocked me at first, starving obese, to describe morbid obese people who still didn't meet their nutritional requirements even with a high calorie diet. Doctors are citing young people requiring major knee and joint surgery just because their joints can't carry the weight placed on them, the medical cost of an unhealthy overweight society are huuuuuuuuuuuge.

What costs do preventable diseases caused by over-indulgence have on the economy (if any)?

This is absurd. Yes, the McDonald's hamburger is the perfect solution to a problem we don't have -- calorie scarcity. It's the perfect food to induce high caloric intake among poor people.

In places where lack of calories are a problem (poor Africa, India, etc), this food is much, much more expensive than what's otherwise available.

In America, where a too many (rather than too few) cheap calories are a problem, the product is a problem.

I heard this show 6 months ago, and suddenly remembered it whilst watching the film "Forks Over Knifes".

I would like to see a show that critiques this film, as well as the book called "The China Study", the Mcdougall programme, and Dean Ornish's books. These guys seem to be telling the truth, and the implications of the science effects every American.

Peanutbutter beats McDonald's easily.
But only few of us are underweight, so we actually would profit more from eating tree-bark once in a while.