Our latest Freakonomics Radio episode is  “Aziz Ansari Needs Another Toothbrush,” in which the comedian, actor — and now, author — answers our FREAK-quently Asked Questions. (You can subscribe to the podcast at iTunes or elsewhere, get the RSS feed, or listen via the media player above. You can also read the transcript, which includes credits for the music you’ll hear in the episode.) 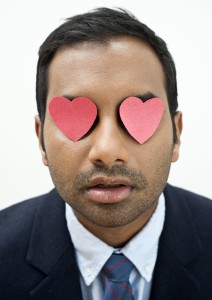 Aziz Ansari is best known for playing Tom Haverford on Parks and Recreation, the NBC sitcom starring Amy Poehler. The show was never a huge hit, but it was beloved — In part because it was smart but also because (IMHO) the show was, at its core, sweet. Although Ansari’s Haverford was perhaps the most selfish and hustle-y character on the show – and yet he too was pretty sweet, deep down.

After listening to this podcast, I’ll be surprised if you don’t think the same thing about Ansari himself. He grew up in Bennettsville, South Carolina, to parents who immigrated from India. His dad worked as a gastroenterologist; and his mom worked in his dad’s office. Aziz came to New York after high school, studied marketing at NYU, but then got into stand-up comedy and stayed in it.

He’s been a comedian and actor for fifteen years now. Which made it time to write a book. But not just your standard book by a stand-up comic. “I’d been offered book deals in the past,” he tells us, “and usually for a comedian a book deal is kind of a cash grab. You basically just write down a version of your act as a book and I didn’t want to do that.”

Instead, he teamed up with the NYU sociologist Eric Klinenberg to write Modern Romance

, an interesting book full of interesting research about how people meet, and mate, in the modern world. (Here’s a Times review; and here’s a 2010 New Yorker profile of Ansari.)

ANSARI:  To me the craziest statistic in the book, the craziest one that blows my mind the most, is in 1967 there was this study … where they found seventy-six percent of women said they would marry someone that they are not romantically in love with. And you know now, just the idea that like now we have all these options of what to do with our lives and our goal of who we want to find is not like oh a decent person to settle down with and start a family with. It’s no, we’re trying to find the love of our lives. We’re trying to find this amazing, elusive thing. That just wasn’t a thing people had the luxury to look for.

Ansari also answers our FREAK-quently Asked Questions (the same ones we’ve put to Boris Johnson, Nate Silver and Kevin Kelly), which is how we learn about his toothbrush problems. He also tells us about the new TV show he’s making for Netflix — and the fact that he doesn’t yet have a title for the show. So he needs your help with this. In the podcast, you’ll hear what the show is about; if you come up with a good title, please leave it in the comments section below. If Ansari picks yours, maybe he will buy a toothbrush for you too.

(You get the point haha)

Thanks for the great show!

Aziz, be prepared for some hardcore fans to start sending you toothbrushes as some kind of inside joke gift. Not me, but I can see that happening.

I totally agree with what Aziz said about social media compulsion. I felt the same way about my compulsion to constantly check my phone and all the time I wasted while doing it. So at the end of June I decided to completely cut off all social media sites for the month of July. It was odd at first (I was someone who CONSTANTLY checked facebook, IG all day long, at least 10 times an hour).

It is now July 23 and I can honestly say my thoughts are so much clearer, I've been more productive with my writing, I don't feel like I'm constantly filling my mind with pointless garbage. I connect with people better because I don't have the crutch of checking my phone in social settings.

He likes food and gets into thought-provoking situations...

That's what I thought of too!

Thank you Dubner for interviewing Aziz Ansari! This interview resonates with me so much! Since getting rid of all of my social media accounts and banning all major cable news networks from my house, I've started a masters program, started a new job, started a freelance consulting business, and I spend loads more time with my friends. :) Yay Life!

"I'm not a Foodie!" would fit the description.

I hope this name for Aziz's show hasn't already been thought of:

Unless the show is only 30 minutes. Then I've got not effing clue.

I also can relate to putting technology out of sight/ out of mind and enjoying life more.

As for the new show:
"Food for Thought" is pretty good.

"Foodies" in which you could tease (ala Portlandia style) the foodie revolution sweeping the nation like a health conscious left wing religion.

How about: "AA Meetings"

Title suggestion for Aziz's show: "Food for Thought" (if it hasn't been used yet...)

He should call the show "Dev-iled Eggs"

Re: The Name of the Netflix TV Show

This is too easy: Arrested Dev

How about DEVine Comedy?