We have just released our second series of five one-hour Freakonomics Radio specials to public-radio stations across the country. (Check here to find your local station.) Now these episodes are hitting our podcast stream as well. These shows are what might best be called “mashupdates” — that is, mashups of earlier podcasts with new interviews. 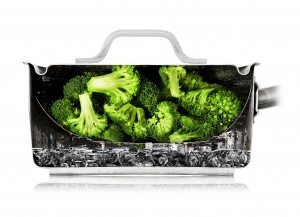 This week: “Eating and Tweeting.” (You download/subscribe at iTunes, get the RSS feed, listen via the media player above, or read the transcript here).

In the “Eating” segment, we look at the tension between “slow food” – a return to the past – and the food future. You’ll hear from slow-food champion Alice Waters and uber-modernist Nathan Myhrvold, who advocates bringing more science into the kitchen – including, perhaps, a centrifuge, a pharmaceutical freeze drier and … a food printer?

Then we dig into the social mores of Twitter. Is it a two-way street? Do you have to follow someone on Twitter to garner a large following yourself? Or are the rules of a digital friendship different from those in real life? Hear about the Twitter give-and-take from sociologist Duncan Watts. Also, Justin Halpern parleyed his hit Twitter feed “Shit My Dad Says” into a best-selling book and a TV show; we learn about the one guy he follows. And Steve Levitt weighs in on just how important (or not) Twitter is in his life.

Did Alice Waters really say that the "Taste" of a Big Mac was "Objectively" bland? I'm not going to argue with her about her opinion of a Big Mac's taste, but taste is by it's definition a subjective experience. This may seem like a unnecessary exercise in symantics, but I think her misuse of the word objective is part of a bigger judgement on taste that I think is unhealthy and inaccurate.

Everytime I heard Myhrvold's Intellectual Ventures as a "research lab" I seethe. Yes, IV does have a small appendix of a research lab, but they are far a big conglomeration of patent trolls trampling on innovation and hiding behind that figleaf of a lab.

Loved the episode but startled that Dubner came out with the phrase "could care less." Can we have a Freakonomics episode focused on the English language and the lack of proper use in the media?

I think the obvious economist response is you understood what he was trying to say and, therefore, there is no need to speak perfectly if everyone understands what you're trying to say. Otherwise, it is pure cost with zero reward.

Perfectly obvious, at least until said economist is the source of such pedantry rather than the target.

Could we please have some new topics that are as long as these mashups? Either that, or don't release the individual short podcasts and just glom them together in this format. I don't like hearing stuff I've heard before, it is frankly distracting as I'm thinking, "I've heard this before, it's bull- oh wait, I missed something new, oh forget it". Then I delete the episode and switch to Pandora.

Can you please stop interviewing that patent troll Nathan Myhrvold? He has done more to halt innovation in this country by abusing our broken intellectual property system than perhaps any other man.

The hacker you interviewed, Pablos xxxxm at IV, needs to learn some of the food chemistry and physics that Myhrvold is so fond of before he pursues his food printer idea further. The processed food industry already makes a lot of powdered food, e.g., eggs, cheese, milk. Without exception, the processing turns these delicious, wholesome foods into toxic substances. Powdered eggs, for example have been found to be extremely high in oxidized cholesterol (see Mark Sisson's blog post (http://www.marksdailyapple.com/powdered-egg-alternatives-and-heating-olive-oil/#more-28583) for details). Milk's proteins must be de-natured in order to turn it into powder (same problem with pasteurization, actually), and denaturing proteins makes them not-proteins, and therefore, unusable by the body for their intended purposes: cellular creation, repair and reproduction, and making enzymes (see drbenkim.com/articles-dairy.html). And since powdered cheese is a dairy product, the same problems occur as with powdered milk.

A little bit of online research by either you or the engineer would have turned up this information.

>>denaturing proteins makes them not-proteins, and therefore, unusable by the body for their intended purposes<<
Oh the horror! We'll soon all be dead from this ... oh... wait a minute...

Might you want to explain that toxic process called 'digestion,' in which stomachs routinely denature proteins?

I can't seem to download any of your podcasts at Itunes, is there a problem at your end? All others download, but Freakonomics does not.

I was really disappointed that you gave Myhrvold's company credit for being innovators who help society. They may come up with cool ideas, but they only do this so they can patent vague versions of them. Then they wait for a real inventor to do the hard work of getting investors and a product to market. Then they claim this person stole their idea and shake them down for licensing fees. They are taxing innovation by abusing the legal system.

Please stop talking to Nathan Myhrvold. How can you describe the hidden side of everything without describing the hidden and far more infamous side of Myhfvold than his red herring bug zapper.

Do your homework. Or at least talk to your friends at his American Life.
http://www.thisamericanlife.org/radio-archives/episode/441/when-patents-attack

A few things this podcast could have discussed that would have been interesting:

1b. If industrial ag. subsidies were altered, and prices at the consumer level were altered, might this affect waste and eating habits? I don't know, but this is the simple and obvious question for an economics centered show to ask a guy who thinks he can solve food waste with a food printer?

If you want to learn about the "hidden side of everything," these are questions worth pursuing.

2. Dubner says, "Kind of how it must have sounded absurd when someone suggested … an ATM dispensing cash, instead of a bank teller?" Really? Does anyone else think this was a bit . . . out of touch, stupid, weird? I don't remember thinking ATM machines were particularly a weird idea.

2.5 Dubner says, "Yeah, it sounds like science fiction, but think about how our current food system might have looked to someone 100 years ago -- to someone who ate a piece of meat once a week if he was lucky, to a mom who could only count on feeding her family whatever happened to be in the root cellar." Honestly, does anyone stop to think about what they are saying, before they say it? Was the mom prevented from from going down to the local market for fresh, seasonal vegetables, meat, etc? I don't get it. In the 19th Century, the precursor to the United Fruit Company was importing bananas into the United States, by the way. " . . . whatever happened to be in the root cellar."

3. Why didn't Dubner ask the scientists about how well human nutrition is understood? It is safe to say that we do not have a good record understanding nutrition. The "inventors" Dubner interviews sound like the kind of people who would have advised against giving babies breast milk, and recommended a mixture of condensed milk, corn syrup, and synthesized vitamins. Maybe not, but that's how they come off in the podcast.

4. Dubner says, "And can you imagine how nice it would be to have a few printers, or maybe a few hundred or thousand food printers, that you could airlift into some disaster zone after a hurricane or an earthquake?" This is an ignorant thing to say. It appears Dubner or the writer of dialogue is ignorant of the fact that the problems with bringing aid to victims of disasters hardly revolves around cooking meals.

My word! If you have followed the recent, horrible tragedies in Haiti, Pakistan etc. this idea is almost offensive.

I am a huge fan of the Freakonomics podcast, though I'm a bit sad that instead of doing new stuff you guys are basically rehashing old topics. Surely there are new things you haven't looked into to discuss instead of recycling old stories?

What's the song and artist at the very beginning of the podcast right before Dubner begins to speak?