Is there a special sauce for school? (Photo by Scott Olson/Getty Images)

We are finishing up the next episode of our Freakonomics Radio podcast, in which we step inside School of One, a fascinating new pilot program from the New York City Department of Education.

The episode is called “How Is a Bad Radio Station Like a Public School?” (By the way, thanks for your excellent bad-song suggestions; you’ll hear a few of them.) While it concentrates on education, the underlying theme is the thrill of customization: how we live in a world where individuals can increasingly customize things for themselves, and how any number of firms and institutions customize things for us, sometimes without our knowledge.

For now, here’s a brief taste of the upcoming episode. (You can download/ subscribe to the podcast on iTunes here, get the RSS feed here, or listen live via the link below.) You’ll hear from Joel Klein, the pizza-loving chancellor of New York City’s schools, and from Steve Levitt too, telling a story that will give hope to anyone who was ever terrible at math in the third grade. 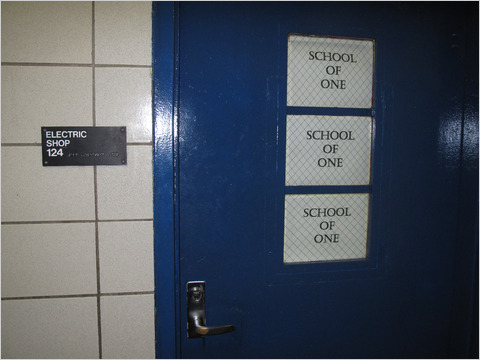 Stephen J. Dubner Reclaimed space: a School of One classroom at I.S. 339 in the Bronx. 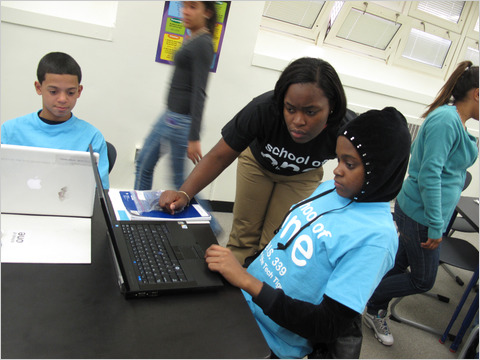 Dube....OMG...So you found some guy with his adrenaline surging with enthusiasm about a NEW NEW NEW theory of how to educate our children. Thank god we finally have the answer!

"But then I began to think, what else is there that we believe? (And I thought then about the witch doctors, and how easy it would have been to cheek on them by noticing that nothing really worked.) So I found things that even more people believe, such as that we have some knowledge of how to educate. There are big schools of reading methods and mathematics methods, and so forth, but if you notice, you'll see the reading scores keep going down--or hardly going up in spite of the fact that we continually use these same people to improve the methods. There's a witch doctor remedy that doesn't
work. It ought to be looked into; how do they know that their
method should work?"

You would think, that thousands of years of education with recorded scores (quasi-data) would yield some scientific understanding of how best to educate our children. You would be wrong. What we get is the Educational Theory a la mode with a catchy new name. Here are FIFTY more educational theories (off the top of my head....):

It is UNKNOWN if and how they work (LOL), but they all sounded good to somebody! I think the basic requirement for a PhD in education is that you dream up a new theory.

I did the exact same thing with paper for years in class. Using a pencil, I would bounce the head of it on paper to make random dots, then connect them with lines to make patterns. You aren't alone.

You got it right- I say- "Back to the Basics" of the 3 R's and the hard way- Teach it in a real responsive way to individual students.

Eric:
That's a pretty meaningless list - what you've done is simply list a bunch of things that are somewhat related to education. They explain very diverse things. It's like listing theories that affect biology and including:
* Quantum mechanics
* Relativity
* Natural selection
And then tossing in a "LOL!" and assuming it means something.

I fully agree that you often have conflicting theories of what works and what doesn't in education (much as in business/management); you also have a lot of sloppy implementation (much as in business/management), where people hear a term (e.g., "cooperative education") and assume they know how to implement it without actually examining the research to see what works. But that doesn't mean that basic theories don't mean anything - nor that they're necessarily contradictory.

Yes, I am being less than kind, inflammatory (my middle name is Molotov) and completely dismissive of the other theories. And it is true that the other theories might have contributed to the best theory of how to educate children.

But I am trying to drive home a point: That regardless of some NEW theory...the schools have done an extremely poor job. Feynman (who was well known for his blasts of arrogant clueless "experts"), says that educational theory is basically not a science at all, but merely a pseudoscience like psychology, astrology, ESP, handwriting analysis and UFOlogy.

You think I am wrong? Then show me the slightest evidence that the "Scientific Method" has crafted our educational system to give the best possible result...as opposed to the personal magnetism or catchy sounding idea or preserving the status quo, or the interests of teachers' unions--or (more cynically) to produce cannon fodder and armies of workers for war-materiel factories.

Subject of current events; Geoffrey Canada's charter school, the Promise Academy, The Harlem Children's Zone, is a fabulous idea. But it is not science and one has to wonder how it will endure when Mr. Canada is gone. Let's face it, Mr. Canada is an uber-teacher and administrator whose personal power and work ethic holds everything together. But it's just his guess about how to do it. And even if he is right...it ain't science.

Now critics ( I have sme) will say that you can't treat the education of people as a science. It is more a question of process and production quality and is highly multivariate. True. But they wouldn't make steel like they educate children.

I have been both educated and an educator. Have had very good and very poor teachers. One principal told me that "nothing works", all you can do is wait until the kids grow up.

I hope he is wrong.

This actually quite old. The Bible discusses several pedagogical methods in the book of Deuteronomy. And many religious homeschoolers take these admonitions to heart.

Whatever your beliefs about the Bible or homeschooling, there are now millions of homeschool graduates out there that would provide real-life data for pedagogical evaluation. And millions more who would be open to longitudinal study.

If you believe in the efficacy of data-driven research, it seems that this is an under-researched sector. That may be due to other biases, but that's another post.

As both an educator, mother of four and wife of a now Registered Nurse who was in a special reading program, I feel I need to say that the proof is in the pudding. (sorry for the cliche) Our schools ARE doing a good job, kids are learning to read and write and 70% are following through to the diploma. In what area are there better results? My four kids all have different internal desires. One does his chores without being told, one doesn't do them after lists, warnings and threats. Two love to read, (one with a reading difficulty) The other two don't read alone in free time and would rather listen to me or to books on tape. The idea of giving kids choices and teaching to them in a preferred style is wonderful. I use the multiple intelligences approach in my classes: some read alone, some in small groups, some with an audio CD, others sit with me and want to ask me questions. My analogy: We all end up in the same place, it's just that some kids ride horse in a group, some take the interstate straight through and others need a taxi. But we all get there and we all enjoy the trip. That's what matters.