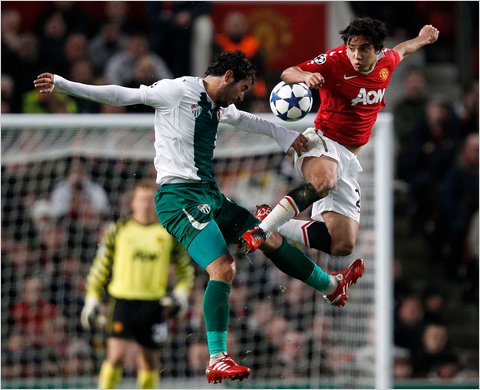 The NFL’s Best Real Estate Isn’t For Sale. Yet.: The NFL is very good at making money. So why on earth doesn’t it sell ad space on the one piece of real estate that football fans can’t help but see: the players themselves?

This weekend, the NFL makes its annual pilgrimage to London for a one-off game at Wembley Stadium. This year, the Denver Broncos play the San Francisco 49ers. The game will be played just like it’s played in the States, but it’ll look a bit different.

For a typical NFL game, the only advertising visible at field level comes from sponsors who, according to the NFL, are related to the playing of the game itself: the Gatorade cooler, the Motorola headsets, Wilson footballs, Riddell helmets and a small Reebok logo on the uniforms. But in London, the league opens up the playbook and sells field advertising for products that have nothing to with the game of football. (Or at least playing the game — beer, for instance.)

“We did it for a year and tested it, and for the four years that we’ve played there now, this will be the fourth year, we’ve allowed that to continue, and we’re very comfortable with it now, for the U.K.,” Mark Waller, the NFL’s chief marketing officer, said in an interview. “They’re used to sporting events where advertisers are on the field, on the sideline.”

But it’s not signboards, of course. Soccer players in England and around the world wear jerseys with corporate logos plastered across their chests. If you landed in Europe for the first time and didn’t know any better, you might think that Carlsberg beer fields its own soccer team, or Emirates airline, or the online-gambling firm Bwin.

It’s the corporate logos that have pride of place on soccer jerseys; the club’s name, meanwhile, is usually relegated to a small patch.

This brings in big money for the clubs. A new Sport+Markt report shows that, despite the recession, the English Premier League (which itself has a sponsor, Barclays) has just set a record by bringing in $178 million this year for its 20 clubs, overtaking Germany’s Bundesliga. According to Sport+Markt, the 10 European soccer clubs this year average more than $23 million each for jersey sponsorship. (The revered F.C. Barcelona, meanwhile, sports a UNICEF logo on its jerseys, but it actually makes a donation to the group rather than taking any payment.)

Which got us to wondering: why doesn’t the NFL follow suit and sell ad space on the one piece of real estate that football fans can’t help but see – the players themselves?

One explanation for jersey sponsorship in soccer is that there are no TV breaks during a soccer game during which ads can be sold. An NFL game, meanwhile, has lots of ad inventory during the game.

On the other hand, an NFL jersey would seem to be a massive ad opportunity, and the NFL isn’t exactly shy about profit-maximizing: it is, by most measures, the most successful sports league in history. 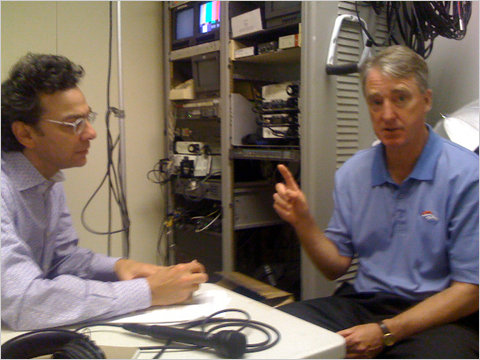 Joe Ellis isn’t a fan of jersey sponsorship. But, he says: “I will tell you that if you did do it, people would get over it very quickly.”

So why hasn’t this happened – yet, at least?

That’s the question we ask in the latest episode of Freakonomics Radio (subscribe at iTunes, get it via RSS, read the transcript, or listen via the player above). The answer is trickier than you might think. And things may be changing fast: this season, for the first time, the NFL allowed teams to sell ad space on its practice jerseys.

You’ll also hear from Tevye – because, when it comes to jersey sponsorships, he may represent the biggest obstacle between the NFL’s present and its future.

If the players put advertising in their pants that too would get a lot of views.

There won't be the same money for the NFL (unless they're willing to sell the helmet), if for no other reason than they have so little space on the jersey. Teams are running out of room to even include the stripes on the sleeves.

I do think it's coming, especially as soccer continues to grow in popularity. I see basketball falling first; they're already incorporating it into the WNBA.

At the same time, the NFL would have much more space to sell on jerseys if it relaxed its steroid rules. These things should all be considered together.

It would probably initially suffer backlash (remember when MLB sold ad space on bases to "Spiderman" then had to stop it before it happened due to backlash?) which would probably hurt whatever advertiser decided to pony up. Long-term though I think fans would get used to it and it would generate additional revenues.

A lot of fans get upset by all the advertising, but frankly I don't see the big deal.

Sure, it makes sense from a profit perspective, but two things to consider:

First, does the NFL really NEED to do this to generate revenue? I mean, it's already by far the biggest sports league in the U.S., do they really need to stoop to this level for another quick buck?

Also, it's very amateur-looking. Ads on jersey's is something only a struggling league should consider. When I see ads on a Jersey, it's usuallyfor a little league baseball team or something. It just screams "cash-strapped" to me, and should only be a last resort.

Lots of sports fans on this side of the pond admire the US style of keeping the jerseys clean - this is what it has turned into here:
http://img.mtv3.fi/mn_kuvat/mtv3/urheilu/jaakiekko/smliiga/20092010/839330.jpg

Note the different ads on different players - even player numbers have been sold as ads.

Say what? One word: "Steelers"

Their logo, the steelmark, was invented by US Steel.

It's probably regulated as a whole by the league, but then I assume it would be a franchise decision who to allow to be the sponsor and for how much money (much like the rights to name a stadium). In that sense, who would the first team be? If they were alone in the sponsorship, that might reflect poorly on the team and could make the rest of the league and its fans, possibly even the fans and players of the team itself, feel like they are sellouts.

If it happened to all teams at the same time, however, I think the backlash would be minimized and revenue, of course, would be highest.

It also kinda sets a bad example for kids though doesn't it? Think high school and college... do we want to start seeing ads on those? If the NFL does it, the kids will want to do it too... heck you already see people actively seeking out biking shirts that have random ads on it because that looks more authentic than a solid color jersey.

Just some food for thought.

Compared to that, a placement of a logo on the uniform is not a big deal.

The hesitance for the NFL not allowing ads on there jersey's probably stems from them not wanting to look like cash cows whose only goal is to gain as much profit as possible. That ideal of the NFL being a cash cow could sit wrong with many people who think athletes are over payed already, thus alienating a good portion of the NFL's market. The NFL's Market is already booming with over 7.8 Billion dollars earned in 2010 so why fix something that isn't broke?

Chico's Bail Bonds would be all over this!

I'd have no problems with this, but the majority of the revenue has to go to the players, and not the owners. And the player should have the right to not have an add and give up the revenue.

I actually think it's a clean solution for college kids who wouldn't be allowed payment any other way.

And to IE, soccer fans tolerate a measly 7 seconds of action per game for 90 minutes+ advertising. Seriously, I sometimes start to watch the grass on the field grow. I won't be sold that all that mid-field passing is action.

I can see it now - the Dallas Cowboys with Tampex Tampons banners proudly displayed on their jerseys. Or how about Viagra or Ex-Lax? Hey, if they cough up the bucks, that's what its all about, right? Everything is for sale, including dignity and honor.
It won't make a bit of difference to me, I quit watching sports, or anyting else on TV, years ago.

I love soccer but detest that the Euro leagues have allowed the players to become walking billboards. I certainly hope it never comes to the US.

To my knowledge, the only major soccer club without a corporate logo on the jersey is Barcelona. They have the UNICEF logo.

What would be the reaction if Pepsi started sacking Coke?

Bob, I don't want to start this discussion here, but please refrain from making a judgment about something that you clearly do not understand.

I can just say that you have the sympathy of the rest of the world. We salute your bravery in the face of this unfortunate disability - being unable to appreciate the most beautiful game on the planet.

Before the NFL puts sponsors' logos on their uniforms, we should require that Congress put their sponsors' (donors')logos on their business suits. Let us know who is sponsored by Goldman Sachs, Exxon, Cargill, etc.

Budweiser on the front of the jerseys.
ExLax and Immodium on the back of the pants.
Tylenol on the helmets.
And have the players share the additional revenue.