What Keeps Glenn Beck Up at Night?

Listen now:
What Keeps Glenn Beck Up at Night?

A few weeks back, I was a guest on Glenn Beck‘s radio show. Something interesting happened before we went on the air. He noticed the book I was carrying — Physics for Future Presidents: The Science Behind the Headlines, by the Berkeley physicist Richard A. Muller — and asked me about it. I endorsed it rather enthusiastically. He said it sounded like a book he’d like to read, so I went ahead and gave him my copy (and, yes, Dr. Muller, I ordered another one for myself).

A few days later, one of Beck’s producers e-mailed me to say that Beck too liked the book, and did I have any more recommendations? So I sent him a list, cobbled together from here, here, and from this blog. Then Beck read those books too.

This was the only time I’d ever done an interview and even had someone ask about the book I happened to have with me at the time, much less want to read it, and then read some others. I was pretty impressed. Beck has an awful lot of fans, but he has a lot of detractors too — and my sense is that those detractors have miscast him as a know-nothing villain.

As I was leaving that radio interview, we started talking about safety gear — football helmets, specifically, and how better helmets may lead to worse head injuries, since the extra layers of safety seem to produce more aggressive behavior. That’s when he mentioned his new car, a “death-proof” Mercedes, and he wondered if its amazing safety features were encouraging him to drive more recklessly. (It should be noted that he doesn’t have this new experimental Mercedes, which is apparently even closer to being truly death-proof.)

So I asked him if I could ride home with him one night in his car and talk about these issues. He agreed: 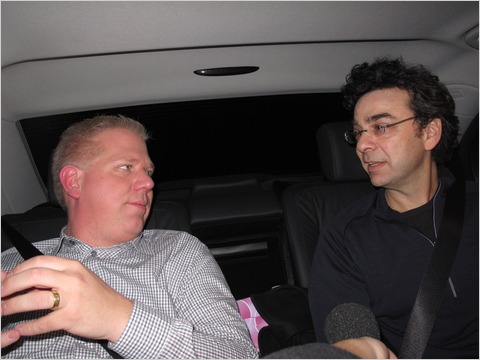 Photo: Molly Webster Beck and Dubner in the “death-proof” Mercedes.

That interview wound up in our first Freakonomics Radio podcast (which you can get here at iTunes or here via RSS feed; by the way, it is currently the No. 1 podcast at iTunes, so … thanks!).

The podcast conversation focused on Beck’s car, but he is a pretty expansive guy, so we talked about quite a few other things as well — Beck’s own fears, rational and otherwise, and the one thing that keeps him up at night.

"detractors have miscast him as a know-nothing villain"

The character he plays on his TV show is a know-nothing villain.

"those detractors have miscast him as a know-nothing villain"

The left's belief that people who disagree with them are stupid and/or ignorant is arguably the right's biggest advantage in politics.

Tim is correct, there is a big difference between what Beck really believes and what his charachter believes. His Fox and radio show persona is a paranoid condensation of the worst aspects of American political culture. That character is a kind of perfomance art. Beck is laughing all the way to the bank. Or maybe he's right and we should all buy gold from his advertisers before the Obama administration slaughters us all in the name of socialist collectivism (or something).

What is it with people at Fox News, when they go on the air they have to act like they are completely uneducated. They're playing to an anti-intellectual crowd in order to make themselves famous, with no concern as to the consequences of their actions. How long can they call Obama a communist who is trying to destroy our country, before some nutjob decides to save the country by assassinating him. It's one thing to disagree with him and criticize his policies. It's quite another to paint him as an extremist Muslim terrorist from Kenya. These supposedly "grass roots" tea party movements are really just a massive marketing campaign by the Fox News corporation.

I'm not sure the left views the right as stupid as much as selfish and greedy.

...and the right's belief that they know where public opinion stands on issues is arguably the left's biggest advantage in politics:

I think of it as "wanton ignorance", but it is supposed to be entertainment. Unfortunately, it plays into a certain laziness in those who seek simplistic resolutions to difficult problems. For many, it's easier to complain than to work for a better world. To knowingly engage in this cheapening of the dialog, as is the case with many politicians as well as entertainers, is to abdicate any responsibility as a citizen. That is a burden on the rest of us.

For anyone interested in books about science recommended by top scientists, this is a goldmine:

Detractors haven't cast him, he casts himself, and profits from it nicely. The whole Fox agenda is to prey on the fears of the most paranoid sector of society (far right) in order to push their pro business politics. Does anyone ever consider who owns Fox (Rupert Murdoch)? That one man controls so many other people via his influence on the media is to me a little alarming, but all the conspiracy theorists don't even look at that. Why? Isn't good ole Rupert closer to being the Anti Christ than Obama ever will be? The bible notes the anti christ will be hidden. Stop and think about it (if you're one of those religious conservatives who worry and think about such things). I'm on the left and I agree with Beb, folks on the right are short sighted and too easily manipulated by the money men. They show a lack of awareness of the interrelated nature of the world that I find alarming. Do you really think you can let all the poor defaulting homeowners go to hell (and all the other unfortunates who don't practice "personal responsibility" whatever that is?) and it WON'T affect you? Get real. Study Economics!

Sounds like Beck's just desperate for somebody to hip him to some good books. Or maybe for some respected journalist to mention to the public that he reads books. I'm underwhelmed.

He confides that he's educating himself WHILE he spouts his opinions to millions of fans forming their opinions based partly on his spoutings. I guess there's no money in waiting till you KNOW what you're talking about! "We listen to too many experts" indeed!

Stupid or not, I find his behavior reprehensible and question the taste, judgment, and ethics of anyone who would sit down for an interview with him, let alone watch or listen to his show.

Freakonomics is here by officially removed from my daily browse list....

I think Beck has a massive number of dots in his head. He just seems to connect them very very strangely.

I took Muller's Physics for Future Presidents class. Only textbook I read cover to cover! Great book and great lecturer, they have his archived webcast lecture on the webcast.berkeley.edu site, if not this current term but in 2008 or 2007.

I'm a fan of Beck's. I see that one of the books you recommended to him was "Nudge". I wonder what his thoughts on this book were, since he's been critical of Cass Sunstein on his show?

Beck is neither ignorant nor stupid. Blatantly manipulative of his ignorant and stupid audience, is how I'd characterize him. The list of things he strings together before tilting his head like a "cute dog," as he insists, "not saying they are connected" as he connects them over and over by association.

Funny how he was so obsessed with Obama's "associations" because he understands the power of unconscious association. This is how many wrongfully convicted prisoners are identified by eyewitnesses. If one person shows up in both the photo line-up and the actual line-up, the mind begins to say, "hey, i've seen that guy before." Pretty soon we're reading about "that guy" getting out of prison after 15 years for a crime he didn't commit.

Beck claims he's a Christian (Mormon).
Do these people even have a clue?
He lies so much its hard to count....
Reprehensible what he says on air, McCarthyism all over again.

I am sure Himmler read some interesting books as well.

Nice job by poster #11 of illustrating the point of #2.