The Troubled Cremation of Stevie the Cat (Ep. 142 Rebroadcast)

If there’s a death in your family and you choose to have your loved one cremated, wouldn’t you expect that the remains that are returned to you belong specifically to your beloved? Of course you would! Would you expect the same if the dearly departed happens to be the family pet? I suspect the answer is still yes. But in the fast-growing pet-cremation business, how do you know that the remains you’re getting back are indeed from your pet?

This week’s podcast is a rebroadcast of our episode called “The Troubled Cremation of Stevie the Cat.” (You can subscribe to the podcast at iTunes or elsewhere, get the RSS feed, or listen via the media player above. You can also read the transcript, which includes credits for the music you’ll hear in the episode.)

Our story began when we got an email from a listener named Jon Remkus:

REMKUS: “Hello. This is kind of a long shot and a bit out of left field, but I was curious to see if there would be any interest in trying to prove […] that the cremated remains from certain pet crematories are unlikely to be those of a particular pet. Is there any interest?”

Remkus, it turns out, runs a pet cemetery and crematory near Chicago. So he plainly has a dog (sorry) in this fight. When he says that “the cremated remains from certain pet cemeteries are unlikely to be those of a particular pet,” he is talking about his rival crematories. How did he come to this conclusion?

As producer Katherine Wells explains in the podcast, Remkus was suspicious that his rivals could charge so little for an “individual” or “partitioned” cremation, so he hired a private investigator to carry out some tests. When the results of his test came in, Remkus was pretty sure that what he got back wasn’t what he sent in. 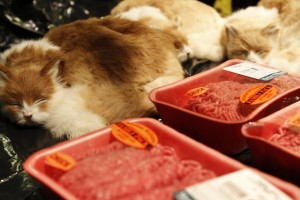 Because we had no way of independently verifying Remkus’s tests, we decided to run our own experiments. We followed the Remkus protocol: procured fake cats (made from rabbit fur), stripped the fur off and stuffed them with hamburger meat, deposited the fake boneless cat in a plastic bag, preserved them in the freezer until the crematories sent their pick-up guy, and paid for a cremation of a series of three “cats” who all came to be called Stevie.

So what happened? Did the crematories call and say, What the heck are you guys up to? or, Ahem, sorry to inform you but there was a problem with your dead cat — he seems to have burned down to almost nothing, and we’re afraid there aren’t many remains to return? Or did they duly return a set of cat-size cremains that belonged, quite possibly, to someone else’s cat (or dog, or deer, or gerbil)? 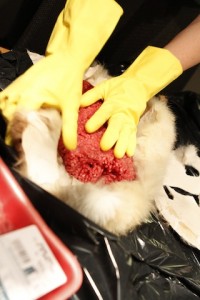 Stuffing raw hamburger into the fake “cats,” which were made from rabbit fur.  (Photo: Michael Katzif / WNYC)

You’ll find out in the podcast. Suffice it to say that the result did lead us to visit Nicholas Petraco and John Reffner, a pair of forensic scientists at John Jay College of Criminal Justice, to analyze the remains that were returned to us.

We should be careful not to assume that these crematories are doing something wrong.

We followed up with the three pet crematories to try to understand what may have happened. One of them, Pet Cremation of New York, declined to comment on the record. The second, Pet Crematory Agency, wouldn’t go on tape but they did send us a written statement, which noted that the form we signed when we turned in Stevie said that he was indeed a cat, and that they would need further proof that the Stevie we sent wasn’t a cat.

The third, Hartsdale, also sent a written statement, 16 pages long, which vigorously denied any improper handling of pet remains. It said that Hartsdale “adheres to strictly monitored and enforced procedures and safeguards throughout the cremation process to insure the respectful treatment of pet remains from intake through return.” Furthermore, Hartsdale says, the contents of our bag were placed in an individual stainless steel tray, put in the crematory furnace, and upon completion of the cremation process, the cremains “consisting solely of the skeletal remains of ‘Stevie’, were removed and processed by pulverizing the bones.” Hartsdale also included a copy of a form signed by an employee stating that the ashes are Stevie’s ashes and that this employee takes personal responsibility for the cremation. 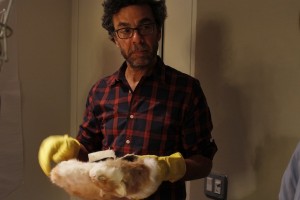 Stephen Dubner with one of the three fake cats that would be sent to three New York crematories for the test. (Photo: Michael Katzif / WNYC)

Hartsdale later sent us an addendum to the original statement, saying that “active commingling of cremated remains will occur when you perform a cremation with more than one pet in the chamber.” They attached a newsletter from the Pet Loss Professionals Alliance, which supported this.

This reminds (and oddly the timing as well) of the This American Life story shared by David Sedaris' about cremating his cat and not really knowing what to do with the remains or the significance of the ashes, in addition to the range of emotions that come with the decline and death of a pet:

The test used seems a bit unfair - a test that would result in little to no remains could simply run into an employee who feels badly that the ashes of one pet seem to have disappeared, and attempts to make up for it so as not to upset the owners.

... either that, or he doesn't want to upset his boss because he has 'lost' the ashes. I agree completely. I can imagine how an employee would be tempted to rather take the ashes from another animal and get on with his day than to solve the puzzle why everything just burned away.

Completely agree. The trace element compound is a much fairer test. Looking at the experiment from the perspective of an employee, of course you would put remains in the urn. The crematorium cannot explain where the remains disappeared to. It's a flawed, callous experiment.

I do wish you (or someone) would look at why so many people seem to place such high values on dead bodies, whether animal or human. Consider, for instance, the enormous effort that goes into recovering bodies after plane crashes, ship sinkings, and other disasters, often to the point of endangering the living people doing the recovery work.

I expect better from the sort of minds that usually make such excellent programming. The titanium oxide was a far more logical test.

Why no information on what the Attorney General's office did with your referral, or if they chose not to open an investigation, why not?

I didn't like the tone of this episode. Even if the crematoriums are lying, I feel like digging this case won't make anybody feel better. If there was no ashes remaining from a real cat for some reason, would it really be better for anybody to call the owner and tell that? Would that help with the grieving process. To me ashes are more like a symbolic thing, that there is something and someplace where you can remember the ones you have lost, not the exact contents. I really feel the episode would have been better, if you had laid a few thoughts on this issue also.

i realy wonder why you did not test (secretly ofcures) Remkus with a Hamburger cat......

This is quite disturbing since one of my dogs was cremated betty1002@ Hartsdale.

This might be a very minor complaint (?), but it might have been better if you'd proofread better for "typos". E.g., 'that would be send to', 'Hartsale'...

Apparently, pet cremation fraud is rampant and I cannot be confident that the remains I receive will indeed be from my pet. If given an option by the vet, I will ask for my dead pet's remains back so that I can bury him in my yard myself, the old-fashioned way. That's how I have always done it before, although I am not sure it is legal. I've never had a pet die or be put to sleep at a vet yet so I am not sure that they allow it.

The fake cat test is not at all valid. If the crematorium responded as you suggest, they would be defenseless against extortion and blackmail. For all we know, fake cat scams are commonly known by crematoriums. What they did would never effect any legitimate customer.

Old news guys. My dog was (not) cremated back in the early 90's in NY. Tossed in mass graves with all the others. Owners eventually convicted of mail fraud http://www.nytimes.com/1992/01/17/nyregion/2-convicted-of-mail-fraud-in-pet-burials.html

Has there been an update or State investigation?