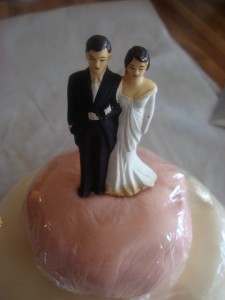 This week’s episode is called “Why Marry?” (Part 1). (You can subscribe to the podcast at iTunes, get the RSS feed, or listen via the media player above. You can also read the transcript, which includes credits for the music you’ll hear in the episode.)

This episode is about all the ways that marriage has changed over the last 50 years. We begin by challenging some of the myths of modern marriage. For instance: does marriage make you happier? Is divorce as common as we think? The discussion then moves on to how the institution of marriage is perceived these days, and to what degree it has outlived its original purpose.

We begin by hearing the voices of people all around the country, talking about why they got married or want to. As you might imagine, their reasoning runs from pure romance (love!) to hardcore pragmatic (a visa, a pregnancy, to conform).

Stephen Dubner spends a lot of time talking with Justin Wolfers, an economist at the University of Michigan and the Brookings Institution. Along with his partner/co-economist Betsey Stevenson, Wolfers has done significant research on marriage, divorce, and family. He explains one dramatic change to marriage over the past half-century — from a factory-style model of “production complementarities,” where the mister went off to work and the missus ran the household, to something very different:

WOLFERS: We’ve moved to what economists would call consumption complementarities. We have more time, more money, and so you want to spend it with someone that you’ll enjoy. So, similar interests and passions. We call this the model of hedonic marriage. But really it’s a lot more familiar than that. This is just economists giving a jargon name to love. So you want someone who’s actually remarkably similar to you or has similar passions that you do. So it fundamentally changes who marries who.

But this new model hasn’t just changed the way marriage looks; it has also changed the numbers. In 1960, two-thirds of all Americans aged 15 and older were married. By 1990, that number had fallen to 58.7 percent. Now? It’s dropped to around 50 percent. Harvard economist Claudia Goldin, who has done extensive research on women’s career and family attainments, tells us what accounts for this drop:

GOLDIN: In the U.S., one group of individuals who eventually marry, marry late. And one group is not marrying — the lower-educated, lower-income Americans are not marrying for lots of different reasons. So I wouldn’t say that marriage is still the institution that it once was.

So if marriage isn’t the institution it once was – what does that mean? How does this affect the rest of society? And if the old model of marriage is less attractive, how about a new model? Those are some of the question we’ll try to answer on next week’s episode, Part 2 of “Why Marry?”

Apologies, but I need to enter a more upbeat note from the Economists today:
http://www.huffingtonpost.com/dr-rebekka-grun/10-things-single-people-a_b_4789635.html

Happy Valentine's everyone, with much love to all singles out there!

It all comes down to one thing: "If you like it then you should have put a ring on it." Fellows, if you want to lock down the a great girl, you have to get serious about her. You may be having fan picking up college girls at bars, but those girls don't want to get with overweight 50 year olds.

And it's even more important the other way.

You never mentioned religion. I am a proud Roman Catholic and my religion teaches that you marry and stay married. Now people still get devorced but many don't because of their faith, whatever it is you choose to believe in. Doesn't faith add into the equation on why people get married, devorced or stay together? I think it must somewhere. I married my husband because I loved him, but if I thought of my marriage as a disposable item, I might not still be married, but because of our faith we worked on our problems and are still married, and better off in the long run. Oh, and we do have chieldren to think about too. Marriage isn't just between me and my husband, but it's also a sacred right between us and God. Doesn't that make a difference in the data?

Marriage rate in US is down. Several studies in the US seem to show that men in general are opting out. The rate of women who say they want to get married is rising. At the same time the rate of men wanting to get married is decreasing. Men are reacting to the real economic reality. If they get married and have children then you can get divorced. Women far more often initiate divorce. When they get divorced women can get 1/2 his stuff, his children, and he has to pay going forward.

Men have adapted. They are not going to college as much, they are taking lower paying jobs and working less. They are choosing to cohabitate and have children out of wedlock. The podcast says lower income people are not marrying. By living together and making less than his partner, a man can have all the benefits of marriage without the pitfalls.

Studies also show that men who cohabitate get more sex, their partners gain less weight, they keep and associate with more of their friends, and get to keep more of their stuff in the home, rather than be relegated to the basement or garage.

Today colleges are 55% women, 45% men and the gap is growing. The workforce is about the same with more women entering than men. Why are men choosing not to go? One there is no reason. The idea that if I get a degree, work hard, earn money, then I will be able to support my family is gone. There is very little guarantee. In fact, economically it can work against you.

Surveys show that about 56 % of men don't really care about the changes. About 26% don't like them. The rest have no opinion. However no one is counting the % not entering or leaving the workforce. How do they feel. It's like saying Lincoln was a beloved president if you don't count the states that seceded.

The reasons for working and marrying are disappearing. Men are opting out. All they need is enough money to buy the things they want and support themselves.

You often hear the statistic married people get more sex, or are happier compared to singles. They usually leave out cohabiting couples, or group them in with singles that pull down the data.

So people who have higher degrees marry. Did they get the higher degree because they wanted to marry? The divorce rate is down. Well of course. People who used to think they needed to get married to have a family and kids are choosing not to. People who earn less don't marry? Did men earn less on purpose and avoid marriage on purpose?

Of course marriage on average is not worth it for men. That's why the decline. But, if you do get married, take the risk, and it works, there is no question you are happy and live longer.

Sorry, did my dice math wrong. Moderator you can ditch that one.

Absolutely fascinating! I propose an open ended contract, 5yr renewable marriage license that gets revisited at the time of renewing with quality assessments guided by a counselor. If kids have been added to the equation then the pressure points have surfaced and it's so important to know that 1) you are not locked in - people can get neurotic if they feel trapped, and 2) just knowing issues, grievances, and accomplishments will be visited and revisited will take a huge amount of pressure off. There is a lot of toxicity in having to figure it out RIGHT NOW!

I also am opting for the institution of marriage to stay intact as it serves many benefits, as mentioned in previous replies, yet modified to accept the truth that as social, interdependent, curious, free-thinking, loving animals, monogamy has no place. It should be socially permissible to share our lives with people who enrich, value, and celebrate ourselves in what ever capacity is desired at each moment.

Yeah, it's a great idea. Make it easier for parents to wiggle out of having to be "locked in" to caring for their kids. It would be a shame if parents had to "get neurotic" or "feel trapped". I mean, the kids'll be fine, but will nobody think of the poor helpless adults?

And yeah, monogamy, who needs it. It's not the 1950s anymore, am I right? We've practically evolved into a new species by now! Our basic impulses and instincts have completely changed.

Besides, kids certainly don't seem to do any better or worse whether they have one parent or three, or even six in quick succession. But there I go talking about the kids again when it's the "free-thinking, animal-loving" adults whose precious feelings and identities we need to be guarding. Allowing polyamory definitely would never lead to mostly polygyny in practice, but even if it did who cares? Polygyny doesn't have any negative externalities that anyone knows about or could point to.

Marriage is the pledge of a man and a woman to love each other exclusively, for the rest of their lives, with an openness to children. It is so beautiful and important a commitment, to them and to their children and to society, that it is a sacrament in the Church. It is the only form of love that is in keeping with the dignity of the human person. Within such a commitment the two become one flesh, and their children are walking and talking embodiments of the love between the two spouses. It is very beautiful.

Everybody these days is trying to sound like the smartest person in the room and trying to dismiss marriage as an institution that as intended to be a business transaction to unite families and protect wealth. If that's true, how does it explain how the one thing that can most destroy or fulfill a person emotionally is their romantic relationship? I don't think that people get that depressed and emotional merely over losing tax benefits.

It's like that old lie about "marriage used to be just a financial transaction where the woman became the man's property."

So the dowry was, what, a negative price on that property?

Up until the 20th century, a VAST majority of the world's population were basically peasants. Yet, most men eventually married and had kids. If wives were property, how could all those men afford it?