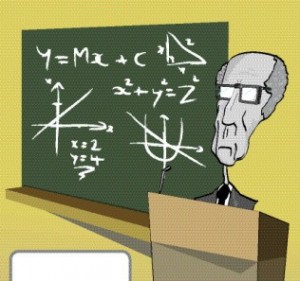 The Way We Teach Math, Sciences, and Languages Is Wrong

A few years after I learned German, I got the chance to learn French. That experience gave me lots of ideas for why our teaching of many subjects, especially science and mathematics, is so unsuccessful---and for how we can improve our learning.

I studied French in school for five years. However, when I went to France after college, I could barely buy a train ticket. The impetus to try again came a few years later, in the summer of 1993. Our whole family was going to spend two months in Lyon while my father took a sabbatical. The rest of us enrolled in a four-week language course at the Alliance Française.

While still in America, to get more benefit from the language course, I started relearning French. On the recommendation of a friend who is a linguist and mathematician, I got the self-study French course made by Assimil entitled Le Nouveau Français sans Peine (New French With Ease). (Many other self-study courses should also work well. I have not tried them, so I do not have the knowledge to draw out lessons for learning other subjects, which is my main interest here. But to learn about language programs, I recommend the excellent "How to learn any language" site.)

I did one French lesson daily starting from Lesson 1. I read a short, idiomatic dialogue out loud using the pronunciation key, then listened to it on the tape, repeating it sentence by sentence. The lesson finished with 2 minutes of fill-in-the-word exercises using the vocabulary from the dialogue. Each lesson took about 30 minutes. After three months of this preparation, when I landed in France I could converse with random French people on the train.

I am fascinated by how we can improve our thinking and problem solving and enjoy learning about and from masters of those arts. My interest was therefore caught by the advice on thinking given in a review of Quantum Man: Richard Feynman’s Life in Science. The reviewer, George Johnson, writes:

This triumph came early in his [Feynman’s] career. His later thinking (about solid-state physics, for example, or quantum cosmology) was just as original. Maybe sometimes too original, Krauss suggests. Science usually proceeds by building on what came before. The maverick in Feynman kept him from accepting even the most established ideas until he had torn them apart and reassembled the pieces. That led to a deeper understanding, but his time might have been better spent at the cutting edge…“He continued to push physics forward as few modern scientists have,” Krauss [the biographer] writes, “but he tended to lead from the rear or, at best, from a side flank.”

When Estimating Is Dangerous

A recent article in The New York Times offers a worrying application of street-fighting reasoning methods. The article describes the deterioration of the Lake Isabella Dam in California. This dam, the article reports, is one of 4,400 considered "susceptible to failure" (out of the 85,000 dams in the country). I'll pass over lightly the statement early in the article that the repair costs would be "billions of dollars," and note only that this figure seems like a massive underestimate.

Articles on the health-care industry are a fertile source of large numbers and, sometimes, large errors. It is estimated that nationally 300,000 women a year may be getting unnecessary surgery at a cost of "hundreds of millions of dollars." I was happy to believe the figure of 300,000 women a year. However, the cost set off my number-sense alarm.

Surely You Must Be Joking, Mr. Mahajan! The "Street-Fighting Mathematician" Answers Your Questions

Bring Your Questions for the Street-Fighting Mathematician

As Levitt once noted, getting a paper published in an academic journal is an often comically belabored process, and of course it's even worse when the paper is rejected.

| For admirers of Indexed, we bring you: New Math. On this site, Craig Damrauer offers up one new formula each Monday to describe our world. In case you were wondering: Carjacking = Can I borrow your car? – No, you can’t. [%comments]

A Lottery for People Who Are Good at Math

As investment schemes, state lotteries are about as sound as a Bernard Madoff venture. But at least one lottery might be worth it -- if you do the math.