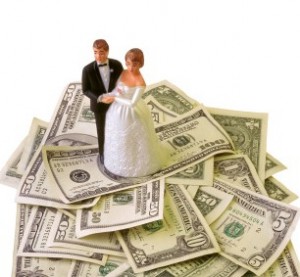 Getting Married? Then Get Ready for Price Discrimination

A reader named Elliot Millican writes in to say:

At one point in SuperFreakonomics you mentioned a particular brand of hair clippers that are offered for humans and for pets. You noted that the human clippers carried a higher price even though they appeared almost identical. You went on to say that the pricing scheme is a simple result of the consumer's willingness to pay more for their clippers than they would their dog's. [Yes indeed: this is known as price discrimination.]

These hair clippers reminded me of something I experienced when my wife and I were engaged (8 years ago). Let me quickly give the background: due to limited wedding budget, we had our wedding at church and a reception at the church with cake, punch, and light food. This allowed us to invite as many people as we wanted because the church was free and the cake/food prices weren't terribly expensive. But we had a second reception just for family and wedding party at a hotel (for about 60 people). This second reception was more like your traditional wedding reception... open bar, sit-down dinner, and a DJ. In short, it was expensive, but affordable with only a fraction of the guest list.

What's Really Going on at the Arcade

A student described her summer job at an arcade. In the "crane" game you win prizes by manipulating a claw to grab stuffed animals or basketballs, but the arcade owner can and does manipulate the odds of winning.

Do ATMs in Japan price discriminate on evenings and weekends? Or are you paying extra to ensure that there's cash in the machine?

My son is renting a car in December. He'll drive it for two days in Orlando, then he'll drive to South Florida for an eight-day stay. With the drop-off charge, the price is $900. But if he drops the car off in South Florida when he arrives and rents a new one from the same company, the total price is only $500. He values his time spent dropping off the car at less than $400, so he'll do it.

How Common Are Women's Shirts?

Why does it cost more to launder women's shirts?

Yet another airline pricing puzzle.

Discrimination Against the Thin

A magnificent dinner, but once again I feel discriminated against.

How Much Is Your iPhone App?

Is there price discrimination among iPhone apps that translate between languages?