Beauty Pays is Out! Bring Your Questions for Dan Hamermesh 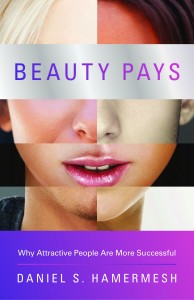 Beauty Pays is out!! (Princeton University Press, 2011, available from the Press, or either hardbound or Kindle version). Its central point is that beauty affects outcomes in markets because it is scarce.  It details how these effects function, how large they are, and what they imply about a wide array of markets.

It includes relevant jokes, songs, etc., lots of pictures but no graphs. Despite a “chatty” tone the discussion of beauty illustrates ideas comprising almost half of an introductory micro course.

It raises a wide array of issues and questions. I’m happy to answer any questions that Freakonomics readers might have, so please ask away in the comments section below!

Here’s the table of contents:

Part I. Background to Beauty

Chapter 1. The Economics of Beauty

Chapter 2. In the Eye of the Beholder
Definitions of Beauty
Why Do Beauty Standards Matter?
How Do We Measure Human Beauty?
Do Observers Agree on Beauty?
Does Beauty Differ by Gender, Race or Age? What Makes You Beautiful?
Can We Become More Beautiful?
The Stage is Set

Part II. Beauty on the Job: What and Why

Chapter 5. Beauty and the Employer
The Puzzles
Do Good-Looking Employees Raise Sales?
How Does Beauty Affect Profits?
How Can Companies Pay for Beauty and Survive?
Do Companies with Better-Looking CEOs Perform Better?
Beauty Helps Companies—Probably

Part IV, Chapter 9. Prospects for the Looks-Challenged
The Beauty Conundrum
Are Beautiful People Happier?
What Will Be Beautiful? What Should Be?
What Can Society Do?
What Can You Do If You’re Bad-Looking?

Something I've always wondered: Do attractive people show up later to meetings / events / interviews etc.? That is my intuition but has anyone ever studied it?

Well, the only bit I need to read is chapter 9, "Prospects for the Looks-Challenged". :)

(Just ordered your book, so all I've read is what's available in the Amazon preview.)

On pp 35-36, you say that we're basically stuck with the hand nature has dealt us, even with cosmetics, surgery, etc. Is this only in regards to facial beauty? It would seem that from the neck down, there is much more room for improvement (or to let yourself go).

How can we (individually and corporately) resist this economic force, and how can we best train our children to resist it?

Because I am on the distant end of the beauty spectrum--the low end, alas!--I think it likely that jealousy, self-loathing, and perhaps bitterness at my lot, has caused me to play hardball when beautiful people show up.

A beautiful woman is my waitress? I redouble my guard so that she can't get a bigger tip out of me just because she's good looking. (I mean, really, guys, do we think that a 25% tip will cause her to fall into our arms, beg to bear our children, and the such??? Maybe us guys aren't just not good looking...maybe were stupid, as well.)

Silly men will always have a weak spot for a "pretty little thing." No wonder many of the people who do well in real estate sales are beautiful women. I'm a little silly myself, I'm afraid. I married a girl 13 years my junior. In retrospect, I think it was somehow self-affirming for me, a very below-average looking guy, to parade around a cute little 21-year-old.

In a way, just as women USED to have to work twice as hard to get as much recognition as men, the pretty ones have rebalanced the playing field by having to work less to get what they want.

MY QUESTION: I don't want to know how to even the playing field. I want to know how to UTTERLY DEFEAT pretty people--and to do it without having to work harder or be smarter. I know the answer probably has to do with having photos of the boss in a compromising position, but maybe you have another path to success.

From looking at Dubner's and Levitt's pictures, I know they want to know this too!

I'm curious about self-awareness of beauty. We're often aware of our competency in many skills and physical traits. Someone who is tall is tall; a great typist knows by their high WPM. There is of ten said to be a type of person who is beautiful "and knows it." Are these people more apt to leverage the advantages beauty brings, or is it an inherent value booster in all who have it? Two equivalent fast typists in the same job would hypothetically perform the same. What about two equivalently attractive people, but one is less aware of their relative attractiveness?

Us ugly guys could exploit the "American Idol Loophole"--you know, where grossly untalented people think they can really sing? Maybe there are incredibly beautiful women who think they look terrible...and we could make their day by marrying them despite their terrible "shortcoming." We'd be heroes in their eyes!

Have you noticed any ways that beauty is a double edged sword?

Bill James had a good statement on this topic in "Moneyball" by Michael Lewis, where he equates a potential blessing as a possible bane: (paraphrased) "A pitcher's velocity on his fastball, is like looks on a girl. It matters but its not everything". I took this to mean that while you maybe gifted in one area, in this case velocity/attractiveness, it may lead to short comings elsewhere - pitcher's accuracy or a girl's personality.

Does Hamermesh have to give the Freak blog a cut of sales to have this book 'advertisement' appear at the top of the blog for the day (tell me it isn't longer than a day!) i.e. Featured Post?

Maybe there is normally a featured post that stays at the top for a day. This is the first one that I have noticed.

The history of what defines beauty would be interesting to know, as well as the gender gap in good looks. Men can look plain and not be criticized, while plain women are told to get makeovers.

"There are no ugly women, only lazy ones."

Maybe plain men aren't told to get makeovers because no one thinks there's any hope for them anyways.

I hope i am not too late in commenting
Here in the Uk, this book is not available yet, I've only been able to read whats been posted around the internet by the author.

I want to talk about a very controversial evolutionary psychologist who has published a blog post called "Beautiful people are more intelligent"
Here are the links to two of his articles. I'll some up his assertions.
http://www.psychologytoday.com/blog/the-scientific-fundamentalist/200903/beautiful-people-are-more-intelligent-i
http://www.psychologytoday.com/blog/the-scientific-fundamentalist/200904/beautiful-people-are-more-intelligent-ii

I notice in an article written by the author, he states that the income gap for men differing in physical attractiveness is wider than with women. This associates well with the above find.

Could it be that attractive people make more money partially because of their good looks but more so because they are more intelligent?

I forgot to add I have seen studies claiming that more attractive men were more likely to be hired, but the opposite was true of women, possibly because the admin and recruitment departments of many firms have a higher proportion of female staff who may be jealous at another womans beauty. Could this also add to the disparity in the effect on income of beauty by gender?

Sorry if you've already answered this in detail in your book.

but what happens when it seems everybody's TOO

let me finish..
what happens when it seems everybody's TOO good looking
http://theregjoe.blogspot.com/2010/10/everybody-is-just-too-good-looking.html

Attractive people may be more successful, but hot chicks are also dumber, and here I explain WHY: http://andreasmoser.wordpress.com/2011/04/07/why-hot-girls-are-dumb/

Does your data set include other countries or does it stay in the United States, Thanks!

Does beauty matter more than race?