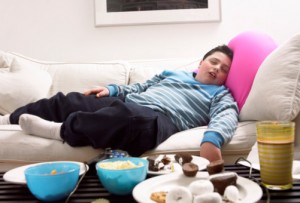 A new study out of Australia shows that children who go to sleep early and wake up early are less likely to be obese. The results, published in the Oct. 1 issue of the journal Sleep, indicate that it’s not so much the amount of sleep kids get, but the times at which they get it that has the biggest impact on their weight.

The study recorded the bedtimes and wake times of 2,200 Australian children, ages 9 to 16, and compared their weights and uses of free time over four days. Though they got virtually the same amount of sleep, children who went to bed late and got up late were 1.5 times more likely to become obese than those who went to bed early and got up early. According to the study, the difference is driven by the sedentary nature of late-night activity, as late-nighters were also nearly twice as likely to be physically inactive, and 2.9 times more likely to sit in front of the TV and computer or play video games for more hours. On average, they watched TV, played video games or were online 48 minutes longer each day than their early-bed/early riser counterparts.

Is this still the Freakonomics blog? Where's the rigor?

I am going to try to respond to the implied question here with a possible answer. In the early morning there is far less to do involving a screen than there is late at night. Morning TV is lame, friends are not yet online and with the imposing deadline of school one can't really dilly-dally in any event. However, late at night children have nothing but screen related distractions and the lack of sunlight means there is no competing physical activity to get in the way. Shifting one's sleep schedule earlier tends to replace time spent being sedentary with time spent being active.

This reeks of confusing correlation with causation. The conclusion in the abstract of the study is careful to say "Late bedtimes and late wake up times are *associated* with an unfavorable activity and weight status profile..." The post here says "... the times at which they get it [sleep] that has the biggest *impact* on their weight."

Surely the dominant factor here is that the kids who sleep & wake up late are also doing other things that cause to better health. One can think of lots of plausible reasons for why this may be the case. Perhaps sleep times itself has some causal effect on obesity, but I would guess it is 2nd order to the other factors, and moreover I doubt that the study teases it out convincingly (I didn't read the article though, I confess).

Alternatively, parents who put their kids to bed early are more likely to engage in other actions that result in healthy kids. When did we stop understanding that correlation is not causation?

Parents who put their children to bed earlier are demonstrating the ability to say "No" to their children and also control what they do. Kids don't have jobs and don't have incomes. The only reason that they have the junk food to cram down their gullets is because their parents buy it for them. If a parent can say no and not give into all the whining to stay up late they can do the same for food.

What a strange way to report results. The correlation may be there, but the causation still seems to be basic inactivity, yet they make a big deal about the sleep times? What's next, some journal called Breakfast that prints a similar paper saying that eating their first meal before 9am "keeps kids slimmer"?

Did they try swapping bedtimes, there doesn't appear to be a control group...

Totally agree. Kids go to bed early when they're tired from enough physical activity the day before. Going to be earlier causes the waking up earlier. And if you want to encourage physical activity for kids, _sell_ earlier bedtimes as a benefit to parents

I agree with everyone else here. There's no real evidence shown here that more sleep actually leads to less obesity. My first thought upon reading this was that parents who tend to enforce stricter bedtimes for kids are also probably the higher-income, higher-educated parents who are generally more involved in their kids lives, and also enforce healthy eating habits and regular exercise (and practice it themselves.) Maybe they did control for this in the study; it's just not shown here.

Where is the causal relationship?

From my own life, I see a lot of friends who let their kids stay up late, also tend to feed their kids a lot of highly processed junk food.

"Late-bed/late-risers tended to have few siblings, live in major cities, come from lower-income households and have a part-time job."

I would expect these factors to have a larger impact on obesity than actual bedtime. I wonder if the obesity rates are higher for late bedtime adults as well.

This seems like a question that could be answered more clearly with better identification, maybe the US Air Force Academy data could help, a la Carrell, Maghakian, and West (2011): http://www.aeaweb.org/articles.php?doi=10.1257/pol.3.3.62

But where is the control? What is the cause and what the effect? Rather than bed- and waking-times driving weight and metabolism, perhaps it is the other way around. Perhaps people who are naturally inclined to be slimmer because of metabolic and other genetic factors also happen naturally to be early risers and early sleepers. It annoys me that most writing about science fails to question or to explain whether any experimental controls were used (in the case of experiments) or whether the role of causality was properly investigated. Can you expand upon this study and are you persuaded that the early bedtime actually causes the higher activity levels and lower body weight? Thanks!

The fact that the kids can sleep early at all may be proportional to their dietary intake or lack of for certain kinds of "foods" e.g. sugary caffeinated beverages. Conjecture on my part, but it would point to activities that are focused on short bursts of energy that stimulate that part of our brain.n