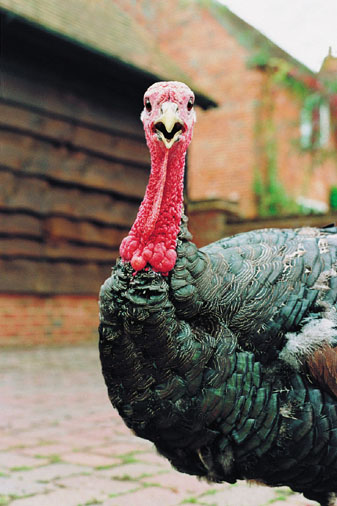 Our latest Freakonomics Radio on Marketplace podcast, “Unnatural Turkeys,” looks at the origins of all those 40 million turkeys that Americans are going to eat this Thanksgiving. We’ve talked about why this happens; now we bring you the details of how it happens. USDA researcher Julie Long walks us through the process of what a day inseminating turkeys looks like. It’s an act that is almost unchanged since turkey insemination became the industry standard in the 1960s.

When you get down to it, artificially inseminating a turkey is a pretty labor-intensive, hands-on process.

First, you have to get the “contribution” (semen) from the male. That means that each breeder male, which will weigh between 50 and 70 pounds, gets picked up and placed on the handler’s lap.Then another person helps get him ready to make his contribution to the artificial insemination process. Once they get enough “material” from the males, they have to get it over to the hen barn right away, because it will only be viable for at most six hours. And that’s even more labor-intensive.

For a hen house that has 2,000 birds in it, you’ll have a crew of four or five people who will inseminate all of those birds. And they can actually do it fairly quickly.

On that crew, you’re going to have the guy who’s the actual inseminator. Then you’re going to have possibly two other folks who will be the handlers, who pick the birds up and ‘vent’ them – that is, lift up the tail feathers so you can get access to inseminate the hen. And then you’re probably going to have another two guys who are out on the floor corralling the hens, getting them to a spot where they can be picked up, and keeping the hens who have been inseminated separate. And you’ll have to do all of this about once a week.

The best job on that crew really depends on your preference. Everybody is going to get exposed to feathers and dust. But the guy who is sitting in the chair and doing the inseminating has the possibility of some crap coming his way, literally. Because when you lift the tail feathers, if the hen decides to defecate, well, it’s coming his direction. So that would not be a fun job. But then again, the guys who have to handle the birds, they’ve got to have the muscle to pick the birds up. And the guys corralling the birds, they get more dust than the others, because they’re out walking around on the floor with the hens.

"another person helps get him ready to make his contribution"

Not as sexy as I thought .

Add this to a list of jobs that make me really happy about my job.

I'm a catcher on a a.I crew.......... we chase the turkeys up a shoot with flags. And then The Catcher grabs the turkeys legs and put the turkey in to a chair where the inseminator then takes a straw with semen in the straw and injects the semen into the event and then the bird is released. There is a lot of controversy over what I do a lot of people say the people who are employed in this industry I just got done reading another website where they referred to the people who worked in the turkey industry as being criminals and junkies. I can assure you that I am NOT a criminal I'm not a junkie. I am a father of four kids and all I'm doing is making a living.and for the people who think that artificial insemination is bad well you're wrong. If we did not artificially inseminate turkeys there would not be turkeys you might think that there are plenty of wild turkeys but if we busted into that it would only be a matter of time before there would be no wild turkeys.