Bring Your Questions for FiveThirtyEight Blogger Nate Silver, Author of The Signal and the Noise 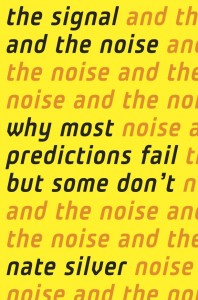 Now Silver has written his first book, The Signal and the Noise: Why So Many Predictions Fail — But Some Don’t. I have only read chunks so far but can already recommend it. (I would like to think his research included listening to our radio hour “The Folly of Prediction,” but I have no idea.)

A section of Signal about weather prediction was recently excerpted in the Times Magazine. Relatedly, his chapter called “A Climate of Healthy Skepticism” has already been attacked by the climate scientist Michael Mann. Given the stakes, emotions, and general unpredictability that surround climate change, I am guessing Silver will collect a few more such darts. (Yeah, we’ve been there.)

In the meantime, he has agreed to field questions about his new book from Freakonomics readers. So feel free to post your questions in the comments section below, and we’ll post his replies in short course. Here, to get you started, is the book’s table of contents:

1. A CATASTROPHIC FAILURE OF PREDICTION

2. ARE YOU SMARTER THAN A TELEVISION PUNDIT?

4. FOR YEARS YOU’VE BEEN TELLING US THAT RAIN IS GREEN

6. HOW TO DROWN IN THREE FEET OF WATER

9. RAGE AGAINST THE MACHINES

12. A CLIMATE OF HEALTHY SKEPTICISM

Do you see a media bias toward (presidential) polls that demonstrate the narrowest results? (in other words, would an EIC/ME prefer to publish a 45-45 poll over a 48-42 poll)?

The cynic in me argues that keeping the rhetorical election close will attract more readers/viewers.

There are so many polls produced during the two-year-plus American presidential election cycle. Do the polls really help educate voters or are they mainly an easy prop for media and pundits to create a short-term news burst?

How would you compare the accuracy of polls vs. prediction markets for American elections? Why don't you include the latter in your estimates on FiveThirtyEight?

Which party would win a baseball game with only its national-level politicians as players?

What's your response to the "attacks" by Michael Mann on your climate science chapter?

I too would be interested in seeing this response, and also in a discussion of how you (and these Freakonomics guys) reconcile their claims of unpredictability with e.g. NASA's ability to predict the paths of space probes to accuracies of better than one part in 100 million (Curiousity rover)?

Orbital mechanics problems aren't predictions; they're (not particularly complicated) math problems that assume compliance with known laws of physics. Determining the path of a spacecraft after launch is not analogous to predicting the weather.

The argument for aggregation is that if you ask individuals to estimate something, the average of their results is more accurate than any one individual predictor. This has led to successful poll based models.

But polls are not completely independent variables like estimates. Do you think its possible that we will see an election, where aggregation will build in some methodology bias and lead to vastly inaccurate predictions?

In the primaries, my preferred candidates never seem to win, but as I talk to people in my circle, they say they like my candidate best also but feel compelled to vote for one of the front-runners so as not to waste their vote. How would (did?) elections fare without polling? How do published polling results bias future polls? Can anything be done about it?

If the public had no knowledge of poll results would the election outcome be any different? Is seeing "your guy" falling behind a motivation to vote? Perhaps seeing him too far behind causes people to stay home since their vote won't matter?

What industries do you see as next to revolutionized by data? I keep hearing that PR is particularly vulnerable, in the emperor-has-no-clothes sense.

Who should I bet on to win the world series?

do u vote?- and if so, does it produce cognitive dissonance if ur stats lead u to believe that ur vote wont change the outcome?

I have the book on order, can't wait for the 27th. How about some about a fantasy baseball question? In a draft league, do you think it is best to use a good prediction model (Pecota) for example and let it stand so to speak. I mean of course, just line them up top to bottom and only use minor manipulations ( something like inside info on an injury). The question implies the use of intuition comapred to the model. Daniel Kahneman refers to this in his book "thinking slow and fast". The notion of models outperforming intuition. He also talks about checklists as being useful, if applied in a disciplined manner. What I'm getting at it is, a baseline Pecota type projection, followed up by a checklist of the top 5-6 things that move a player off his projection. Do you think this could help identify the Jose Bautista, Cliff Lee errors earlier. Or is this just noise?

Nate, could you let readers here know what statistical analysis package you use? Secondly, have any firms or collaborators asked you to evaluate any packages that they have made?

It appears to me that prediction markets such as Intrade are continuing to grow, so I'm assuming that the insight that one can get from them is changing as more people use them. What's your opinion of the usefulness of prediction markets and how has that changed over the past few years? How do you feel they will change moving forward?

What's your take on the public equity markets--are they efficient or nearly-efficient? How much predictive power does a change in a company's stock price have on future earnings annoucement?

Pardon me if you mind me asking, but what do you do with your personal investments? Do you buy any individual stock names, or do you stick with indexing? Overall, how do you apply your work in predictions to your personal finances? To me, the prices of securities have some predictive power and I'd love to hear your take on how you think about this and apply it to yourself.

For anyone interested in the subject of predictions, I'd recommend Future Babble by Dan Gardner. I haven't read Silver's book, but I would imagine that it would be similar to Gardner's.

Has Silver read Future Babble? Has anyone at Freakonomics read it?

Does Silver's book contain anything about Philip Tetlock?