The Downside of More Miles Per Gallon (Ep. 115) 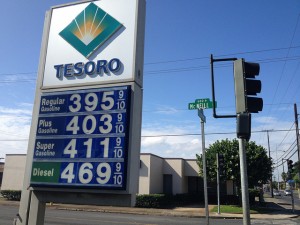 Our latest Freakonomics Radio on Marketplace podcast is called “The Downside of More Miles Per Gallon.” (You can download/subscribe at iTunes, get the RSS feed, listen via the media player above, or read the transcript here.)

The gist: the Federal gas tax is a primary source of infrastructure funding but, politically, it has proven a hard tax to increase. Furthermore, because the tax is a fixed amount (18.4 cents per gallon) rather than a percentage, gas-tax revenues don’t rise even when gas prices do — as has been happening lately.

Even worse, as modern cars travel further on a gallon of gas (good news, right?), they contribute even less money for the roads they travel. And cars are going to get even more fuel-efficient.

So what’s to be done? Some politicians want to get rid of gas taxes in favor of an increased sales tax — which, Eric Morris argues, is a bad idea, since it shifts the burden to non-drivers.

A more promising idea, under exploration in many areas, is to switch to a tax based on how many miles you drive.

Then there’s the option of fining traffic offenders based not on how badly they were driving but on how much money they earn. If nothing else, this might be a great jobs program, since high earners would have a very strong incentive to hire lots of chauffeurs.

Until security and privacy concerns are thoroughly and adequately addressed, I have zero desire to have the government track where I go to calculate how many miles I drive. The potential for abuse is staggering.

Instead they should just tie the sur-tax to mileage tracked during smog checks for registration. The infrastructure for such a plan already exists. But it make too much sense and is too simple, so instead they will come up with some dumb technological solution that needs to be installed in the car instead

Population was 250mil in 1990, it is now 315mil
Roards are more crowded now
Mpg just an excuse govt using to get more tax money??

DUbner and Leavitt not exactly known to be pro-government . Roads must be paid for if we want them to stay in good condition.

I'd really like to see some supporting evidence for your claim that raising gas taxes is significantly harder than raising any other kind of tax.

Also, why not discuss the problems inherent in a per-mile tax? First, that road wear goes up as the 4th power of axle weight, and road occupancy depends on the size of the vehicle, so taxing per mile would put a disproportionate burden on people driving small cars (or motorcycles). Second, that it would be ridiculously easy to game any distance-measuring system, in ways ranging from simply disconnecting the odometer to spoofing GPS signals.

PS: No, we haven't all gotten used to carrying around a GPS. And if it would save money, I bet a lot of folks would start figuring out how to disable smart phone GPS systems, too.

You are right on, James, on several key points. First, a 2011 survey by the Rahall Institute showed that a substantial majority favored a gas tax increase as long as the added funds were used exclusively for transportation. Find another tax that has that degree of support.

Second, there are indeed axle-weight issues, vehicle-width issues, and highway capacity issues that track better, to some degree at least, with fuel consumption than they do with miles of travel. The most compelling reason to favor a fuel tax over a VMT tax, however, follows from the extensive externalities associate with fossil-fuel-powered transportation vehicles. Never mind the money we spend on protecting petroleum sources, or ignoring environmental and safety effects. Can anyone say climate change?

In the short term (20 to 30 years), fuel tax is an ideal source of revenue for transportation funding for all modes. We have not begun to tap its potential. When the ratio of electric-to-petroleum vehicles approaches 3-to-1 or 4-to-1 , we may have to revisit this philosophy, For now, though, when the ratio is 0.0001-to-1, or something like that, replacing the fuel tax is the height of folly.

Couldn't you avoid the big-brother component by just checking the odometer when you register your car and then pay a tax based on the odometer increase since the last year?

This makes the most sense, just tie the sur-tax to mileage tracked during smog checks for registration. The infrastructure for such a plan already exists But it make too much sense and is too simple, so instead they will come up with some dumb technological solution that needs to be installed in the car instead.

But you have to realize that more cars on the road = more wear & tear on the roads. Yes, more cars means more revenue, but it also means higher repair costs for those roads.

What our government needs is to pull it's head out of it's ass & stop pissing away money. While the politicians are on vacation they should allow the middle class to come up with a balanced budget, since many in the middle class know what it's actually like to live within a budget.

Texas has long priced vehicle licensing fees on the basis of weight. That addresses several of the issues raised.

I invite Mr. Dubner and readers of this blog to follow the developments in Oregon where a mileage-based tax is being tested using non-location-based (i.e., non-GPS) technology. This is a critical point of which every journalist in the country should take note: mileage-based taxes DO NOT require GPS or a "government tracking device" of any kind. There are many methods of reporting mileage (yes, GPS is one of them), but there are non-GPS technologies as well as "manual" systems (e.g., annual odometers checks). The concept of mileage taxation is fair, understandable, and sensible. We finally now are seeing implementation approaches that address privacy concerns and are inexpensive to administer.

My solution to funding the federal/state government for upkeep of roads etc:

Yearly car ownership tax based on number of cars and the WEIGHT of the car. Heavy cars break down roads faster. Lighter cars do not. Regards, Sharyn W.

I live in Florida and down here the highways are fantastic. The reason being is they charge tolls and if you drive allot on the highway you pay more in tolls and therefore contribute more to the maintenance of the roads. They even have something called EPASS which automates the process where you do not actually have to stop and pay and you just refill your card with money and as you pass through it detects your car and deducts from your account.

Something that always gets me about the VMT tax, and which never seems to be discussed much when this is being discussed in the news: Don't want *want* to encourage people to drive more fuel efficient cars? I mean in the end, isn't it the consumption of gas that we most want to limit? And if the increasing fuel efficiency of cars is really the problem here, which not just "reverse index" the gas tax rate to the average fuel economy 0f the country?

I feel like the only reason this tax has received any traction at all is that it affords politicians a way to raise taxes on vehicle use without speaking the phrase "gas tax" in public, but that in the end it will prove just as unpalatable to the public.

From an economics perspective, it is inferior to a gas tax in every measurable way. It's expensive, controversial, and complicated to collect and it does nothing to incentivize efficiency. And if followed to its logical conclusion it could be assessed equally even against very efficient vehicles, like mopeds, or even bicycles, which wouldn't make any sense at all given how much less space they take up and wear and tear they put on the roads.

I quite agree with Eric Herot. Why focus on a GPS-tracking approach when a simple gas tax does it for you?

The governments' thirst for money is endless, of course - everywhere. I live in northern Europe, and we already have a rather high gas tax when compared to US. Gas price here is 1,70 € per litre (about 8.5 US$/gallon), where the proportion of gas tax and VAT (sales tax) is currently 0,97 €, i.e. 57 % of the price is tax.

This doesn't stop our politicians and ministry officials from planning a GPS-based tracking that knows the location of every car and collects more tax accordingly. They say that gas tax would be cut somewhat, but from experience we can tell that this is not going to happen.

I can't really come up with any other conclusion than this: the motives for proposing GPS tracking are somewhere else. Politicians want more control of the population - what they do, where they move about, how they behave. Economically sensible or not, I think this must be resisted. Besides, I don't quite buy the economical sensibility argument. If you want to reduce CO2 emissions - the primary pretext given - then the gas consumed is the ideal target for tax, because emissions are directly linked to fuel consumption.

Forgot one other motivation, which is important, of course: more and more vehicles are going to use stored electricity as power source. This means the eroding of tax base for gas tax. Of course, it also means that emissions from private traffic will fall. So other good reasons for collecting money will have to be found.

Why not just fund roads from general revenue? Tax is tax is tax. It's all theft by the army at gunpoint, why can't we have a mature adult discourse about the pros and cons of public roads?

And if we need a pigouvian tax to price carbon externialities, lets just call it that and not a transport tax.

There are 2 things we drivers do when we increase the number of miles we drive: 1) change the oil more often; 2) buy new tires. That makes oil, oil filters, and tire sales good candidates for additional tax revenue.

Thank you for the piece on this important subject and the shout out to the great state of Virginia. I agree that there are some benefits to a vehicle miles traveled tax and a gas tax, but you are ignoring the best option: a congestion tax. If you only ask people to pay at times of peak congestion, they will respond and smooth out road demand. You can see good examples in CA and VA.