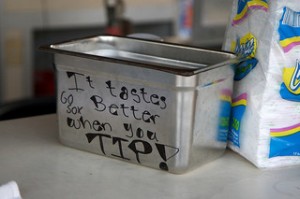 I have a friend with whom I regularly eat out at restaurants and from time to time we disagree on how much to tip.  Traditionally, I have been a hard-wired 20% tipper.  But since studying the racial effects of taxi-cab tipping, I’ve been more attracted to tipping less – sometimes closer to 15%.  This has at times created disagreements between my friend and I on how much to tip.  He always wants to tip 20%.  But when we’ve disagreed, we’ve always resolved the issue by tipping the larger amount.  We always split the bill—including the tip—50/50.

But a few weeks ago, my friend and I were eating dinner and experienced exceptionally bad service.  The server twice put in the wrong order and charged us for items that we had not ordered.  I suggested that we reduce our tip to 10% (I note that while I’m high maintenance in many aspect of my life, I’m not persnickety about restaurant service and the last time I reduced my tip to 10% was probably more than 1000 restaurant meals ago).  My friend agreed that the server had made these errors (and indeed, the sever himself acknowledged that the service was subpar),  Nevertheless, my friend still wanted us to leave a 20% tip.

I proposed something different.  I suggested that we should either leave a 10% or a 100% tip and that I’d let my friend decide which was more appropriate.  I said I’d prefer to leave a 100% tip than a 20% tip, in part to signal to the server that something was out of equilibrium.

Nonetheless, my friend gave in and chose to leave 10%, though he was sufficiently upset with my strategy.

For the rest of the evening, our conversation was a little less comfortable because of my “Why Not?” stunt.  A cautionary tale for Freakonomics nation.  (Much safer to play credit card roulette).

For more on tipping, check out the Freakonomics podcast “Should Tipping Be Banned?“

The correct strategy would have been to inform the manager. Chances are he would have corrected the problem, disciplined the mistake-prone server, and potentially reduced your total bill so you would have paid less and, in turn, if you paid the 20% gratuity on a reduced check, would have meant less money for the server anyway.

Alternatively, realise that you have paid the inflated restaurant price to be served your meal and get over this weird thing the states have about huge tips.

Ian, as someone who earns their living as a server and whose family has two restaurants in Italy, I heartily disagree. The vast majority of servers in the US are paid $2 an hour (courtesy of Congress being lobbied by the NRA in 1991) and this actually LOWERS the price of restaurant meals in the US (in full service restaurants). However in Italy servers are paid a monthly salary with six weeks of paid vacation, tredicesima (an entire extra MONTH of salary at the end of every fiscal year) and get completely covered health care courtesy of the taxes paid by the business owner. So, if we adopted that system that would increase costs way more than any tip you would leave and service standards (on average) would drop (the work there is contract and you can not simply be fired).

Research, people, research...from the peanut gallery, who half the commentators here would likely treat with disdain when I serve you.

And this is why economists tend not to have too many friends....

Another option is to write on your receipt your problems. I've been told that leaving a small tip doesn't automatically get your message across to the server - some might just think you're cheap. If I leave a smaller tip(which is rare) I include a short message about why I did so.

And my husband and I have had the same problem with friends. We almost always tip 20 percent. But if we feel we've received exceptionally bad service, we tip 10 or 15 percent. Our friends have yelled at us about this, even though they admit the service was horrendous.

The correct strategy is to get separate checks. Then you can leave the tip you think is fair, and your friend can do the same.

So someone does a great job and they get 20%, they do a poor job and get 20%. You're not really encouraging the right behaviour are you? Surely you should tell your server at the start of the meal that there's 25% up for grabs if they're fantastic, 15% if they're okay, and nothing if they screw up, or ignore you or are rude. You could even have a little card printed...

Personally I think tipping only makes sense if it's linked to effort, not just doing the job, which is why I can't tip a taxi driver or a barman (unless they actually go out of their way to do something extra).

Why do we tip at all. Its only an excuse for the owner to underpay the waiting staff anyway. Just increase the price of the food and pay a proper wage. And then no need to tip.

Would you tip at the supermarket? theater? No, so why do we do it at a restaurant. no one tips me in my industry whatever the level of customer service.

Why would you take someone who's having a bad day and make the situation worse? These people are not captains of industry, they are Moms, students, and the under employed. Double down on the Prozac and pay the lady 20% and be glad someone with your people skills does not have to work in customer service. I can assure you he or she is aware they screwed up. Your friend knows this, and for the same reason he or she did not tell you, they insisted on the normal tip.

In other words, a Win-Win for you, a Lose-Lose for him. Not really much of a game...

Roger's comment is spot on, but I'd also suggest the following. If it was truly the servers fault then the sending of a message to him needed to be clear (and nothing could be clearer than complaining to the manager). A 100% tip sends one message, specifically that something is out of equilibrium in the very positive direction. That was not the case. A 10% tip does not send a clear message. Are you cheap, or was the service bad? Not clear. A tip of nothing ($0.00) does not send a clear message... perhaps you forgot to tip. A $0.05 tip (or some minimal amount that clearly and unambiguously changes the total) is a very clear message: you know to tip, but the service was terrible.

Service that bad? Leave a quarter just to show you didn't forget and stiff them. Besides, tipping is a guilty American thing. Most other places in the world don't tip or they round up to the nearest 5.

Tipping 15% is shitty. As a college student, and also an Econ major, that is how I pay for school, rent, etc. If you receive good service tip 25%, 20% for normal service, 15% for bad service. 15% for bad service because the server is usually the only one you see so you blame them for your food being wrong. It could have been the kitchen or the manager, out of the server's control. Also many restaurants have servers tip the bartender and the expedite so if you tip poorly it is actually costing the server money to wait on you. Also don't fuck with the people who serve you your food. Publishing a "little card" on how you tip will have everyone spitting in your food and calling you an asshole. I'm sick of economists having a bad name for being stingy elitist assholes who are out of touch with the working man, so please don't feed the stereotype. It's embarrassing.

"Traditionally, I have been a hard-wired 20% tipper. But since studying the racial effects of taxi-cab tipping, I’ve been more attracted to tipping less – sometimes closer to 15%. "

Maybe I'm just dense, but it's not obvious to me how the results of that study would lead you to tip less. Is it because you found that 20% is above average? Or you found that tip amount does not correlate with quality of customer service? Or maybe you want to make sure you under-tip all races equally?

If Client A purchases a $20 plate and Client B purchases a $40 plate, but receive the exact same service for the exact same period of time, and both Clients follow the automatic percentage, there is an imbalance in the waiter's compensation per effort.

I like the idea of leaving an outrageously large or small tip to call attention to the situation (good or bad). Unfortunately, 10% is not outrageously small - although it maybe such for you and your dining companion.

There used to be a custom to throw in 2 pennies to signal exceptionally bad service - that brought out a manager, or a server caught up with us in the parking long and apologized (I've left 2c tip exactly twice, in several years of eating out many times a week).

Being a waitress for 5 years (working full time while taking 5 or 6 college classes at a time) sometimes people have bad days, sometimes the kitchen screws up, etc etc etc. I work 30 hours a week and my paychecks are $12. Putting up with rude jerks all day gets old. And trust be it you're a bad tipper and the next time you come in something goes wrong, I'm not going to feel bad or really care. For my customers that are actually friendly and tip appropriately I always go out of my way for. The most annoying thing is when people talk to me like I'm some scummy idiot or like I'm a dog. Sad thing is I'm probably more educated than they are. People are starving all over the world and you're going to be an ass because your order wasn't perfect the first time? Get over it. If that's your only problem in life you should be grateful.

As for the "customary" 20% tip, how and when did satisfactory service equate to a tip of 18 or 20 percent of the bill? Or 15 percent, for that matter.

Who has determined the steady escalation of a "customary" tip from 10 to 12 to 15 to 18 to 20 percent? Servers and former servers would be my guess. The biggest tippers I know are those who either work or formerly worked as servers. OK, I get that. But why the escalation?