What Do NASCAR Drivers, Glenn Beck, and the Hitmen of the N.F.L. Have in Common? Interviews and musings about danger and safety in the modern world.

As mentioned yesterday, we are launching a podcast, Freakonomics Radio.

In the first episode (subscribe at iTunes; subscribe to this RSS feed; read the transcript; or listen now in the player above), we ask the question: “What Do NASCAR Drivers, Glenn Beck, and the Hitmen of the NFL Have in Common?”

The answer? Each of them shows how risk is becoming a sort of luxury good. It’s a program about safety measures, the Peltzman Effect, and (mis)conceptions about danger (including, yes, fatal shark attacks).

Today’s blog post focuses on the NFL part of the show. Among the people interviewed are Dr. Robert Cantu, an expert in the field of head trauma whose affiliations include the National Operating Committee on Standards for Athletic Equipment and the National Center for Catastrophic Sport Injury Research. In the podcast, he describes what happens to the brain during a violent blow to the head (think Jell-o) and talks about how modern football helmets have led to a significant decline in deaths — you can see the numbers here. The old numbers are sobering: between 1931 and 1965, 348 high-school students died from playing football. There are still 4 or 5 deaths a year from football — though none, notably, in the N.F.L. If there were — well, we’d be hearing a lot more about death by football than we do today.

Not all head trauma leads to death, of course, and Cantu highlights a paradox: helmets built to prevent death may do a worse job of preventing concussions. Much attention has been paid lately to the issue of football concussions — see Alan Schwarz‘s excellent articles, and an OpEd today by Deborah Blum — and we try to get inside the players’ helmets to talk about what happens during a particularly hard hit.

Last week, I interviewed several players who were assembled for the Pro Bowl in South Florida. Among the most fascinating — candid and extremely descriptive — were Quintin Mikell of the Philadelphia Eagles. Here’s an excerpt from the podcast, with Mikell talking about the hardest hit he ever took, what it felt like afterward, and what it would be like to play football without a helmet. 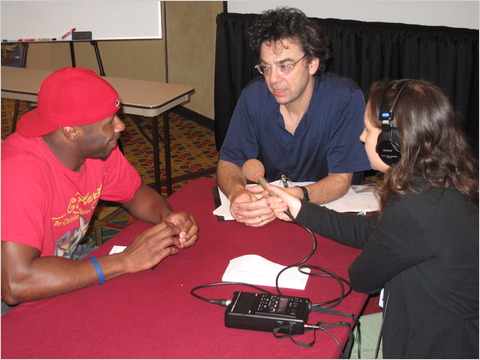 Quintin Mikell, strong safety for the Philadelphia Eagles, one day before playing in the Pro Bowl.

The podcast also features Terence Newman, the very-hard-hitting cornerback of the Dallas Cowboys. Here’s Newman in action, bringing down the Saints’ Marques Colston in a game on Dec. 19, 2009. From the look on Newman’s face, he wishes he could have hit Colston a lot harder. 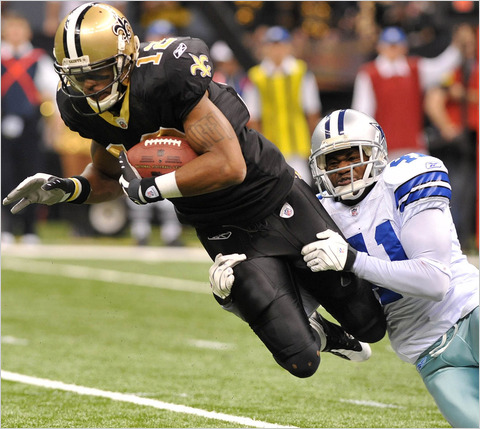 In the podcast, Newman talks about wanting to “de-cleat” receivers; he also discussed the taxonomy of the muscle-bound, including the difference between being “ripped” and “swoll.” I brought my son along on the trip (he’s followed football for quite a while); here is Newman counseling Solomon on how to look a little more “swoll”: 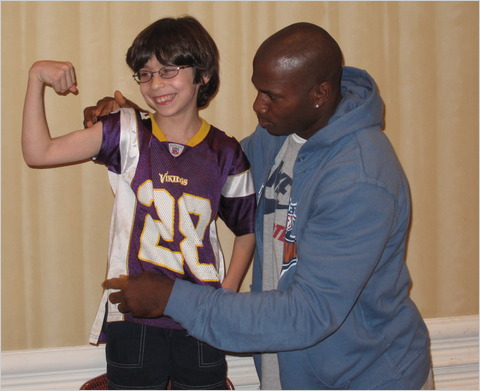 One interview that didn’t make the podcast was with Don Hasselbeck, who played nine seasons as tight end in the NFL. (He also fathered two NFL quarterbacks: Matt and Tim.) Don had more than his share of concussions. Here’s a portion of the interview transcript:

SD: So when’s the first time you remember getting knocked out playing football?

DH: It was 1973, my senior year in high school [La Salle, in Cincinatti] … It was an interception, and I went and tackled this guy and we obviously hit heads. … And every concussion after that, whether it was in the pros or in college, for whatever reason, and I don’t know what — obviously not understanding the brain enough — but I thought I was back in high school. … I could have been in my ninth year of playing for the Giants, and I could have been laying there on the field, looking at my pants and going, “These aren’t mine — we wear red pants at LaSalle.”

SD: I want to know what you think of modern helmet. Your sons — one’s still wearing a helmet, one wore it until recently. You work in the sporting industry [for Reebok], you see a lot of equipment — what do you think of them?

DH: Well, I know they are better. … It’s funny we’re having this conversation, because I have asked my son Matthew to evolve into a better helmet for next year. It’s not so much that he gets hit in the head, but his head strikes the ground — the back of his head — when he gets tackled. … What happens is a player, because he’s in his 12th year, you become comfortable in a certain style of helmet. So every year, you go, “Hey, I want that style.” And it’s a new helmet but it’s an old technology and my point to him was, “Look, if you’re wearing the same technology from 5 or 10 years ago, man, you’re in trouble.” … [But] he just doesn’t like the look, because that’s how football players are. They don’t like to change their look or change the feel. He loves the way that helmet feels. But, I think he’s realizing that it’s probably time to figure out who makes the best one and let’s try to wear that one.

SD: If you were still playing tight end today, surrounded by violence on every play, and wearing the best helmet ever made — do you think it would significantly change the way you played the game?

DH: Oh, no question. I think what you do is you end up using that helmet as weapon. There’s no question. Not so much in my position. But let’s take a defensive position. Where, you know, I would have to run the seam. You’re basically running straight down the field and you have linebackers and in most cases safeties, a strong safety or a free safety, who’s got to come from covering in a zone area. So now, you’ve converged in his zone. Well, when he strikes you, the first thing he strikes you the first things he’s striking you with is his helmet. First of all, I’m 280 pounds running down there, or 250 pounds or whatever. He’s 180, or 200. He’s not gonna hit you with his elbow, or his shoulder. He’s going to drill you with his helmet. I mean, that’s the way we played. If you were to go back and look at any of the films from the seventies and eighties, that’s what everyone did. Guys made the Pro Bowl because they speared people. They spear you with their helmet.

A few days after we spoke, it was announced that Don Hasselbeck is 1 of 20 NFL players to have donated his brain for research to the Center for the Study of Traumatic Encephalopathy at Boston University School of Medicine.

Is there an rss feed for your podcast?
I would like to subscribe through another podcasting app. I can't/won't use itunes

In Canada the issue of head hits in ice hockey is a very hot topic. It seems the issues are similar to what is being discussed about head injuries in football. Let's see if this topic is discussed during the up-coming Winter Olympics in Vancouver, British Columbia, Canada. There won't be a shortage of experts, that's for sure!

When I try to subscribe to Freakonomics Radio, iTunes tells me "Your request could not be completed. The item you've requested is not currently available in the U.S. store." What gives?

Yes, please let's have the rss feed link. I live in Germany, and iTunes says the podcast is not available here.

Has anyone studied the impact of watching professional football on the viewers/fans? I'm convinced they end up with brain damage, too. We call the Super Bowl the Stupor Bowl -- my husband because the games are often the worst of the season and I because watching just makes us stupid.

I have never been able to understand why football helmets do not have a layer of energy-absorbing foam on the OUTSIDE to protect the spearee. There are plenty of space age materials out there that might lessen the impact energy without being inordinately cumbersome.

yes please add a feed that's service agnostic. i don't currently use itunes and love your books. but i don't love it enough to download a program just for ONE podcast... what's my incentive here?

"The item you've selected is not currently available in the US store" :(

unable to suscribe through itunes, is it really up yet?

itunes says your podcast is not available.

Won't let me subscribe in iTunes. Says "The item you've requested is not currently available in the US store".

I'm in Idaho, which is still in the US (last time I checked).

Has the NFL ever looked at putting padding on the outside of helmets?

hmm anyone in the US have luck with this? I clicked on it in iTunes only to be told:

Your request could not be completed.
The item you've requested is not currently available in the US store.

When I try to subscribe via iTunes it says "Your request could not be completed. The item you've requested is not currently available in the US store." Is this only happening to me? Looking forward to hearing the podcast.

"Risk is becoming a luxury good." Catchy quip, but not quite in line with the story you just told. The whole point of not finding Peltzman effects in the world is that risk is actually lessened on the whole. [The behaviour is indeed more reckless, but the increased safety more than compensates.]

Calling a behaviour itself "risky" independent of the mitigating effects of indemnifications (e.g. safety equipment) sounds natural... but you are in fact mixing the formal econ definition with the parochial one and leading to confusion.

"Once risky behaviour is becoming a luxury good, because the wealthy can afford to buy insurance (in the general sense)." That's the point you want to make.

Funny, I think we'll be hearing more and more about helmets and concusssions...

I'm with Will in #1, iTunes is awful please have a RSS feed for this podcast!

I'm getting an error that the requested podcast isn't available in the US store. Help?

Good article on concussions below. Technology is not the only answer, but rule changes also. I'd like my son to play, but not at the expense of his health.