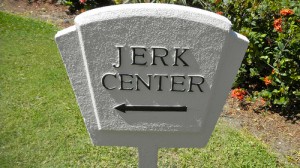 Our latest podcast is called “Legacy of a Jerk.” You can download/subscribe at iTunes, get the RSS feed, listen via the media player above, or read the transcript here.

The gist: what happens to your reputation when you’re no longer around to defend it?

You’ll hear a variety of stories, and theories, about legacy in general and the legacy of jerks in particular. We discuss “strategic jerkitude”; the ancient injunction against speaking ill of the dead; and the fascinating, complicated legacy of Steve Jobs.

The death of a Pennsylvania woman named Carole “Fritzi” Miller Roberson and how lives like hers live on at Legacy.com, where roughly 5,000 new obituaries are posted every day.

You’ll hear about the legacy of the great Pittsburgh Pirate outfielder Roberto Clemente and how his tragic death intersected with one of the brightest moments in Pittsburgh sports history, the “Immaculate Reception” (which inspired a certain little boy to eventually write a certain book

Then you’ll hear the wonderful writer Charlie Leerhsen talk about the subject of his latest book,  Ty Cobb. His reputation lives on today as a) one of the greatest ballplayers ever; and b) one of the nastiest SOB’s ever to play the game. But is that reputation deserved? And how much was that reputation built by one man, the sportswriter Al Stump, who wrote about Cobb again and again?

You’ll hear from a few academics on the topic of jerkitude, including Steve Levitt with a good story about a “faux jerk”; Kathleen Vohs on her study called “Bad Is Stronger Than Good“; and Robin Hanson on the perils and pleasures of managing one’s reputation.

The final act of this episode is all about the legacy of Steve Jobs. You’ll hear from Walter Isaacson, who wrote the seminal Jobs biography

that was published shortly after his death; you’ll hear a bit from Jobs’s iconic Stanford commencement speech in 2005; and you’ll hear from a tech entrepreneur, Brad Wardell of Stardock, who gleaned life lessons from Steve Jobs that weren’t the lessons he thought he’d glean when he set out to read the biography. (HT to “The Lessons of Steve Jobs” at kottke.org.)

Why is Steve Jobs the only name included in your tags? There are a interesting people you talk about in this podcast. While it is true that highlighting his name will get you immediate page views, please don't fall into the idea that Steve Jobs is the only person people want to hear about. I found the Roberto Clemente and Ty Cobb stories equally compelling.

For a good book about this, read "Speaker for the dead" by Orson Scott Card. Anyone who has read it?

As a lifelong Raiders fan who was 11 in 1972 and completely crushed by the Immaculate reception, I see the whole Roberto Clemente story as an opportunity for Mr. Dubner to indulge his admitted Franco Harris and Steelers fanboy-ism. But I'm just a bitter old Radiers fan who has been tortured by that play since I was a child.
Another great show - thanks for all the amazing work.

I'm all for telling it like it is regardless of that person being alive or dead. I thought the coverage of Whitney Houston and Michael Jackson's deaths was ridiculous. Millions of people crying about two people of questionable character.

But I don't understand why Roberto Clemete was included in this podcast. Obviously there's the baseball ties with Ty Cobb but that's all that I can come up with. He has been one of my favorite people for since writing a paper on him in college. My dad bought me his jersey when he went to Pittsburgh and my granpa taped a documentary about him for me. Neither my dad or granpa knew that he was one of my favorites, they did those things because they wanted to make sure that I knew about Mr. Clemente.

If you had a reason to include him in a podcast about jerks then I would definitely want to know what it is. But it was never really established if he did things that were "jerky" that have been forgotten/forgiven because of his tragic death. I've never heard a bad word about him so I would like to know if there's something that I'm missing or if sitting the second game of a double header was a good enough reason to include him.

My impression is that Clemente was used is because he is an example of someone who some considered a jerk who is now essentially canonized. This is in comparison to Ty Cobb, who probably wasn't much of a jerk but whose reputation has been destroyed by a single man.

Another fantastic show. Agree with comment re: Steve Jobs tag, No Legacy.com or even just "Obituaries" tag? Also, there's no excuse for talented athletes, performers, creatives being jerks to hotel staff or others that are not part of their industry and just trying to do their job.

And burning question: what was that vaguely minimal or perhaps electronic music playing in the background throughout?

I'm hard of hearing. You mention a transcript, but I don't see a link. Was it inadvertently left off the post?

We're working on fixing this

Interesting podcast. I found it most telling that one of the excuses to justify Jobs eccentricities was that talented people followed him. I can think of one other person who was particularly infamous and a bunch of people followed him right up until the end.

As well, that guy who had changed his life after reading the Job's book - was he being even truthful? What kind of insane person holds household staff work reviews of their family? The word 'unbelievable' comes to mind.

Here again, even if this guy were being sincere, really begs the question that he exemplifies overreaching for excuses for Jobs. He justifies Jobs' ill manners as a life lesson for himself. Don't you think you could learn the same lesson by looking at yourself grinding on your kid for how well he took out the garbage last week?

Love the theme of this: legacy and how your perceived (and actual) behavior will dictate it—unless someone with a grudge or other agenda intervenes. My favorite segment of this podcast, as it turned out, was the first. The turn of phrase used to describe the mother and the statement that she would "still be missed" despite her flaws had authenticity. It didn't strike me so much as a slam than an acknowledgment that this particular woman could be primarily characterized in terms other than motherhood. (Interestingly, she was called, "a fascinating hostess.") I would rather have a honest obit written, say, on my Facebook page than an airbrushed one. If someone managed to convey my flaws with humor and otherwise treat me with respect, it wouldn't be such a bad thing. Not that it will matter to me, of course—I'll be in a better place. ;)

Frank Lloyd Wright would have been a perfect subject for this show!

I normally love this podcast, but the music selection on this episode makes it barely listenable. Content = good. Constant folksy inane strumming guitar in the background = bad.

This is hilarious, I actually came to this site to find out what that music was because I loved it. Well, here's to different strokes.

There is still no transcripts!!!

Just listened to this episode - loved it! It reminded me of Alfred Nobel, the founder of the Nobel Prize - and how a big part of the reason he created the awards was to avoid his horrible reputation. According to wikipedia:

In 1888 Alfred's brother Ludvig died while visiting Cannes and a French newspaper erroneously published Alfred's obituary.[1] It condemned him for his invention of dynamite and is said to have brought about his decision to leave a better legacy after his death.[1][7] The obituary stated Le marchand de la mort est mort ("The merchant of death is dead")[1] and went on to say, "Dr. Alfred Nobel, who became rich by finding ways to kill more people faster than ever before, died yesterday."[8] Alfred was disappointed with what he read and concerned with how he would be remembered.

I enjoyed the podcast, and get your point, but have to admit that I have never been a Smizik fan and disagree with his assessment of Roberto Clemente. I agree some think he may have been a hypochondriac, but others believe he had ailments that were not recognized by medical experts at that time. Additionally, there was a language barrier. Regardless, few would consider him a "jerk" in life. Was very glad to hear the Immaculate Reception later in the podcast.

Never expected to hear the Pittsburgh angles when I chose the podcast while riding my bike. thanks.

Your three profiles were fascinating; however, I wondered how the story would change had you profiled a famous woman with a similar personality/reputation....Zaha Hadid? My own experience has been that idiosyncracies and difficult personality traits are much more likely to be tolerated or even respected in a man than in a woman. Would love to hear a follow-up story addressing that issue.

What's the name of the first piece of music used in this episode?

In 2009 I was fired from my job at a local nursing home. Offence was Innapropriate remarks about a co-worker. 2 days following my termination, she died. If they thought I spoke harshly of her then..well you know. The state of SD, believing my employer (yes, they rhired me.) denied me un-employment insurance. I had a nice 4 year vacation. Sometimes w/no heat, electrity, and very little food. My comeback interview last week, my former coworker's abuse was downplayed to her 'issues'. And life goes on. I know I'll be walking on eggshells, until I prove myself again there, but, life goes on.