The Secret Consensus Among Economists

If you follow the economic policy debate in the popular press, you would be excused for missing one of our best-kept secrets: There’s remarkable agreement among economists on most policy questions.  Unfortunately, this consensus remains obscured by the two laws of punditry: First, for any issue, there’s always at least one idiot willing to claim the spotlight to argue for it; and second, that idiot may sound more respectable if he calls himself an economist.

How then can the quiet consensus compete with these squawking heads?  A wonderful innovation run by Brian Barry and Anil Kashyap at the University of Chicago’s Booth School Initial on Global Markets provides one answer: Data.  Their “Economic Experts Panel” involves 40 of the leading economists across the US who have agreed to respond on the economic policy question du jour.  The panel involves a geographically and ideologically diverse array of leading economists working across different fields.  The main thing that unites them is that they are outstanding economists who care about public policy.  The most striking result is just how often even this very diverse group of economists agree, even when there’s stark disagreement in Washington.

That observation is the starting point for my latest column with Betsey Stevenson: 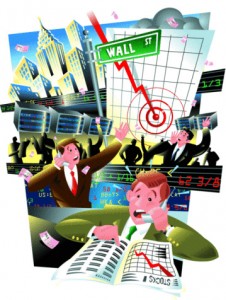 Odds of a Double Dip: A Sampling of Opinions. Plus, Wolfers on Twitter

So by now you're hopefully aware that the stock market completely bombed today. As I type, the Dow is down more than 500 points, its worst day since December 2008. (Official day's tally is -512.76) And just like that it seems, the recovery is over. Well it was fun while it lasted; kind of.

Our resident macro economic guru Justin Wolfers has come up for air from his Twitter experiment (follow him @justinwolfers) and sent over this interesting sample of recent opinions from a handful of economically savvy folks, all giving their odds of the economy entering another recession:

Larry Summers: “at least a 1-in-3 chance.”
Marty Feldstein: “now a 50 percent chance.”
Ryan Avent: “more likely than not.”
Justin Wolfers: “40% chance and peak was 4 months ago” and “The guacamole has spoken.”
Don Kohn, Vincent Reinhart, Brian Madigan: “between 20% and 40%.”
Matt Yglesias: “precisely 31.22%.”
Brad DeLong: “the odds now are 50-50.”
Christy Romer: “The risks have gone up…compared to where we were six months ago.”
Bob Hall: “We certainly are in a more vulnerable situation now.”
Jeff Frankel: “not necessarily enough to push the probability over one half.”
Jay Carney: “we do not believe that there is a threat there of a double-dip recession.”

Justin has had a busy today on Twitter. Clearly, he flipped heads this morning. Here's a sampling of what he's been tweeting about:

It's Election Day: Can You Really Blame the President?

In honor of Election Day, our latest Freakonomics Radio installment on Marketplace asks a question that might make a few political heads explode: how much does the President of the United States really matter? Sure, he’s the “leader of the free world” – but how much unalloyed power does he actually have? Is he more […]

How Would You Simplify the Financial-Reform Bill? A Freakonomics Quorum

Last month, roughly two years into a global financial maelstrom, the U.S. Congress passed a financial-reform bill. It was more than 2,300 pages long, addressing everything from derivatives to consumer financial products to oversized banks. We asked a few clever people a simple question.

In the last couple of hours, the InTrade prediction markets have moved sharply in favor of the Republican candidate Scott Brown to defeat Martha Coakley in the Massachusetts Senate race.

O.K., I’ll admit that I’ve done plenty of hand-wringing about the state of economics. And now I’m going to do something about it. This morning, Brookings announced that David Romer and I will be taking over as the new editors of the Brookings Papers on Economic Activity. We’ve got some pretty big shoes to fill […]

When your co-author is your colleague and also your significant other, confusion often follows. Take this recent post by Arnold Kling on the causes of inequality, where he says: I think that Betsey Stevenson/Justin Wolfers marriages are another big factor. That is, when highly educated men start looking for wives who are stimulating companions as […]

As the Senate and the House look to reconcile competing stimulus plans, the big debate is whether to emphasize government spending or tax cuts. A new paper by the New York Fed’s Gauti Eggertsson argues that the risk of deflation should tilt the balance to government spending. Our current problem is deficient aggregate demand. The […]

A regular blog reader, Mitch Kosowski, sent along an interesting question: “Is ignorance truly bliss? Are people with lower intelligence happier than those with higher intelligence?” Let’s start with a quick literature review. Here are the findings reported by Simpson, L. (2001): Lisa Simpson: “As intelligence goes up, happiness goes down. See, I made a […]

And Fry It Up in a Pan

It's social change alright: 26 percent of working wives out-earned their working husbands in 2006, up by nearly half from 20 years ago.

Now that many more women are graduating college than men, higher-earning wives are going to become the new normal.