Is Income Volatility Really Rising? For Whom?

Jacob Hacker‘s Great Risk Shift described rising income risk over recent decades as an important and quite general phenomenon. While there’s been plenty of controversy around that claim, the most careful analysis I have seen roughly supports Hacker’s contention. (The CBO, using different data and a different methodology disagrees.)

What Hacker actually shows is that the average level of income volatility is rising. But we know that an average can hide as much as it reveals. And this is the point brilliantly developed in a provocative new working paper by my Wharton colleague Shane Jensen, and my former colleague Stephen Shore (full paper available here; warning, there are some econometric pyrotechnics involved).

A stock market analogy might be useful: some stocks are more volatile, some are less, and it is interesting to see what is happening to the volatility of different types of stocks, and not just some mythical “average stock.”

The Jensen-Shore findings are pretty stark and are sure to stir the policy debate: Despite sharp growth since the 1970’s in the average level of income volatility, median income volatility is basically unchanged. (There are some differences in samples and methods between the Jensen-Shore and Hacker analyses, but I would be surprised if that explains much.) 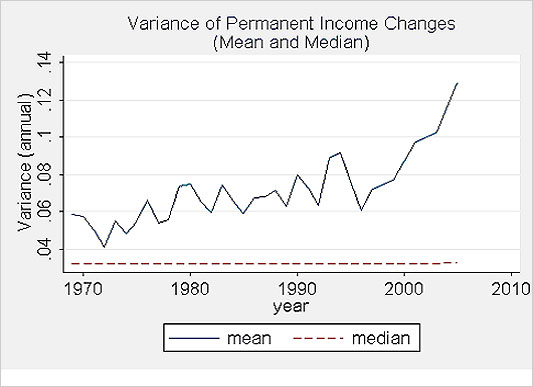 Indeed, there’s been no change in income volatility for most of the distribution: 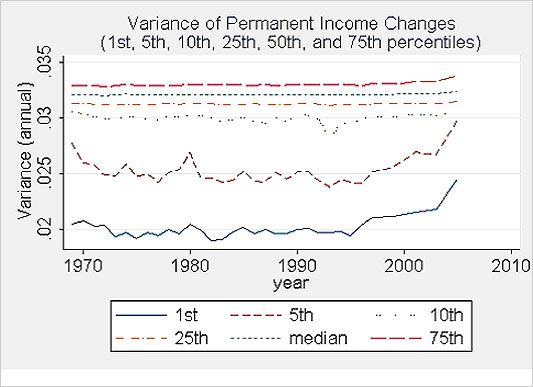 The key driver of rising average levels of income risk is that life among the already risky has become even riskier. Indeed, you really need to look to the riskiest 5 percent of the distribution to find the rise in income risk. And this rise in risk among the already risky is so great as to be responsible for nearly all the rise in average income volatility. And who are these riskiest 5 percent? Jensen and Shore find that they are particularly likely to be self-employed. 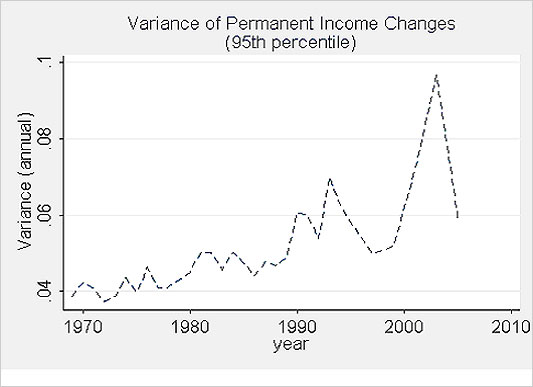 The Jensen-Shore analysis yields an interesting scorecard: Hacker was right on average, but wrong for 95 percent of us.

And as for that earlier Hacker v. CBO debate, perhaps Jensen and Shore have a useful reconciliation. The CBO’s analysis was based on administrative income data, which we typically think of as being better than self-reported income. But in this case, one might imagine that the income swings of the very riskiest 5 percent didn’t show up on their W-2’s (think: entrepreneurs or the self-employed), and hence it is possible that the CBO data missed the rising risk among the riskiest.

You might think that the disconnect between Hacker’s thesis and the actual experiences of most people would have undermined its acceptance. But Hacker’s thesis resonated strongly with many policymakers because it somehow “feels” accurate. Here, I suspect that it is too easy to confuse the feeling that the labor market is riskier than we would like with the actual claim that income risk is higher than it was.

Perhaps the debate about the Great Risk Shift isn’t such a big deal after all: the best argument for a social safety net is that there is too much risk, not that risk has grown.