More Than Just a Haircut

Back when I was a graduate student at MIT in desperate need of a haircut, I stumbled into a place called The Hair Connection. Little did I know it would change my life.

A pleasant woman named Carmella cut my hair, and even offered me a generous student discount. I soon became a loyal customer, dropping in every three to four months, whenever my hair was getting so long that it had started to look embarrassing. Initially, I had a good rapport with Carmella. But then I graduated from MIT and took a position at the Harvard Society of Fellows. That meant I was no longer a student, so I had to give up the student discount. The right thing to do would have been to admit this fact to Carmella and begin paying full price. Instead, I closed myself off, carefully avoiding telling her any details about my academic life, keeping up the charade that I was still a grad student, and thus claiming my student discount.

During one particular visit, Carmella told me about a young lady named Jeannette, who also frequented The Hair Connection. Carmella asked to introduce us, and gave me the young lady’s phone number. I called her, and we went out on a blind date. One of the first things I asked her on the date was, “What did the people at Hair Connection say about me?”

“Carmella said you had a really good job, but she wasn’t sure what it was,” Jeannette responded. So much for my ruse about still being a grad student.

Jeannette, who received her haircuts from Carmella’s associate, Angela, continued, “When Carmella asked if I wanted to be set up, I asked Angela what she thought of you.”

We left Cambridge eleven years ago, and neither of us had spoken to the folks at The Hair Connection since, although we’ve always talked about stopping in when we found ourselves back in Cambridge. A few weeks ago, we finally made good on that promise. We were happy to find the whole gang still there: Carmella, Angela, and Peter, the owner.

It had been three months since my last haircut. Carmella did the honors. This time, I paid full price. 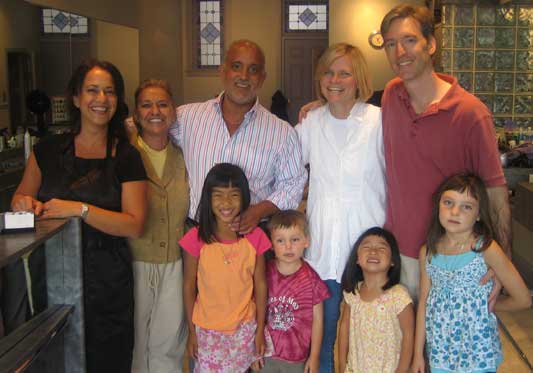